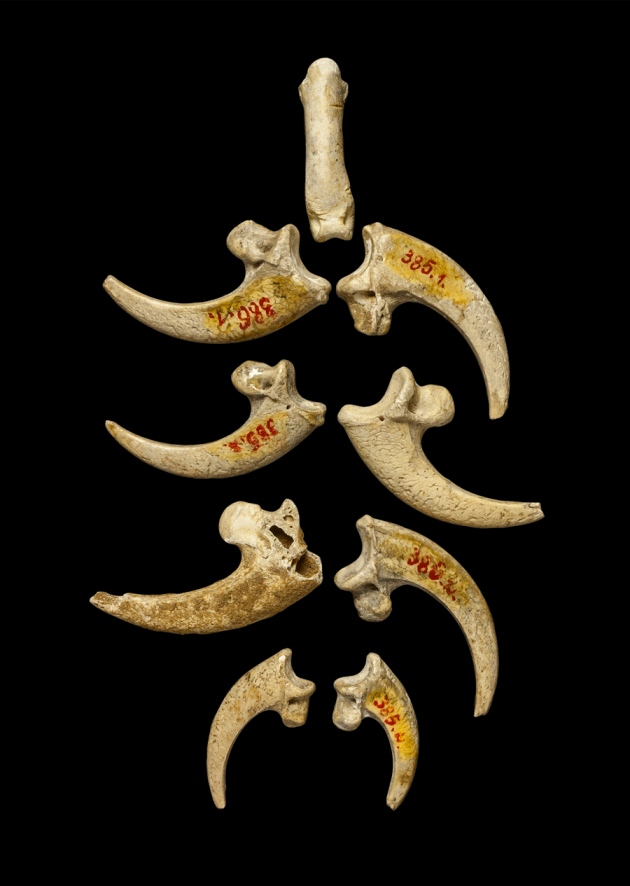 Eight eagle talons from a Neanderthal site in present-day Croatia. Notches, polished facets and smoothed cut marks suggest they were used as jewellery.

Neanderthals hunted mammoths, bison and other powerful animals for food — yet their fiercest foes may have been the massive eagles they snared to make jewellery. The talons of white-tailed eagles found at a Neanderthal site in Croatia show cut marks and patterns of wear that suggest the claws were donned as personal ornaments.

“They’re very powerful birds. It takes a certain amount of bravery and foolishness, even, to catch one of these things,” says David Frayer, a palaeoanthropologist at the University of Kansas in Lawrence, whose team describes the claws in paper published on 12 March in the journal PLoS ONE.1 With wing spans of around 2 metres, the birds are Europe’s largest aerial predator.

The 130,000 year-old talons were discovered more than a century ago in a rock shelter near the town Krapina in northern Croatia. Dragutin Gorjanović-Kramberger, a geologist, dug them up between 1899 and 1905 as part of a trove of animal remains, stone tools and Neanderthal bones and teeth. He sent them to a colleague for identification, and probably never saw the talons again, thinks Frayer: “The cut marks are so obvious that someone like Gorjanović would have seen them.”

Frayer himself saw the talons in 2014, after a curator at the Croatian Natural History Museum in Zagreb re-examined the Krapina material. “I was shaking, almost, when I saw them because I knew how important they were,” he says.

A few raptor talons and feathers — also bearing hints of use as jewellery — have been discovered in other Neanderthal sites, but the Krapina collection of eight talons from at least three different birds is the largest and oldest on record, says Frayer. Some of the cut marks — presumably made when the talons were severed from the birds’ legs — were smoothed over; many of the talons are also burnished.

Frayer sees this as clear evidence that Neanderthals manipulated the claws for use as jewellery pieces such as a necklace or pendant. Some archaeologists have contended that only Homo sapiens had minds capable of such symbolic behaviour, expressed in cave art, jewellery and other artefacts with no obvious practical use.

Clive Finlayson, a zoologist at the Gibraltar Museum, and his team have found eagle and vulture talons in Gibraltar caves that Neanderthals occupied.2 “I have long suspected they were used in a similar fashion, although ours do not have the tell-tale signs of the ones reported here,” he says. Last year, his team reported a cave engraving, possibly made by Neanderthals. “Each discovery of this kind brings the Neanderthals closer to us and shows their advanced symbolic capacities,” he says.