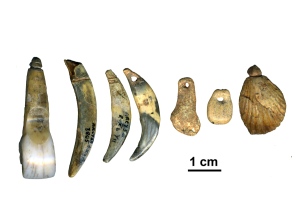 Body ornaments from the Grotte du Renne cave may have been made by Neanderthals copying their human neighbours.

Fossils and artefacts pulled from the Grotte du Renne cave in central France present anthropologists with a Pleistocene puzzle. Strewn among the remains of prehistoric mammals are the bones of Neanderthals, along with bladelets, bone points and body ornaments belonging to what archaeologists call the Châtelperronian culture. Such complex artefacts are often attributed to modern humans, but a new report in the Proceedings of the National Academy of Sciences suggests that Neanderthals created the objects in imitation of their Homo sapiens neighbors1.

How the Grotte du Renne deposit formed has important implications for how we view our extinct sister species. If Neanderthals left the assemblage, then they were capable of a degree of symbolic behaviour thought to be unique to humans.

The remains and artefacts were found together during excavations between 1949 and 1963, but they were not necessarily deposited at the same time. In 2010, Thomas Higham, an archaeologist at the University of Oxford, UK, and his colleagues2 used radiocarbon evidence to argue that the bones and tools were mixed together from higher and lower layers of the cave strata, representing different occupations of the site between 45,000 and 28,000 years ago. Some of the artefacts might have been created by modern humans but then settled down into the Neanderthal layers.

Today, Jean-Jacques Hublin, an archaeologist at the Max Planck Institute for Evolutionary Anthropology in Leipzig, Germany, and his colleagues report in Proceedings of the National Academy of Sciences that the fossils and artefacts were not churned together. The researchers dated 40 bone fragments from several layers in the cave, and found that those in the Châtelperronian layers were between 44,500 and 41,000 years old. None of the dated bones from the Châtelperronian time frame matched dates for higher or lower layers, and Hublin says that this “makes it very unlikely that major admixture occurred.”

Hublin and his colleagues also dated a Neanderthal skeleton found nearby in Saint-Césaire, France, to 40,660–41,950 years ago, within the range of the dates for the bone fragments from Grotte du Renne. This confirms that Neanderthals were present in the region during the time the Châtelperronian layers were deposited.

Hublin suggests that Neanderthals might have created the Châtelperronian ornaments and tools as copycats. On the basis of dates from Grotte du Renne and sites elsewhere in Europe, he says: “Neanderthals produced these novelties at the Grotte du Renne only after modern groups producing the same kinds of objects were present nearby.” The role the artefacts played in Neanderthal social lives in unknown, Hublin says, but he notes that the idea that Neanderthals were capable of creating Châtelperronian objects stretches our “ideological preconceptions” of their cultural lives. Neanderthals have classically been portrayed as dim-witted brutes, but Hublin says that recent studies of the extinct humans, including their association with the the Châtelperronian, indicates that "the emerging picture is more complex than the black and white caricatures about which some have long been arguing".

But the debate over Grotte du Renne shows no sign of ebbing. Francesco d'Errico, an archaeologist at the University of Bordeaux in France, agrees that Neanderthals created the Châtelperronian objects, as he and his colleagues concluded in a PLoS One study last year3, but he is not convinced that radiocarbon dating methods "can be used to make inferences about modern human-Neanderthal interactions". Studies of the stratigraphy of Grotte du Renne, d'Errico says, "should be given priority" over radiocarbon dating in determining the association between the artefacts and Neanderthal remains.

Higham is sceptical of Hublin’s conclusions for different reasons, and maintains that the cave layers still may have been mixed together. “I think there are some serious methodological problems at work here,” Higham notes, including “poor selection of samples” of bone fragments that may or may not actually be from Neanderthals. “This invites problems because they could be dating the presence of animals like hyaenas, rather than people,” Higham points out.