A three-dimensional reconstruction of the etchings found on a cave floor in Gibraltar.

It looks like a game of tic tac toe, but engravings found deep inside a cave in Gibraltar might be a Neanderthal masterpiece. At more than 39,000 years old, the etchings rival in age the oldest cave art in Europe — and they are the first to be unquestionably done by a Neanderthal, claim the researchers who discovered them1. Other scientists, however, say that the artwork's attribution is not an open-and-shut case.

Archaeologists uncovered the engravings in Gorham’s Cave, a site overlooking the Mediterranean Sea. A team led by zoologist Clive Finlayson, the director of the Gibraltar Museum, has been excavating the cave since the late 1980s. The researchers found that the Neanderthals who called the cave home ate fish, shellfish and birds, and perhaps survived later than their counterparts elsewhere in Europe.

But in July 2012, Finlayson's colleague Francisco Pacheco crawled on the cave floor through a narrow passage to reach the very rear of the chamber, and happened on the etchings, carved on a horizontal platform that is elevated 40 centimetres from the bedrock, like a natural coffee table. “We started to shine the torch in different directions and we started to see the relief of this thing. It’s not immediately obvious,” says Finlayson. The drawings cover an area of about 20 by 20 centimetres, roughly the size of a Frisbee, and are up to a few millimetres deep.

Rock art is notoriously tricky to date because it is not immediately linked to human or animal bones that can be carbon-dated. Finlayson, however, is confident that the etching was made by Neanderthals more than 39,000 years ago. A layer of sediment that once covered the engraving contained stone tools typical of those made by Neanderthals dating to between 30,000 and 39,000 years ago. This means that the engraving must be even older, Finlayson says, perhaps 40,000 to 45,000 years old. Humans did not arrive at Gorham’s Cave until more than 10,000 years later, and long after Neanderthals were gone. 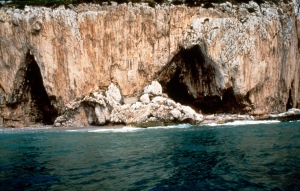 The entrance to the cave where researchers found what they say is ancient Neanderthal art.

The team's dating of the Gorham etching makes it one of the oldest examples of cave art in Europe. A smudge of pigment in the Cave of El Castillo in northern Spain dates to more than 40,000 years ago, but it is not clear whether Homo sapiens or Neanderthals created it2.

To better understand the engraving, Finlayson’s team tried replicating them using original Neanderthal stone tools. They found that only dozens of purposeful, repeated motions could create similar etchings. “We wanted to show that this was not a doodle, a casual thing,” he says, unlike the helter-skelter scratchings that the authors left when they sliced fresh pork skin on rock, for instance. The team's results appear in this week's Proceedings of the National Academy of Sciences1.

What the signs mean, however, is anyone’s guess. “Is it art? I don’t know. I can’t get into the minds of these people. It looks geometric. It looks like criss-cross patterning,” and perhaps it represents some kind of map, says Finlayson. “What is clear is that it’s abstract, it’s deliberate, and it speaks to their cognition in a way that brings Neanderthals, once again, closer to us.”

Alistair Pike, an archaeologist at the University of Southampton, UK, says that the engravings, if made by Neanderthals, represent a very important find. “It adds permanent rock engraving to the sparse but significant evidence for Neanderthal symbolic behaviour.” Ochre pigment, shell beads and other adornments have also been used to back the idea that Neanderthals possessed the sorts of symbolic cognitive powers that underlie language and religion (see 'Neanderthal culture: Old masters').

But Harold Dibble, an anthropologist at the University of Pennsylvania in Philadelphia, has misgivings about the engraving, as well as the identity of its maker. Sediments tend to shift around a cave, and it is possible that humans made the etchings, only for them to be later covered up by older sediments from prior Neanderthal occupations, he says. Moreover, Dibble questions the importance of abstract scratchings, which also appear on animal bones at Neanderthal sites. “It takes more than a few scratches — deliberate or not — to identify symbolic behaviour on the part of Neanderthals.”