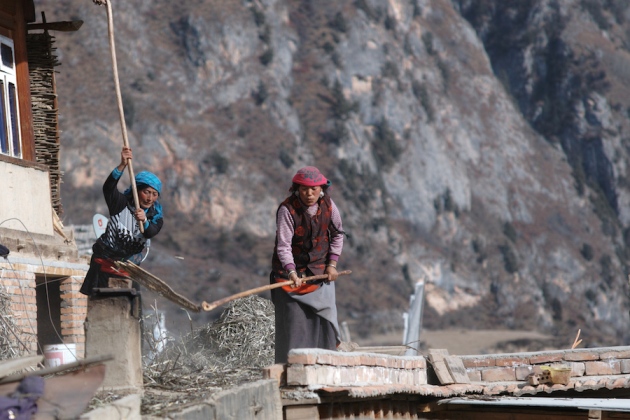 Our ancestors were not a picky bunch. Overwhelming genetic evidence shows that Homo sapiens had sex with Neander­thals, Denisovans and other archaic relatives. Now researchers are using large genomics studies to unravel the decidedly mixed contributions that these ancient romps made to human biology — from the ability of H. sapiens to cope with environments outside Africa, to the tendency of modern humans to get asthma, skin diseases and maybe even depression.

The proportion of the human genome that comes from archaic relatives is small. The genomes of most Europeans and Asians are 2–4% Neanderthal1, with Denisovan DNA making up about 5% of the genomes of Mela­nesians2 and Aboriginal Australians3. DNA slivers from other distant relatives probably pepper a variety of human genomes4.

But these sequences may have had an outsize effect on human biology. In some cases, they are very different from the corresponding H. sapiens DNA, notes population geneticist David Reich of Harvard Medical School in Boston, Massachusetts — which makes it more likely that they could introduce useful traits. “Even though it’s only a couple or a few per cent of ancestry, that ancestry was sufficiently distant that it punched above its weight,” he says.

Last year, Reich co-led one of two teams that catalogued the Neanderthal DNA living on in modern-day humans5, 6. The studies hinted that Neanderthal versions of some genes may have helped Eurasians to reduce heat loss or grow thicker hair. But the evidence that these genes were beneficial was fairly weak.

To get a better handle on how Neanderthal DNA shapes human biology, Corinne Simonti and Tony Capra, evolutionary geneticists at Vanderbilt University in Nashville, Tennessee, turned to genome-wide association studies (GWAS) that had already compared thousands of DNA variants in people with and without a certain disease or condition.

Using de-identified genome data and medical records from 28,000 hospital patients, Simonti and Capra looked for differences in traits and medical diagnoses between people with a particular Neanderthal gene variant and those with the H. sapiens version of the same gene. They found that the Neanderthal variants seemed to slightly increase the risk of conditions such as osteo­porosis, blood-coagulation disorders and nicotine addiction. Another analysis, which looked at the combined effects of many DNA variants, painted a more mixed picture. It revealed links between Neanderthal DNA and depression, obesity and certain skin disorders, with some variants being associated with an increased risk and others with a reduced risk. Simonti presented the data at the annual meeting of the Society for Molecular Biology and Evolution in Vienna on 15 July.

Neanderthal gene variants, like most human variants, had only a tiny effect on the risk of developing these conditions, notes Capra. But seeing Neanderthal genes involved in skin disorders, including lesions triggered by sun exposure, chimes with previous studies linking Neanderthal DNA to skin biology, he says.

In some cases, the effects of the archaic genes may have changed over the ages. Simonti and Capra also reported at the Vienna meeting that blood-coagulation disorders experienced by modern humans could be related to Neanderthal immune genes, although previous studies have suggested that archaic immune genes may have helped H. sapiens to cope with diseases that they encountered outside Africa.

Also at the meeting, a team led by Michael Dannemann, a computational biologist at the Max Planck Institute for Evolutionary Anthropology in Leipzig, Germany, reported that many humans have Neanderthal and Denisovan versions of genes that encode proteins called toll-like receptors (TLRs), which sense pathogens and launch a rapid immune response. Furthermore, cultured human cells containing the archaic versions tended to express the TLRs at higher levels than cells with the H. sapiens versions7. Although previous GWAS linked the archaic versions to a reduced risk of Heliobacter pylori infection, which can cause stomach ulcers, the variants were also associated with higher rates of allergies.

“Many traits that were adaptive 10,000 years ago might be maladaptive today” because of lifestyle, diet and other shifts, notes Rasmus Nielsen, a population geneticist at the University of California, Berkeley.

At least one archaic trait has clear benefits in contemporary humans. Last year, Nielsen’s team reported that the Denisovan-like version of a gene called EPAS1 helps modern Tibetans to cope with life at altitudes of 4,000 metres, by preventing their blood from thickening8.

Many researchers see Nielsen’s EPAS1 discovery as the poster child for humans’ archaic biology, because the benefits of the Denisovan version are so clear-cut. But proving such insights rests on laborious studies, including engineering mice to carry the archaic mutations and exhaustively testing the animals’ biology, notes Reich. “Each new finding is going to be very hard won.”