Nature Video travels back 50,000 years to find out when the Neanderthals disappeared and how Homo sapiens came to dominate Europe.

Neanderthals and humans lived together in Europe for thousands of years, concludes a timeline based on radiocarbon dates from 40 key sites across Europe. The results1, published today in Nature, may help to end a century-old deadlock over the demise of the Neanderthals and their relationship to humans.

The researchers used 196 radiocarbon dates of organic remains to show that Neanderthals disappeared from Europe around 40,000 years ago, but still long after humans arrived in the continent. “Humans and Neanderthals were living contemporaneously for quite some period of time in different parts of Europe,” says Tom Higham, an archaeologist at the University of Oxford, UK, who led the study. The long overlap provided plenty of time for cultural exchange and interbreeding, he adds.

Exactly what happened 30,000–50,000 years ago still vexes archaeologists because the period is right at the limit of accurate radiocarbon dating. The technique is based on measuring the steady loss of radioactive carbon-14 molecules in organic remains. But after 30,000 years, 98% of the isotope is gone and younger carbon molecules are starting to infiltrate bones, making remains seem younger than they are. This means that dates for the final Neanderthals and for the first human occupations of Europe have been unreliable, fomenting the debate.

But over the past decade, Higham and his team have developed techniques that provide more accurate readings in bones up to 55,000 years old (see Nature 485, 27–29; 2012). First, they use a chemical pretreatment to remove the contaminating carbon from the collagen in bones, then they measure the minuscule amounts of radiocarbon using a particle accelerator.

Tom Higham discusses dating the disappearance of Neanderthals from Europe

The technique has allowed the researchers to redraft the prehistory of Europe cave by cave, and show that early humans arrived in southwestern England2 and Italy’s ‘heel’3, for example, well over 40,000 years ago. They have now applied the technique to Neanderthal occupations across Europe, which are associated with stone tools known as Mousterian artefacts. From the Black Sea to the Atlantic coast of France, these artefacts and Neanderthal remains disappear from European sites at roughly the same time, 39,000–41,000 years ago, Higham’s team conclude. The data challenge arguments that Neanderthals endured in refuges in the southern Iberian Peninsula until as recently as 28,000 years ago4.

Humans, argues Higham’s team, were in Italy as early as 45,000 years ago, where they developed a stone-tool culture known as the Uluzzian industry. The team estimates that humans and Neanderthals overlapped for up to 5,400 years in parts of southern Europe, yet to a much lesser extent or not at all in other parts of the continent. “They were certainly in the same areas,” Higham says.

The coexistence also supports a controversial idea that some Neanderthal artefacts, such as shell beads and stone tools of the Châtelperronian industry that appeared in France and Spain more than 40,000 years ago, emerged from contact with humans, Higham says.

“I absolutely agree with Tom,” says Paul Mellars, an archaeologist at the University of Cambridge, UK, who has long championed the idea that Neanderthals borrowed technologies from humans. “There would be opportunities for contacts or interactions thousands of times in most, if not all, areas of Europe,” he says. 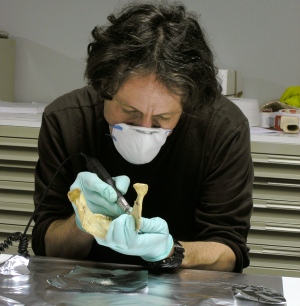 Archaeologist Tom Higham has dated Neanderthal jawbones and other samples from across Europe.

Others are more sceptical. Clive Finlayson, director of the heritage division at the Gibraltar Museum whose team dated the 28,000-year-old Neanderthal charcoal remains from the tip of Gibraltar4, questions the timeline’s sweeping conclusions. Archaeologists are unlikely to ever find the last Neanderthal occupation, he argues, and the methods that Higham’s team used to remove contamination do not work well for bones from warmer sites because collagen is not preserved as well there as in cooler sites. This would be the case in southern Iberia, where Finlayson believes the last Neanderthals lived. “I’m hugely worried that we’re building a castle in the air here,” he says.

Meanwhile, Higham hopes that the timeline will address other mysteries surrounding Neanderthals, such as why they died out and how they interacted with humans. DNA recovered from remains in Europe and western Asia, for example, show that humans and Neanderthals interbred more than 50,000 years ago, probably as the common ancestor of Europeans and Asians emerged from Africa.

There is still no evidence that humans and Neanderthals interbred while in Europe, but thousands of years of overlap makes sex more likely, Higham says. “I do like the idea that they aren’t really extinct and they do live on in us.”