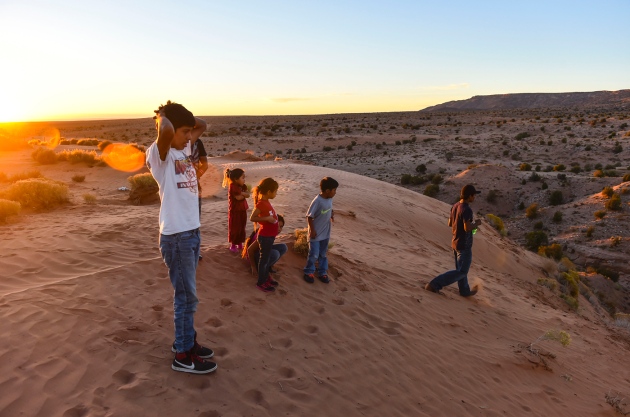 Children play on the Navajo Nation's vast reservation in the southwestern United States.

When the Navajo Nation opens its first oncology centre next year in Tuba City, Arizona, clinicians there may be able to offer a service that has been banned on tribal lands for 15 years: analyzing the DNA of Navajo tribe members to guide treatments and study the genetic roots of disease.

That's because the Navajo, the second-largest Native American group in the United States, are considering whether to lift their longstanding moratorium on genetic research. The tribal government banned DNA studies in 2002 to prevent the misuse of its members' genetic material. Although there is still some apprehension about the risk of allowing researchers access to Navajo DNA, the tribe's leaders increasingly see genetic research as a tool to improve medical care for the 174,000 residents of their sprawling reservation, which is roughly the size of Scotland.

As it now stands, Navajo people who live on the reservation must drive hundreds of kilometres to access specialized medical care off tribal lands, in large cities such as Phoenix, Arizona. “We spend millions of dollars outsourcing [care] for cancer and diabetes,” says Walter Phelps, a delegate to the Navajo Nation Council. As the tribe — a nation independent of the United States — tries to expand the health services it offers to its members, he says, “the moratorium could become a barrier when blood and tissue have to be collected”.

Phelps is working on the effort to create a policy by which the Navajo Nation would approve genetic-research projects and maintain control of DNA samples. The research-ethics board run by the tribal government’s department of health is working with tribal officials and traditional leaders and holding a series of public hearings to solicit opinions on the matter from tribe members. The group hopes to deliver a draft proposal by the end of October. Whatever the tribe decides could influence the hundreds of other Native American groups, who have tended to be wary of genetic studies because of a history of scientists conducting research without consent or adequate privacy controls.

The Navajo Nation's new oncology centre provides part of the impetus for revisiting the genetic-research ban. It will be the first such facility on Native American lands outside of Alaska. Allowing some genetic testing at the centre could help physicians to identify the most effective therapies for each patient, says Lynette Bonar, chief executive of the Tuba City Regional Health Care Corporation in Arizona, which will run the facility.

That would match the standard of care that many Navajo people with cancer have received at medical facilities off the reservation. And creating a repository for such genetic material on Navajo land would enable research into the genetic and environmental factors underlying a broad range of diseases, not just cancer.

So far, Phelps says, the idea of allowing some genetic research has not drawn major opposition. Many tribe members consulted about lifting the moratorium have generally supported the idea after learning how physicians could use genetic data to diagnose disease and tailor treatments. And the number of Navajo tribe members who are geneticists and medical experts has grown since 2002, bolstering the tribe’s ability to evaluate proposed protocols and represent its own interests.

Still, some Navajo have lingering questions about whether the tribal government can protect the privacy of their genetic material and maintain control over its use. Such concerns helped to shape the current ban back in the early 2000s, when the Navajo Nation’s department of health conducted an outreach campaign about genetics and medical research. “In the absence of a research code and lack of expertise at the time, they decided it was not a good time to move forward with genetic research until they were able to develop a research policy,” says Nanibaa’ Garrison, a member of the Navajo Nation who is a geneticist and bioethicist at Seattle Children’s Hospital in Washington.

The tribe had reason to be cautious. “As Native Americans, we have a problem with trust because we have been violated so much,” says David Begay, a pharmaceutical scientist at the University of New Mexico in Albuquerque and a member of the Navajo Nation’s human-research review board. “In the past, our data have been misused."

Native Americans in the southwestern United States want to avoid repeating the experience of the region's Havasupai tribe. In 2004, the group sued Arizona State University in Tempe over alleged misuse of tribe members’ blood samples. The Havasupai said that the samples, which had been collected for diabetes research, had later been used in studies of schizophrenia, migration and inbreeding without their consent. The university made a settlement with the tribe in 2010, paying US$700,000 and returning the blood samples.

Sara Hull, a bioethicist at the US National Human Genome Research Institute in Bethesda, Maryland, says the case helped to change how researchers engage with the people they study, by raising awareness of the complexities of dealing with vulnerable minority populations. For Native Americans, such thorny issues can include privacy. Science-funding agencies and journals often require researchers to put the genetic data they collect into public repositories, but the relatively small size of many Native American tribes can make it easy to identify individual members in a genetic data base. In recognition of this, the US National Institutes of Health sometimes works with researchers it funds to develop methods for sharing data on a minority group without compromising its privacy.

Garrison, who is helping the Navajo Nation develop its new policy, says that the plan is likely to include rules on what types of research will be allowed, who will have access to tribe members’ genetic material and information, and who will provide oversight. It is also likely to require that the tribe maintain ownership of its members’ DNA samples and data.

The policy that the Navajo Nation ultimately produces could serve as a template for other Native American groups considering how — or whether — to engage with genetic research, says Ellen Clayton, a bioethicist at Vanderbilt University in Nashville, Tennessee. She expects other tribes to watch the development of the Navajo Nation’s new policy. “If they reach an agreement, I think it will be influential.”