Consolidation is afoot in scientific publishing. Macmillan Science and Education, the London-based publisher of Nature and Scientific American, will merge with Berlin-based Springer Science+Business Media, one of the world’s largest science publishers, their parent companies announced today.

The joint venture, which combines the publishing portfolio of Macmillan Science and Education with Springer, would create a firm with some 13,000 employees and a turnover of around €1.5 billion, the companies said.

The deal was agreed by Holtzbrinck Publishing Group (the private firm that owns Macmillan, including Nature) and the private equity firm BC Partners, which in 2013 bought out Springer in a deal worth around €3.1 billion. Holtzbrinck will own 53% of the combined venture, and anticipates that the deal will be approved by competition authorities in the first half of 2015.

“The deal makes a lot of sense for both sides,” says Claudio Aspesi, a media analyst with Sanford C. Bernstein & Co. in London. “From BC Partners’ perspective, there were a lot of questions about what they could do with Springer when they bought it, since much cost-cutting had already been done. Now we know how you can add value to that deal — add the most prestigious journals in the world. For Holtzbrinck, the idea is presumably that they get additional scale for Macmillan, which will give additional funds for any new plans.”

The scientific publishing market is dominated by the so-called ‘big four’ companies: Springer (which reports hosting 2,987 journals), Elsevier (3,057), Wiley (2,339) and Taylor & Francis (2,105). Together, they comprise around 30% of the world’s total scholarly peer-reviewed journals, which number 34,585 (28,134 English language), according to Ulrichsweb, an online directory of scholarly journals. There follows an enormous number of smaller publishers: Macmillan publishes only 160 journals, but many of them bear the well-known Nature brand. “Combined, these two companies, both deeply rooted in a strong publishing tradition, offer breadth, volume and reach,” said Derk Haank, CEO of Springer, which is also the world’s largest publisher of open-access journals. 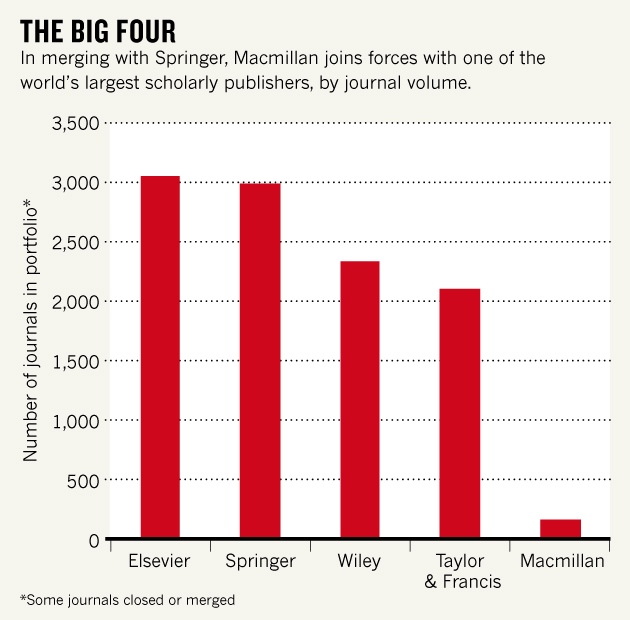 Exactly where the merger leaves the combined company in the science journal publishing market depends on which financial figures one chooses to quote. Elsevier reported £2.1 billion  revenues in 2013 (€2.7 billion), while its parent company, Reed Elsevier, made £6.6 billion, but only £1.1 billion of that is from science journals, Aspesi estimates. Two other science publishers, Pearson (€5.2 billion) and Wolters Kluwer (€3.6 billion) are also larger companies, but have far smaller footprints in journals. Pearson has no journal revenues and focuses on news media, education and books, whereas Wolters Kluwer has only a small medical journals business. The new combined firm would also have a big presence in textbooks, as Springer already publishes more than 8,000 books each year.

No one would comment on the financial structure of the merger. A person with knowledge of the deal said that it was likely that BC Partners would seek to cash out its 47% share via an initial public offering in 2–4 years, and hoped that the merger would lead to stronger growth for the combined company.

But librarians who negotiate with science publishers expressed concern at the deal. "Are mergers good for users? The philosophy of the commercial market is that competition works to bring prices down. On that basis, the concentration of such large publishing volumes in one pair of hands is not good news for users," says Paul Ayris, director of library services at University College, London. "On the other hand, time will tell. Will there be efficiencies by working at such scale, which will reduce costs? We will have to see."

David Prosser, executive director of Research Libraries UK, says that his organization "will work with other library organizations worldwide to ensure that the proposed merger receives suitable scrutiny from the appropriate competition authorities”.