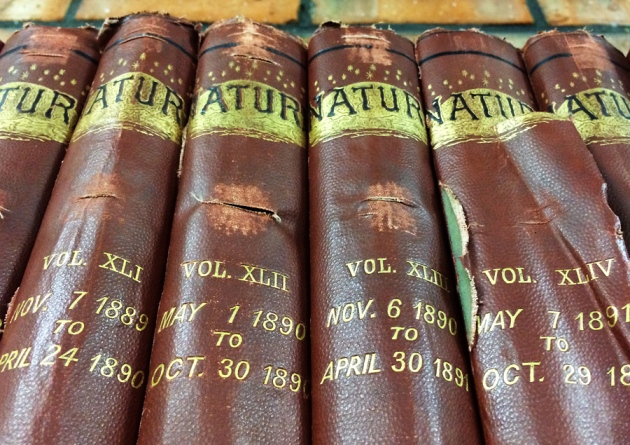 Nature will make its articles back to 1869 free to share to be read online but not to be printed or downloaded.

All research papers from Nature will be made free to read in a proprietary screen-view format that can be annotated but not copied, printed or downloaded, the journal’s publisher Macmillan announced on 2 December.

ReadCube, a software platform similar to Apple’s iTunes, will be used to host and display read-only versions of the articles' PDFs. If the initiative becomes popular, it may also boost the prospects of the ReadCube platform, in which Macmillan has a majority investment.

Annette Thomas, chief executive of Macmillan Science and Education, says that under the policy, subscribers can share any paper they have access to through a link to a read-only version of the paper’s PDF that can be viewed through a web browser. For institutional subscribers, that means every paper dating back to the journal's foundation in 1869, while personal subscribers get access from 1997 on.

Anyone can subsequently repost and share this link. Around 100 media outlets and blogs will also be able to share links to read-only PDFs. Although the screen-view PDF cannot be printed, it can be annotated — which the publisher says will provide a way for scientists to collaborate by sharing their comments on manuscripts. PDF articles can also be saved to a free desktop version of ReadCube, similarly to how music files can be saved in iTunes.

“We know researchers are already sharing content, often in hidden corners of the Internet or using clumsy, time-consuming practices,” said a statement by Timo Hannay, the managing director of Digital Science, a division of Macmillan that has invested in ReadCube. “At Digital Science we have the technology to provide a convenient, legitimate alternative that allows researchers to access the information they need and the wider, interested public access to scientific knowledge, from the definitive, original source,” Hannay said.

The policy comes as research funders are increasingly mandating that scientists make their papers free to read, download and reuse in various other ways. Nature and its sister journals already allow scientists to freely archive online the peer-reviewed manuscripts of their papers, but only after a delay of six months following publication. And papers published in some NPG journals — 38% of all papers NPG published this year, says Thomas — are already being made free to read immediately on publication, a ‘gold open-access’ model in which publishers charge authors or their funders, rather than subscribers, for publishing each paper.

But Thomas says that she expects that the subscription and the open-access business models would exist side by side for a long time to come. Philip Campbell, the editor-in-chief of Nature and the other Nature-branded journals, has said that Nature's internal costs of publishing run at £20,000–30,000 (US$31,000–47,000) per paper, an extremely high charge to load onto authors or funders rather than spread over subscribers.

Initial reactions to the policy have been mixed. Some note that it is far from allowing full open access to papers. “To me, this smacks of public relations, not open access,” says John Wilbanks, a strong advocate of open-access publishing in science and a senior fellow at the Ewing Marion Kauffman Foundation in Kansas City, Missouri. “With access mandates on the march around the world, this appears to be more about getting ahead of the coming reality in scientific publishing. Now that the funders call the tune and the funders want the articles on the web at no charge, these articles are going to be open anyway,” he says.

Peter Suber, director of the Office for Scholarly Communication at Harvard University in Cambridge, Massachusetts, says that the programme is a step forward by providing immediate free online access, in contrast to Nature's self-archiving open access policy, which still requires a six-month embargo. But, he notes, if authors prefer to share links rather than actually deposit their manuscripts in an online repository, the programme could be a step backward, because repositories host copies independently from the publisher, and those copies can be printed or saved and are generally more reusable than a screen-only file.

Thomas says that the publisher intends the policy as a pilot and will be evaluating it over the coming year. She says that she expects libraries and personal users to continue to subscribe to the journal, but also that scientists would embrace the new sharing model. Other science publishers, such as Wiley, use ReadCube to display preview versions of their papers, so it is possible that the same idea might spread to others, Thomas adds.

The original headline on this article gave an exaggerated impression of the way in which content from Nature journals can now be accessed. As the story makes clear, read-only sharing must be facilitated by a subscriber.

The article has been altered to clarify that the new programme, allowing authors to provide an immediate link to a screen view of their article, runs alongside the six-month embargo NPG places on authors self-archiving manuscripts in online repositories. The six-month self-archiving embargo remains.