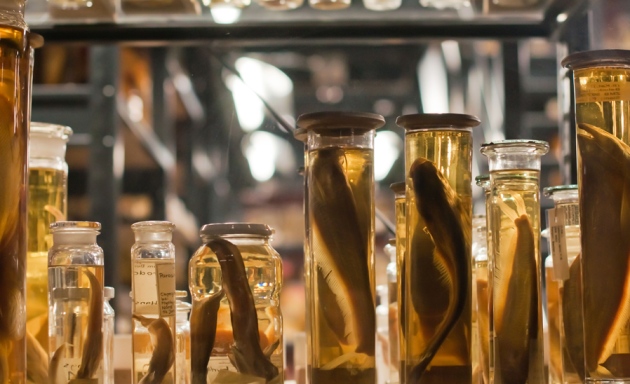 Biological samples held in university museums are under increasing threat.

For decades, US college dramas and films have polarized the nation’s academic communities into jocks and nerds. Nature, naturally, would tend to side with the latter. So, it’s alarming to learn that the jocks at the University of Louisiana at Monroe (ULM) want to ditch a valuable (maybe even nerdy) collection of scientific samples to upgrade their running track.

Some 6 million preserved fish and 500,000 plant specimens, collected over many years by two now-retired researchers at the institution, are stored in a building at the university’s Brown Stadium. The planned improvements to the university’s sports facility threaten them with destruction unless they are moved.

In response to a public outcry, the university rushed out a statement on 30 March saying that it wanted to donate the collections, and that by mid-July they would “hopefully have a new home”. Discussions about which other institutions could take these specimens, saving them for future scientific work, are continuing.

Eric Pani, vice-president for academic affairs at ULM, says he regrets that the university will no longer have these collections on campus, but financial pressures mean that tough choices have to be made, and the university is doing “the responsible thing to ensure their proper use”. He adds: “To say that ULM prioritizes athletics over academics is just untrue.”

As the scientific community has made abundantly clear to ULM, natural-history museum collections — which are under threat across the United States and worldwide — are not just dusty old animals and plants in drawers and jars. They are resources that help us to understand our planet. And ULM’s collections are proudly local: the herbarium is believed to hold samples of more than 99% of the plants found in the state. So they could help scientists to find out how the local flora has changed, and how it might be affected by future pressures.

In recent years, Nature has published much on the importance of such collections. New species are routinely discovered by curators as they examine collected creatures. In some cases, these species are no longer with us — all that remains are their remains.

At the same time, digitization is opening up collections to an ever-widening pool of researchers. Many collections can now be seen online, and more are moving there. On 3 April, the Royal Botanic Gardens, Kew, in London launched Plants of the World Online — a project that it hopes will include information on all the world’s known seed-bearing plants by 2020. World Flora Online, a related project run by an international consortium, aims eventually to create a full inventory of all plant life.

“In some cases, these species are no longer with us — all that remains are their remains.”

Adding computed-tomography scans, isotope data and genetic data will turn online collections into hugely powerful tools for researchers. But this does not mean that the physical specimens can be discarded. New technologies will emerge that researchers will be able to apply to the things preserved by long-gone scientists.

And although the Internet is often accused of driving the decline in use of some bricks-and-mortar establishments, it could benefit museum collections. Now that scientists can rapidly identify which items are kept where, and what data are available on them, access can become easier and more productive. Digitization enhances the value of the specimens, but it does not dispense with the need to have them: for some work, having the physical items is essential.

Of course, universities and funding agencies are financially constrained, and it’s easy to see why boxes of dead things in a disused basement might not seem worth saving. ULM says that its collections were not being used much. But if that’s so, it’s likely to be because they were neglected by those allocating resources, not because they weren’t useful. To be useful, such collections must be used.

There is hope. Last year, 120,000 specimens from the Tulane University Herbarium in New Orleans, Louisiana, were moved to Louisiana State University in Baton Rouge, to become part of its collections. Other collections have also moved there in recent years.

Bringing collections together in regional hubs could be a good option. It will make them more cost-effective to maintain, and will turn them into one-stop-shops for biologists, preserving the link to local ecosystems and enabling them to continue serving their region. If nurtured, such growing collections will attract visiting scholars and funding. Institutions that give up their hard-won jars of fish and files of plants will one day look enviously at what they have discarded.

If ULM cannot see the value in its collections, others can. And if the university wants to be taken seriously as a place of learning, it should make a gesture towards those outraged by the handling of these plants and fish. The least it could do is offer to pay the cost of moving the collections to their new, more welcoming homes. Dare we nerds suggest to the jocks a fundraising track meet at the stadium? Go Warhawks!