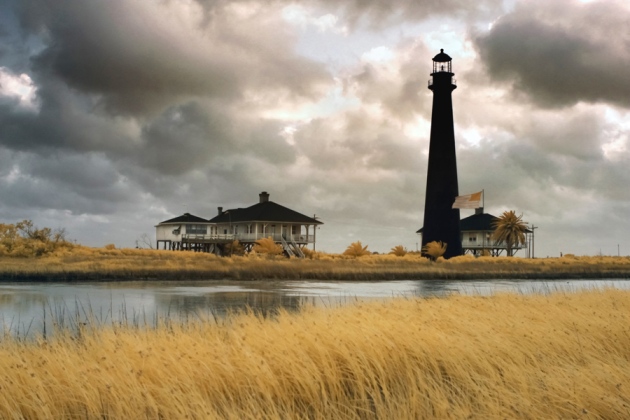 Intact coastal ecosystems, such as this marsh in Port Bolivar, Texas, help shield communities from extreme weather and rising seas.

Coastal forests, coral reefs, sand dunes and wetlands are just a few of the natural habitats that protect two-thirds of of the US coastline from hazards such as hurricane storm surges — shielding not only high-value properties in New York and California but also the poor in Texas and the elderly in Florida.

By the end of the century, 2.1 million people and US$400 billion to US$500 billion of residential property will be exposed to the highest hazard risk. But if protective habitats are lost, the number of people and total property value at risk could double, according to work published today in Nature Climate Change1.

“Where we’ve got these ecosystems intact, we need to keep it that way. Otherwise, massive investments will be required to protect people and property,” says author Katie Arkema, a marine ecologist in Seattle, Washington with the Natural Capital Project, headquartered in Stanford, California. The work presents the first map of the US coastline that identifies where and how much protection comes from different habitats.

“This is ground-breaking work to show the extent to which habitats may protect property and people along the coastlines of the entire United States under different climate-change scenarios — no one’s done that before,” says Edward Barbier, a natural-resource economist at the University of Wyoming in Laramie, who published a study in March demonstrating that the presence of marshes in Louisiana could reduce storm property damage2.

This study comes at a time when coastal-defence planning is under way in areas, such as New York city and Louisiana, that were hit hard by recent hurricanes. Increasingly, plans are moving beyond solely engineered solutions, such as levees or seawalls, to include conservation-based protection measures such as wetland restoration and dune creation.

Study co-athor Peter Kareiva, chief scientist at the Nature Conservancy, a conservation organization based in Arlington, Virginia, says that the models used in their work could help further a global movement to take stock of the coastal protections afforded by natural habitats. “It really is going to get to the point where we’ll be able to put dollar values on what we gain from restoring natural habitats,” he says.

Arkema and her colleagues took the ambitious step of synthesizing a hazard model for the US coast, that took into account ecosystem data, projected climate scenarios, socio-economic data and property values to identify where habitats offered the greatest coastal protection. They identified nine habitats — including coral and oyster reefs, wetlands, dunes, seagrass beds and kelp forests — and ranked the level of protection each gave. They then scored each 1-kilometre strip of coastline to tally the total protection by habitat in an area.

The team also created a hazard index based on physical and biological variables that influence exposure to sea-level rises or to storm surges. “We have to look at the shoreline elevation, wave exposure, and whether it’s rocky or muddy to determine where habitats become important for protection,” says Arkema. The researchers identified areas with the highest exposure to flooding and erosion under five current and future climate scenarios—with and without habitat. The final step, overlaying the social variables on top of the hazard index, indicated that coastal habitats in Florida, New York and California defend the most people as well as the greatest amount in property values from storm surges.

Rob Thieler, a coastal geologist at the US Geological Survey in Woods Hole, Massachusetts, says that this model is a good first step in demonstrating the potential value of coastal habitats, but that it will undoubtedly require further refinements and more robust regional assessments. It can’t, however, identify where a restored wetland would be most viable. “One key thing missing, as mentioned in the paper, is that we just don’t have a good scientific understanding of how well coastal habitats will persist in the future,” he says.

The authors agree. According to Kareiva, two things are needed to turn this science into something that changes the way the world works: good-quality data on habitats and a rigorous way to cost-compare engineered and natural protections.

In the meantime, Nature Conservancy scientists are already using the models underlying this study to rebuild oyster reefs off the coast of Alabama—a project that has trapped sediment and dissipated wave energy that normally would have eroded the shore. “Until we started putting in these oyster reefs, I don’t think any of us fully appreciated the extent to which they would increase the shoreline,” Kareiva says.

The picture caption originally gave the wrong location of Galveston for the image. It is in Port Bolivar. This has now been corrected.