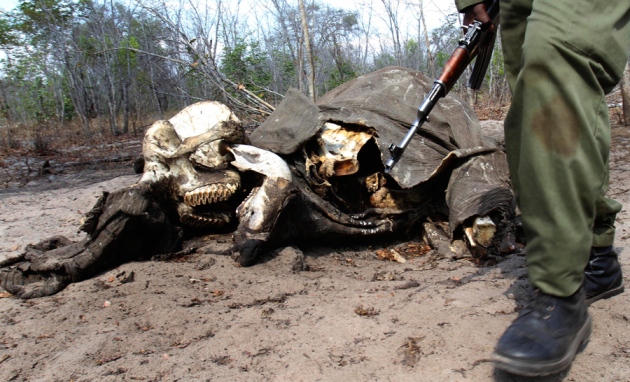 An elephant carcass in Zimbabwe, where poachers have used cyanide to kill the animals for their tusks.

It has been a bad year for Africa’s elephants. Thousands have been killed as poachers rush to cash in on soaring ivory prices, which have reached hundreds of dollars per kilogram. The cyanide poisoning of up to 300 animals at watering holes in a game park in Zimbabwe last month served as a particularly unpleasant reminder of the lengths to which poachers are willing to go.

Official numbers for elephant killings in 2013 are still being prepared, but researchers told Nature that it is likely to be a near-record year. Across the world, almost 30 tonnes of ivory have been seized, according to events detailed in news reports and collated by TRAFFIC, a non-governmental organization in Cambridge, UK, that monitors trade in wildlife. And figures for ivory hauls in media reports collected each month by conservation group Save the Elephants, headquartered in Nairobi, add up to a similar number (see go.nature.com/4xyeln). Both numbers, however, should be regarded with caution because the size of seizures can be overestimated, and many go unreported. With each tusk providing about 5 kg of ivory, and some researchers estimating that seizures account for as little as 10% of all ivory collected, the numbers paint a bleak picture.

“I certainly don’t think anything’s got better this year,” says Holly Dublin, chair of the elephant specialist group of the International Union for Conservation of Nature (IUCN).

Official numbers are available for 2011, when a record 46.5 tonnes of ivory was seized (see ‘Tusk totals’). Samuel Wasser, director of the Center for Conservation Biology at the University of Washington, Seattle, says that poaching levels were probably higher in 2012, and that 2013 could be higher again. He estimates that around 50,000 elephants were killed in 2011, given the amount of ivory seized, and that the numbers in the two years since were similar. Figures from TRAFFIC and Save the Elephants suggest that between 25,000 and 35,000 of the animals are killed each year. 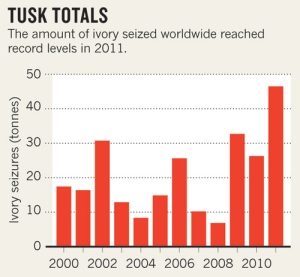 “Those numbers may be off by some margin. But based on the number of recent seizures, the elephants are being killed at their highest rate yet,” says Wasser, who estimates from news reports that 38 tonnes of ivory have been seized this year.

The past year has seen an escalation of political efforts to curb poaching, which is increasingly being linked to large criminal syndicates and even terrorist groups. The latest such effort takes place next week in Gaborone, Botswana, under the auspices of the IUCN. African heads of state, ministers and scientists will discuss measures to fight poaching including national task forces, tougher legal action against ivory traffickers and greater use of the military against heavily armed poachers.

“We’re seeing more political momentum build up,” says John Scanlon, secretary-general of the Geneva-based Convention on International Trade in Endangered Species of Wild Fauna and Flora (CITES). “That movement needs to be faster, but things are moving in the right direction.”

At a meeting in Bangkok in March, representatives from CITES signatory countries agreed to take steps to fight the poaching scourge. These include using public-awareness campaigns to curb demand for ivory and increased forensic tracing of seized ivory using genetic techniques. 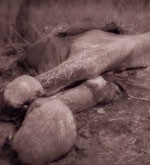 Some positive outcomes from the CITES meeting are already being seen on the ground, says Wasser, who uses DNA analysis of seized tusks to try to trace the origin of illegal ivory by matching genetic variations across Africa. The decisions at the meeting have made “a huge difference” to the willingness of countries to provide samples, he says. Using the samples, he expects to be able to pinpoint the major hotspots of poaching, eventually enabling intensive law enforcement in those regions.

Increased political attention may already be having an effect. Nations that drive the demand for ivory are stepping up prevention efforts. Scanlon says that China, for example, is now prosecuting more people for ivory offences than in the past. And the United States — which in a show of intent earlier this month publicly crushed 6 tonnes of ivory seized at its borders since 1989, when the international ban on ivory trading was introduced — has this year set up a task force to combat the illegal wildlife trade.

Closer to the front line, George Wittemyer of Colorado State University in Fort Collins, a conservation biologist who conducts research at the Samburu National Reserve in Kenya, says that the year started with the worst poaching levels ever seen there. But he adds that killings have fallen since, driven in part by efforts to engage the local community.

“I find it relieving to see the level at which the issue is being talked about,” Wittemyer says. “There are a lot of heads of state in Africa who are taking this seriously.”