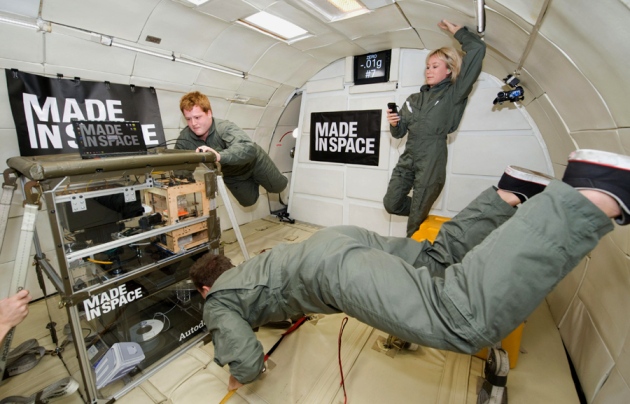 Engineers test a 3D printer under microgravity conditions aboard a modified aircraft in parabolic flight.

In one small step towards space manufacturing, NASA is sending a 3D printer to the International Space Station. Astronauts will be able to make plastic objects of almost any shape they like inside a box about the size of a microwave oven — enabling them to print new parts to replace broken ones, and perhaps even to invent useful tools.

The launch, slated for around 19 September, will be the first time that a 3D printer flies in space. The agency has already embraced ground-based 3D printing as a fast, cheap way to make spacecraft parts, including rocket engine components that are being tested for its next generation of heavy-lift launch vehicles. NASA hopes that the new capability will allow future explorers to make spacecraft parts literally on the fly.

Space experts say that the promise of 3D printing is real, but a long way from the hype that surrounds it. “There’s been a tendency among the space-enthusiast crowd to treat 3D printing as if it’s a magic technology — as if all you have to do is wave your wand, say ‘Abracadabra, here’s a 3D printer’, and it’s going to build you a Moon base,” says Dwayne Day, a senior programme officer at the National Research Council in Washington DC who oversaw a recent report on 3D printing in space (see go.nature.com/j6z5mq). In reality, Day says, the technique “is an important component of a much broader technology base that is being developed and advanced”.

The printer selected by NASA was built by the company Made In Space, which is based at a technology park next to NASA’s Ames Research Center in Moffett Field, California. During the printer’s sojourn on the space station, it will create objects from a heat-sensitive plastic that can be shaped when it reaches temperatures of about 225–250 °C. The team is keeping quiet about what type of object it plans to print first, but the general idea is to fashion tools for use aboard the station. “If you have 300 different things that could break on your spacecraft, you may not need to carry replacement parts for all 300 of them,” says Day.

The Made In Space printer is also a testbed for performance of the technology in near-zero gravity. The machines work by spraying individual layers of a material that build up to form a complete, 3D object. But in near-weightless environments, there is no gravitational pull to hold the material down.

In test flights aboard ‘vomit comet’ aircraft that fly in a parabola to create almost weightless conditions, Made In Space discovered that the layers of printed material varied substantially in thickness as the aeroplane cycled in and out of microgravity. By modifying the printer, the team got the layers to come out at roughly the same thickness.

Thermal issues could also be a problem. Heat flows differently in microgravity, which could mean that parts of the plastic become too hot or too cool for the printing to work properly. “Whether it works fantastically or we have some issues, we’re going to learn things that will play into the design of future machines,” says Michael Snyder, the company’s director of research and development.

Made In Space is looking at flying a second printer to the space station next year, incorporating design changes from what is learned during the first flight. To evaluate the printer’s performance, parts made aboard the space station this time will be flown back to Earth and tested to see whether they work as well as Earth-made materials do. There is little point in manufacturing parts in space if they do not work at least as well as spares that an astronaut might grab from a storage locker, Day notes. Time is also an issue: Made In Space’s prints typically take between 20 minutes and two hours, which might not be useful, depending on the urgency of the situation.

Back on Earth, NASA has already found ways in which 3D printing (also known as additive manufacturing) might save time and money. At NASA’s Marshall Space Flight Center in Huntsville, Alabama, engineers have been testing 3D-printed components for rocket engines that use liquid propellant. In one recent project, metal printouts of a rocket-engine injector cut at least 80% off the cost of the US$300,000 part. Another upcoming test will evaluate a 3D-printout of an even more complex piece of machinery: the fuel turbopump that serves as the heart of a rocket engine. “We’re looking to apply additive manufacturing where it makes sense,” says Nick Case, an engineer at Marshall.

And designers can use 3D printing to produce shapes that have never been seen before in spacecraft, says Slade Gardner, an engineer at Lockheed Martin Space Systems in Littleton, Colorado. “We have a long way to go, and we can’t do everything with 3D printing,” he says. “But the real, long-term goal is a design revolution.”