In space exploration, ambitious goals invariably demand time and money. NASA’s Discovery Program, which in the coming days will award US$425 million to one of three missions competing to send a probe to Mars, a comet or Saturn’s moon Titan (see ‘The final three’), is no exception.

The programme, though, has always aimed to deliver big science at relatively low cost, and its craft have explored almost every corner of the Solar System since the first probe launched in 1996. Discovery-class launches initially came every year or two — but now the tempo is slowing. The new mission will be the first to be chosen in five years, and there will be a similar wait for the next one.

Listen to Mars, splash down on Titan or hop on a comet 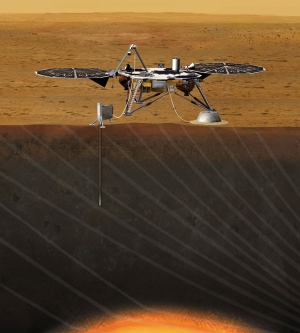 InSight is designed to map the structure of Mars.

INSIGHT
Bruce Banerdt wants to put an ear to the belly of Mars. A planetary scientist at NASA’s Jet Propulsion Laboratory in Pasadena, California, Banerdt is leading the proposal to launch InSight (Interior Exploration using Seismic Investigations, Geodesy and Heat Transport), which would map out the deep structure of Mars by listening to its faint visceral rumblings.

InSight would land in 2016, using the same spacecraft design as the 2007 Phoenix mission, which alighted near the martian north pole and proved that Mars landings are possible within a Discovery-sized budget. InSight’s destination would be Elysium Planitia, a large, relatively smooth area near the planet’s equator, with few hazards and plenty of sunlight for its solar panels, making a nuclear-powered energy source unnecessary. (NASA is keen to test-fly its new Advanced Stirling Radioisotope Generator — which can produce the same amount of power as previous radioisotope generators using less than one-quarter of the plutonium-238 — and the other two candidate missions both include one in their proposals.)

After landing, InSight would stick a seismometer firmly on the planet’s surface. Because Mars lacks the confounding noise generated by an ocean or a thick atmosphere (as on Earth), InSight should be sensitive to earthquakes as small as magnitude 3. It should even be able to detect the tremors associated with small asteroid impacts, and the tidal flexing caused by the moon Phobos passing overhead.

The signals should yield a better measurement of the depth of the crust — estimates currently range from 30 to 100 kilometres — which should help to explain how quickly Mars’ primordial ball of magma cooled. And by determining the size of the core and mantle, InSight could place constraints on the strength and duration of the planet’s magnetic dynamo, which shut down long ago, allowing the solar wind to erode the planet’s atmosphere.

Banerdt says that missions to Mars have mapped the surface in extraordinary detail, while gravity and radar measurements have offered a glimpse into the subsurface. But no mission has ever peered this deeply, he says. “We’ve really only scratched the surface.” 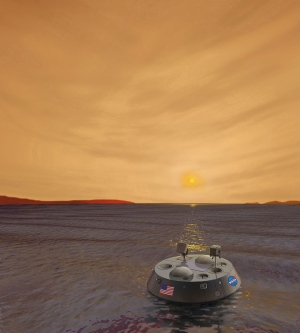 TiME would float on a hydrocarbon sea on Titan.

TiME
The parachute bursts open, slowing the capsule as it hurtles through thick clouds until it lands with a splash on a vast sea with gently lapping waves. The scene may sound familiar, but the location is alien: Titan, Saturn’s largest moon, which boasts methane clouds and hydrocarbon seas.

Of the three competing probes, the Titan Mare Explorer (TiME), has the farthest-flung destination — a 2016 launch would be followed by an almost 8-year journey. But with NASA’s flagship plans for the outer Solar System at a standstill (see Nature 471, 146–147; 2011), TiME’s principal investigator, Ellen Stofan of Proxemy Research in Laytonsville, Maryland, says that it is the only chance for a mission to the outer planets during the 2020s. And the project is not as risky as it sounds, she says. Titan’s thick atmosphere would ensure the capsule a leisurely, 1.5-hour descent — a much kinder ride than, for example, the minutes-long fall through the thin atmosphere of Mars. TiME’s target, a sea near Titan’s north pole called Ligeia Mare, is bigger than North America’s Lake Superior and at least 10 metres deep, offering a forgiving landing.

After arriving, the capsule would drift freely, watching the weather above and sipping the sea through a subsurface straw. NASA’s current mission to the Saturn system, Cassini, has already observed hydrocarbons such as methane and ethane on Titan, and delivered the Huygens probe to briefly study the surface. But a spectrometer on TiME will be able to study the hydrocarbon soup in detail, looking for signs of a complex prebiotic chemistry. TiME, Stofan says, will “test the limits of life in the Solar System”. 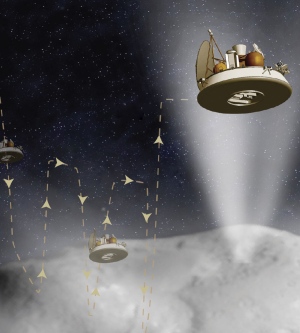 Chopper seeks to study a comet in depth.

CHOPPER
A decade or so ago, comets were thought to be relatively simple objects: dirty, loose-packed snowballs little changed since the early days of the Solar System. However, since then, a variety of missions have found them to be much more diverse, suggesting a more convoluted history. The surfaces of comets are marked by layered cliffs hundreds of metres tall, as well as circular features from which vaporized jets of carbon dioxide and water are thought to shoot out as a comet approaches the Sun and heats up. “Nobody expected them to be so complex,” says Jessica Sunshine, a planetary scientist at the University of Maryland in College Park, and principal investigator of the Comet Hopper (Chopper) mission proposal. “In many ways they’re much more diverse than asteroids.”

Most comet fly-by missions have spent just a few minutes up close to their quarry. By contrast, Sunshine’s mission would spend at least two years tagging along with its target, the 1.2-kilometre-wide 46P/Wirtanen. It would rendezvous with the comet in 2021 at roughly the distance of Jupiter’s orbit, then watch as it hurtled towards the Sun and the cold, quiescent ball of rock and ice began to generate an effervescent coma. Twelve times during the mission, the probe would gently alight on the comet and stick sensors into the friable surface to study what shapes comets today. Pinning down these physical and chemical processes could also reveal whether the variation between comets reflects conditions of the primordial outer Solar System, previously thought to be relatively uniform.

Because of the extremely weak gravity, Sunshine says, roving on a comet is impossible. “So we hop.” The team would largely avoid the potentially dangerous jets. But as a finale, after the 12th and final hop, the Comet Hopper would attempt to fly through a jet and measure its force. “We have to get into it and see how much it moves the spacecraft,” says Sunshine.

The growing lag — and the escalating costs and complexity that have caused it — is having a deleterious effect on the programme, some NASA observers say, because it creates an increasingly risk-averse approach to mission selection. “The real threat to Discovery is that it is slowing down,” says Alan Stern, a planetary scientist at Southwest Research Institute in Boulder, Colorado, and former associate administrator for science at NASA.

David Bearden, general manager for NASA programmes at the Aerospace Corporation of El Segundo, California, is not surprised by the trend (see ‘Mission creep’). Budget pressures have limited the frequency of larger, more expensive flagship missions such as the $2.5-billion Mars Science Laboratory, which is due to land on the red planet next month. So planetary scientists have looked to the regular Discovery launches to provide more of the data they crave, and pushed to add scientific instruments to the probes. The Near Earth Asteroid Rendezvous (NEAR), the first Discovery mission, sent five instruments on a relatively simple mission to the asteroid Eros. By contrast, MESSENGER, a 2004 mission to Mercury, had seven instruments and had to follow a complicated path to get to the planet. It ultimately ran 43% over its intended budget.

Stern says the lag in launches drives up not only the costs associated with technological complexity, but also the expense of management. Managers must keep engineering teams around for longer, and, with the stakes raised, end up spending extra money on tests and verifications. “When your launches are less frequent, each one matters more,” he says. “That becomes its own psychological driver for costs for project and programme managers.”

Complexity is relative to other Discovery missions and based on the Aerospace Corporation’s assessment of multiple design factors, including mass, power and instrumentation. Costs, including development and operation, adjusted to 2012 value.

All of this is why Gregg Vane, the programme manager for mission formulation at NASA’s Jet Propulsion Laboratory in Pasadena, California, says that Discovery has strayed from its original intended purpose, which was to be a riskier counterpoint to the too-big-to-fail flagships. Failure is no longer an option for a Discovery mission either, he says. “The tolerance for risk is significantly lower than it has been in the past.”

However, Jim Green, director of NASA’s planetary-science division, flatly denies this charge. “What is it about those [missions] that you think is averting risk?” he asked. “You can’t tell me that the missions we’ve executed in Discovery are not pushing the envelope.”

Nevertheless, avoiding risk was key when Vane and his colleagues prepared their plans for the proposed Mars mission, InSight, which would put just two instruments on a spacecraft design that has been used successfully in a previous Mars mission. Caution, he believes, will also be uppermost in the minds of the review-committee members. “It’s all about risk,” he says. “Period.”