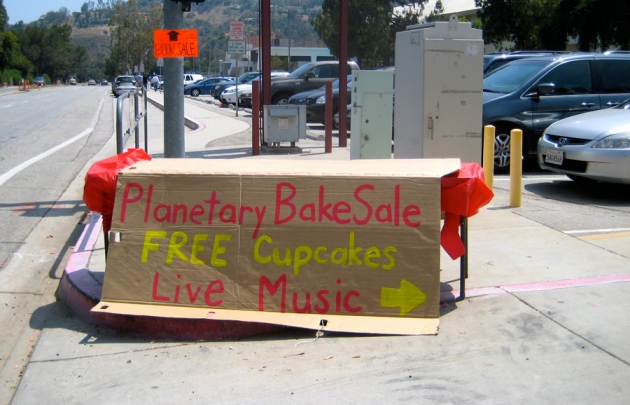 The cupcake giveaway raised awareness among visitors to the open house at NASA's Jet Propulsion Laboratory in Pasadena, California.

It has come to this: planetary scientists across the United States hawked baked goods to the public on Saturday in an effort to drum up awareness of their field’s dwindling financial support. They were protesting plans in US President Barack Obama's 2013 budget request to cut 21% from NASA's planetary-science budget, and 38% from its Mars projects.

“The planetary programme is one of the shining examples of NASA at its best,” says Alan Stern, vice-president of research and development in the space science and engineering division at the Southwest Research Institute in Boulder, Colorado, who coordinated the nationwide Planetary Exploration Car Wash and Bake Sale. “We’re not asking for a raise, but we sure would prefer not to have such a steep cut.”

One site where scientists are becoming agitated is NASA’s Jet Propulsion Laboratory (JPL) in Pasadena, California, where many Mars missions are built and managed. As the lab held its annual open house on Saturday, planetary scientists from the California Institute of Technology (Caltech) in Pasadena and the University of California, Los Angeles enticed visiting space fans to stop outside the entrance for cupcakes and learn about the budget plight.

At times, crowds were small, but the event hosted a steady flow of traffic, said organizer Jennifer Buz, a Caltech seismologist. In addition to sampling cupcakes in flavours such as 'red planet' and 'white dwarf', visitors tapped their toes to live music and entered a raffle to win bits of meteorite. Children trundled around in a pedal car made up to look like a Mars rover.

The planetary scientists weren't hoping to fill their coffers with the revenue from the sale; instead, they offered free sweets in return for signatures on letters beseeching Congress to reverse the cuts. The Pasadena group estimated that it collected hundreds of names.

Elsewhere, planetary scientists showed that they would do anything to raise awareness. In Boulder, they polished shoes. In Houston, Texas, scientists from the Lunar and Planetary Institute joined forces with the dark side, colluding with costumed Star Wars stormtroopers to attract supporters. 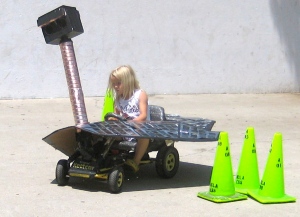 As in the lab, “young people do the grunt work for these things”, notes Matt Siegler, a postdoc studying lunar ice at the JPL. Students and recent PhDs hear 'budget cuts', and foresee their careers fizzling like a failed rocket launch. "Am I going to have to leave the field because of this?" Siegler wonders.

According to Obama’s budget, which is currently under discussion in Congress, planetary research would suffer the greatest blow to any science programme in 2013. But not all parts of the space agency are hurting. The James Webb Space Telescope, set to launch in 2018 but suffering from delays and budget overruns, is gobbling up funds with a 21% increase. And the White House requested that the budget to support commercial space flight be more than doubled.

“I do feel like planetary science is getting picked on,” says Buz. “It’s just looking grimmer and grimmer.”

Researchers fear a future on the unemployment line, with the United States forsaking its lead in the space race and children, with no cool space discoveries to inspire them, losing enthusiasm for science.

And should the nation later decide to get back into planetary studies, it may find that researchers have left the field or moved to countries with ongoing support for their work. “It’ll be too late,” said Kim Lichtenberg, who works on mission operations for the Mars Curiosity rover at the JPL. “There isn’t going to be anything to inspire the next generation. We won’t have people who are trained any more.”