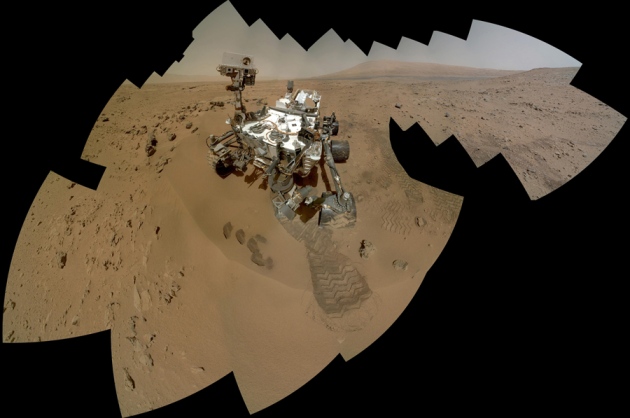 A composite self-portrait of the Curiosity rover, which has been exploring the Red Planet's surface since August, 2012.

NASA’s flagship Mars rover, the six-wheeled Curiosity, is a geochemistry laboratory in a robot. Nature looks at a suite of discoveries, reported on 27 September in Science, about the rocks and soils that Curiosity explored in the red planet's Gale crater last year.

How is Curiosity studying the Martian surface?

Like a Swiss army knife, the rover can deploy multiple tools. It can use its arm to collect rocks or soil and dump them into a sample processor, then heat them up and sniff the gases being released to decipher their chemical compositions. It can zap samples with X-rays and watch how the light is diffracted — a technique that reveals which minerals are present. And it can blast distant rocks with a laser, vaporizing them and probing their chemical and physical make-up.

What findings are being reported?

Jake Matijevic is a pyramid-shaped igneous rock, the composition of which turns out to resemble a rare type of oceanic rock on Earth called mugearite1. It probably formed from magma more alkaline than that from which most other known Martian rocks were formed. The rock seems to be chemically fractionated, meaning that it might have solidified slowly enough for crystals to separate out and change the magma before it erupted onto the surface1. 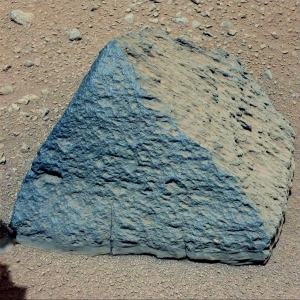 Rocknest, a windblown pile of soil, sand and dust, looks a lot like dirt found at other Mars sites by NASA's earlier rovers Spirit and Opportunity2. More than half of the soil at Rocknest is made of ground-up igneous rocks that are common on Mars, and resemble those found at Earth volcanoes such as Mauna Kea in Hawaii3. Martian winds may have spread the material over great distances during powerful storms.

What else has the rover found?

After Curiosity left Rocknest, it rolled to an area named Yellowknife Bay and snuggled up next to a rock dubbed John Klein. Drilling into that rock revealed evidence for a watery environment with a neutral pH — perhaps the most habitable place found on Mars so far.

So is there water on Mars, or what?

Yes. Curiosity showed that Rocknest soils contain about 2% water by weight4. This discovery adds to the evidence from riverbeds, gullies and other landforms that could have been sculpted by water, as well as results from chemical tests that show that some Martian minerals probably formed in the presence of water. In fact, Curiosity liberated water from Rocknest dirt by heating it, which suggests that future explorers might be able to extract small amounts of water, carbon dioxide or other supplies on Mars.

What about organic compounds?

When Curiosity heated Rocknest soil, it detected some chlorinated hydrocarbons, project scientists report in the Journal of Geophysical Research: Planets5. Those, however, might have come from a soil compound called perchlorate decomposing and reacting with carbon that the rover carried with it.

What’s next for Curiosity?

The rover's ultimate goal is to reach a mountain dubbed Mount Sharp, which is thought to be made up of rock layers laid down by flowing water. Curiosity left Yellowknife Bay in July and has travelled about one-fifth of 8.6 kilometres to the base of the mountain.