Mercury is a planet of many superlatives: the fastest, smallest, nearly the hottest and almost the most dense. It might also be the oddest.

Scientists collating data from the MESSENGER probe, a NASA mission that has just completed one year in orbit around Mercury, today revealed their depiction of the strange internal structure that they think lies beneath the planet’s cracked terrain. The proposal — that a thin, solid shell of iron sulphide envelops the outer liquid core — would help to explain the planet’s gravity field, but it presents problems in explaining Mercury’s relatively recent geological upheavals. 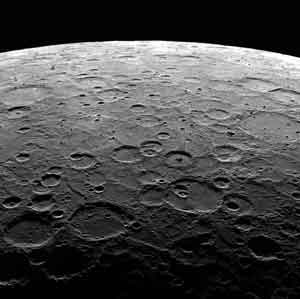 “It seems that Mercury has a novel internal structure,” says Steven Hauck, a planetary scientist on the team at Case Western Reserve University in Cleveland, Ohio.

The researchers presented their findings this week at the Lunar and Planetary Science Conference in the Woodlands, Texas, and also published two papers1, 2 in Science on 21 March.

One paper1 focuses on the high-resolution topographical map created by the orbiter’s laser altimeter. Like all rocky planets, Mercury is pocked with deep, ancient impact basins. But the basins have been disturbed since then: basin floors have been tilted or uplifted, a sign that volcanic and tectonic activity persisted well past Mercury’s first several hundred million years. “This points to the fact that Mercury had an active middle age,” says Maria Zuber, a science team member at the Massachusetts Institute of Technology in Cambridge.

The second paper2 describes a new gravity model for the planet, constructed by measuring tiny changes in MESSENGER’s orbit using NASA’s Deep Space Network. The model, when combined with topography data and measurements of the planet’s spin, suggests that as much as 85% of Mercury’s radius is taken up by its dense iron core — an upward revision. “We knew Mercury had a large core,” says Zuber. “Now we think it’s even larger.”

The team further suggests that the liquid or partially liquid iron core is encased in a relatively thin shell of iron sulphide. This satisfies the gravitational data and would account for why the planet's crust is enriched in sulphur and depleted in iron, but it also makes it more difficult for much convection to occur within the thin mantle that sits atop the shell. This presents problems for those that invoke convection as a driver of the observed tectonic and volcanic features at the surface. “There isn’t a whole lot of mantle to be doing this lifting up,” says Zuber.

The team also announced details of an additional year of extended mission operations. Next month, MESSENGER's 12-hour elliptical orbit will be shrunk slightly to an 8-hour orbit, giving the team many more close passes of the surface.