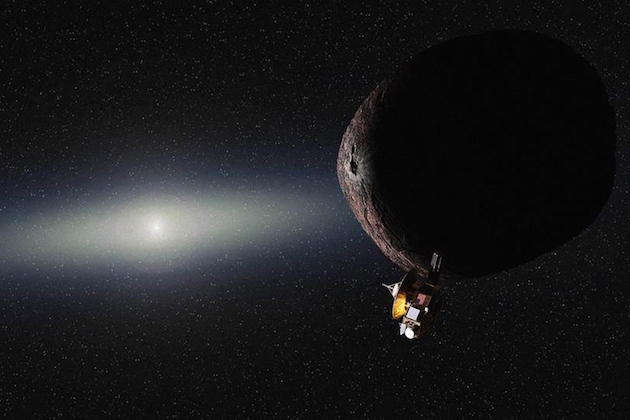 On New Year’s Day 2019, NASA’s New Horizons mission plans to dive-bomb an icy world known as 2014 MU69. It will become the second object, after Pluto, visited by the spacecraft.

NASA announced the selection on 28 August. Practical considerations dominated the decision: 2014 MU69 beat another object for the honour of a close-up visit because New Horizons will burn less fuel to get there.

Mission controllers will ignite the spacecraft’s engines in a series of burns starting in late October to set it on course for 2014 MU69. The trajectory change will use up about 12 kilograms of the 35 kilograms of fuel still on board.

When New Horizons arrives, it will zip no more than 12,000 kilometres above the object’s surface. That’s about the same distance the spacecraft whizzed past Pluto in its historic 14 July encounter.

“We’d like to go closer, but we don’t know if we can,” says team member John Spencer, a planetary scientist at the Southwest Research Institute in Boulder, Colorado. How high the spacecraft flies above the surface depends on how quickly mission controllers can rotate the cameras and keep the images from smearing out.

Team scientists discovered 2014 MU69 while using the Hubble Space Telescope to scout potential post-Pluto destinations for New Horizons. The object belongs to the 'cold classical' group of Kuiper belt objects (KBOs), the icy worlds that orbit the Sun beyond Neptune.

Cold classical KBOs are thought to be leftovers of a primordial population from the early days of the Solar System. Unlike Pluto, which swings on a wildly stretched-out orbit, their paths seem relatively unperturbed by giant planets in the outer Solar System.

For now, not much else is known about 2014 MU69 other than its size: about 45 kilometres across.

Before and after the 2014 MU69 encounter, New Horizons will be able to photograph about a dozen other KBOs from afar, Spencer says. That is not enough to see their surfaces in any detail, but it will allow team scientists to discover whether any of those are binary KBOs — two objects whirling around a mutual centre of gravity, like Pluto and its largest moon Charon — and to begin a census of the general brightness of KBOs.

The closest New Horizons will come to one of those other, more distant KBOs is about 15 million kilometres, or one-tenth of the Earth–Sun distance. “That’s going to be huge,” Spencer says. “Even with our small telescope we’re going to have higher-resolution images than possible with Hubble.”