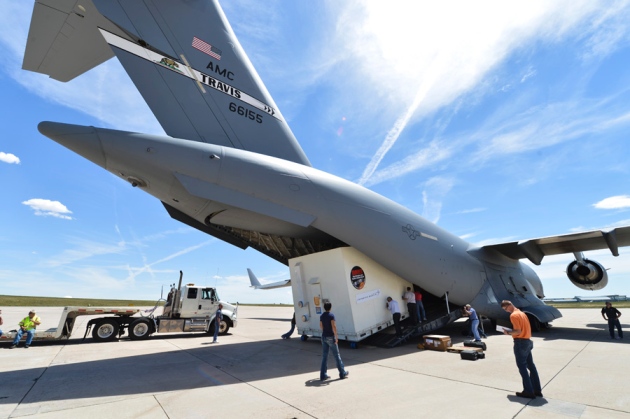 The MAVEN spacecraft, which arrived at Cape Canaveral, Florida, in August, is being prepared for a November launch.

All it took was four minutes. That is how long it took to put the Lunar Atmosphere and Dust Environment Explorer (LADEE) into orbit around the Moon on 6 October. Those four minutes were run from mission control at the Ames Research Center in Moffett Field, California. But Ames, like the rest of NASA, is technically closed because of the US government shutdown on 1 October.

Fortunately LADEE, which launched 6 September, is an active mission and thus exempt from federal closure. Similarly, the Juno spacecraft, which has been on its way to Jupiter since August 2011, will zip past Earth on 9 October for a long-scheduled gravity assist to accelerate its journey. “The spacecraft is going to fly by whether Congress agrees to work together or not,” says Scott Bolton, Juno’s principal investigator and a planetary scientist at the Southwest Research Institute in San Antonio, Texas.

LADEE and Juno are some of the lucky ones. Many of NASA’s other missions are facing delays or outright cancellations. For instance, the Stratospheric Observatory for Infrared Astronomy, a Boeing 747 airplane with a hole cut in its side to accommodate a 2.7-metre telescope, was on a research flight when the shutdown began. It is now indefinitely grounded at its home base at NASA's Dryden Flight Research Center in Palmdale, California.

Some spacecraft are gathering cobwebs at the Goddard Space Flight Center in Greenbelt, Maryland. Work on the James Webb Space Telescope (JWST) has stopped, although Goddard engineers had already loaded two instruments for integrating and testing in a refrigerated room simulating deep-space environments. The tests aren’t happening, and NASA continues to truck in liquid nitrogen to keep the components cold, says Matt Mountain, director of the Space Telescope Science Institute in Baltimore, Maryland. “JWST is essentially slipping one day for every day of the shutdown,” he says. The telescope, which is slated to launch in 2018, has several months of contingency delays built into its schedule.

Also languishing at Goddard is the US–Japanese Global Precipitation Measurement mission, which had been going through final checks before being shipped to Japan next month for a February launch. It was powered down and put into 'safe mode' with protective covers, says Art Azarbarzin, the mission's project manager at Goddard.

At Kennedy Space Center in Cape Canaveral, Florida, the news is slightly better. Three days after the government shutdown, NASA resumed work on the Mars Atmosphere and Volatile Evolution (MAVEN) mission. It is undergoing final tests in preparation for an 18 November launch.

The reprieve comes in large part because MAVEN is NASA’s main long-term option for relaying communications from the Martian surface to Earth. Curiosity and Opportunity — the agency’s two Mars rovers, which are operating normally because they are active missions — send data through two ageing orbiters, one launched in 2001 and the other in 2005. If those break down, MAVEN will be the primary US communications relay in Mars orbit. It can launch as late as 15 December and still carry out its mission to study the Martian atmosphere, says Bruce Jakosky, MAVEN's principal investigator and a planetary scientist at the University of Colorado Boulder.

Because many NASA contracts are awarded in lump sums, astronomical research organizations are working to stretch their funding until their contracts end. That applies to the agency’s ‘Great Observatories’ such as the Chandra X-ray satellite, which has money to operate until mid-December, and the Hubble Space Telescope, which will run through at least the end of October. But that schedule could change if something goes wrong. If Hubble experiences any kind of anomaly, it will go into 'safe mode' until employees return to work at Goddard to fix it, says Mountain.

Contracting arrangements also mean that several key NASA centres continue to run under the auspices of university operators. The Jet Propulsion Laboratory in Pasadena, California, for example, is run by the California Institute of Technology, and the Applied Physics Laboratory in Laurel, Maryland, is part of the Johns Hopkins University.

Meanwhile, NASA is still watching the skies for dangerous near-Earth asteroids — for now. Its near-Earth-object search programmes, partially funded by other institutions such as the US Air Force, have enough money to keep operating in the short term, says Timothy Spahr, director of the Minor Planet Center in Cambridge, Massachusetts. But “if it drags,” he says, “some of us will run out of our annual money.”