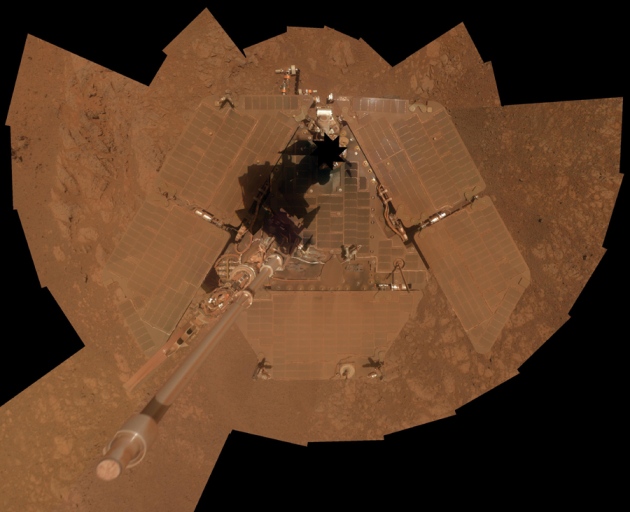 After spending 10 years and driving almost 39 kilometres on Mars, is there anything left for NASA’s Opportunity rover to do?

Mission scientists think so. They say that Opportunity is on the verge of making some of its biggest discoveries yet. Just 3 kilometres south of the rover’s current position, satellites have spied a lode of water-bearing clay minerals — a potentially habitable environment from a time when Mars was warmer and wetter than it is today. Matthew Golombek, Opportunity’s project scientist at the Jet Propulsion Laboratory (JPL) in Pasadena, California, says that the rover is on the verge of hitting the “jackpot”.

But, like six other ongoing NASA missions studying the Moon, Mars and Saturn (see ‘Fighting for life’), Opportunity’s money is due to run out at the end of the US fiscal year, on 30 September. Managers for each mission are trying to convince the agency to cough up continued funding, and their arguments are due on 11 April. A ‘senior review’ panel of external planetary scientists will rank the proposals’ potential science return, and submit their suggestions to NASA headquarters for a final decision.

Similar reviews take place every couple of years, but the upcoming one is especially fraught. NASA will almost certainly continue to fund its flagship rover, Curiosity, which landed on Mars less than two years ago. That leaves the older missions to battle it out for the rest of a limited pot of money. 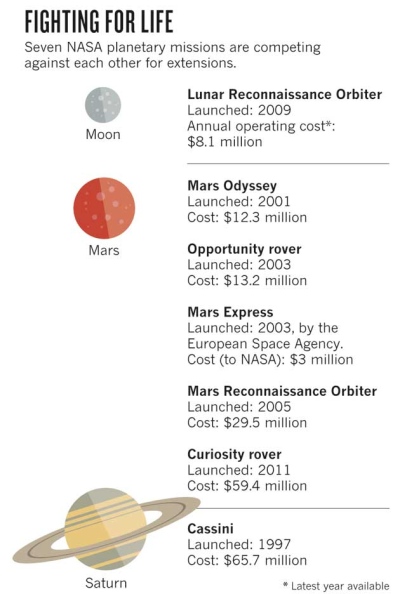 Jim Green, who heads NASA’s US$1.3-billion planetary-science division, says that the agency is working to find money for all of its operating spacecraft, and wants to dispel the idea that missions are battling to the death. “We’ll go through the senior review, order missions and fund them,” he told attendees at the Lunar and Planetary Science Conference last week in The Woodlands, Texas.

But hard choices often have to be made, says Nadine Barlow, a Mars researcher at Northern Arizona University in Flagstaff who served on the 2012 senior review panel. “You always have to keep in the back of your mind that this could be the end of the mission,” she says.

For this year’s senior review, Green asked project scientists to take a slightly different approach from before. Each mission is to outline scenarios for three different price tags: an ordinary operating plan; a larger budget that could cover extra science targets; and a financial floor beneath which little science can realistically be done.

Above all, each mission needs to show what fresh science it has to offer. That can be challenging when a spacecraft has already been exploring for years.

One approach is to argue for studying planetary change over time. The Lunar Reconnaissance Orbiter (LRO) has been snapping high-resolution pictures of the Moon since 2009, providing a long time series for studying surface changes. At the planetary conference, Mark Robinson of Arizona State University in Tempe showed off dramatic pictures of high-speed meteorite impacts on the Moon. On 17 March 2013, for instance, automated cameras on Earth captured the brightest flash ever detected from one of these impacts. Soon after, the LRO photographed the resulting crater.

The spacecraft has found many more examples of fresh impacts. Surprisingly, the craters show debris spread over greater distances than might be expected. That observation could be important for future lunar exploration: astronauts might find themselves sprayed by rocks from far-flung impacts.

“You always have to keep in mind that this could be the end of the mission.”

The Cassini mission to Saturn also wants to examine temporal changes — in its case, the shifting seasons. Cassini arrived in 2004, just as Saturn’s northern hemisphere was beginning to emerge from winter. “We’re coming onto northern summer now, and we’re excited about the Sun climbing to the highest extent that we’ve seen,” says project scientist Linda Spilker of JPL.

That new Sun angle will give Cassini fresh views of Saturn’s rings and of the giant hexagonal jet stream around the planet’s north pole. On the planet’s largest moon, Titan, which harbours northern polar seas made of methane and other hydrocarbons, the oncoming summer may change wind patterns and ruffle the oceans’ surfaces. Researchers studying the moon last week reported that they may have spotted the first waves outside Earth (see Nature http://doi.org/r27; 2014); these episodes could occur more frequently as summer approaches. Three close flybys of another of Saturn’s moons, Enceladus, are also planned for Cassini, to sample the geyser-like plumes of water vapour that spray out of fractures near its south pole.

Smaller missions are also angling for a piece of the division’s pie. Those running the Mars Odyssey spacecraft, which was launched in 2001 and is the longest-lived Martian spacecraft ever, are moving the craft into a different orbit. That would allow it to look at the red planet from dusk and dawn angles that have not been tried since the 1970s. The Odyssey team is also trying to play up the fact that the orbiter is an essential communications tool: it is in a favourable orbit for relaying information from rovers on the Martian surface to Earth. The newer Mars Reconnaissance Orbiter also acts as a relay, but that mission has suffered several glitches in recent years.

For now, all the planetary missions under review are running as planned until the end of this fiscal year. Members of the review panel should be named shortly, and are due to meet in May and report their recommendations to Green, for his decision in June.

Stephen Mackwell, head of the Lunar and Planetary Institute in Houston, Texas, thinks that NASA officials will find a way to keep most of the missions going, especially if the project teams can show a way to take the science in a new direction. “Business as usual is not a sustainable approach,” he says.