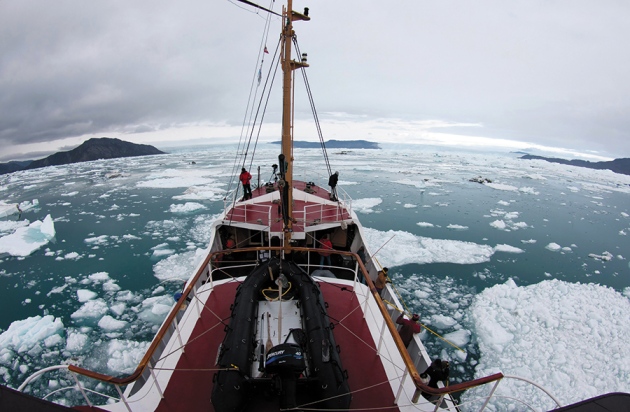 The MV Cape Race is using sonar to map the depth of water around Greenland’s west coast.

When the retired fishing trawler MV Cape Race sets off along Greenland’s west coast this week, it will start hauling in a scientific catch that promises to improve projections of how the ice-covered island will fare in a warming world. The ship’s cruise is the initial phase of a six-year air and sea campaign to probe interactions between Greenland’s glaciers and the deep, narrow fjords where they come to an end.

Called Oceans Melting Greenland (OMG), the US$30-million NASA project will help scientists to predict the future of the Greenland ice sheet, which holds enough water to boost sea levels by around 6 metres and already seems to be melting more rapidly in response to increasing air temperatures. But it is not clear how much the oceans affect the rate of melting along the island’s edges, which depends on poorly known variables such as how warm, saline water interacts with the glaciers.

“It should be a powerful constraint on our knowledge and ability to model ice loss there,” says principal investigator Joshua Willis, an oceanographer at NASA’s Jet Propulsion Laboratory in Pasadena, California.

When simulating glacier dynamics, current global climate models consider only ice’s interactions with the atmosphere, says William Lipscomb, an ice modeller at Los Alamos National Laboratory in New Mexico. He is working to incorporate ice–ocean inter­actions around Antarctica into a climate model being developed by the US Department of Energy. But in Greenland, the intricately carved coastline makes this much more difficult. The department plans to give researchers at the Naval Postgraduate School in Monterey, California, $466,000 over 2 years to build a detailed model that will link the land ice and oceans around Greenland. OMG data will help to validate that model, says project leader Frank Giraldo.

Work by OMG participant Eric Rignot, a glaciologist at the University of California, Irvine, underscores the importance of detailed data (E. Rignot et al. Geophys. Res. Lett. http://doi.org/6dn; 2015). Using sonar data from one part of western Greenland, Rignot’s team found that existing maps underestimate the depth of three fjords by several hundred metres. It also found that glaciers flowing into all three fjords extended deeper than was thought, far enough below fresh surface waters to reach a warm, salty layer flowing up from the Atlantic Ocean that could accelerate melting and contribute more to sea-level rise than had been believed.

“With OMG, we are going to reveal the depth of these fjords,” says Rignot.

The programme will also provide valuable information on the physical characteristics of glacier ice. Last December, geophysicist Beata Csatho of the University at Buffalo in New York and her colleagues reported using surface-elevation data to estimate how much ice mass Greenland had lost between 1993 and 2012 (B. M. Csatho et al. Proc. Natl Acad. Sci. USA 111, 18478–18483; 2014). The data were fairly reliable over the island’s interior, Csatho says, but measurements were more difficult along its edges, where the ice tends to be warmer, thicker and full of crevices. “It’s still a challenge to get the mass of these glaciers,” she says.

When the aerial phase of OMG begins next year, planes will fly inland from the coast, taking measurements of slight changes in gravitational pull that can be used to produce low-resolution maps of the topography under both water and ice. Planes will also drop more than 200 temperature and salinity probes into fjords and coastal waters, and take radar measurements along the coast to track large-scale ice loss over five years. Analysing that ice loss in light of the new topographical and oceanographic data will help researchers to determine where, and to what extent, deeper saltwater currents affect glaciers.

Lipscomb says that all these OMG data should help modellers as they incorporate ocean–ice interactions around Greenland into their models. That work is still in its early stages, he says, “but the data that they are getting in this project is exactly what we need”.