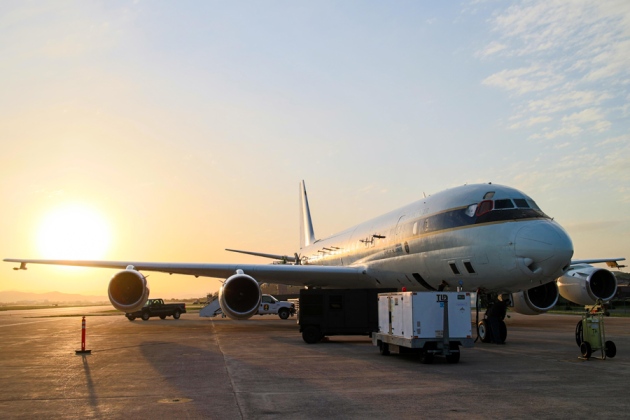 NASA’s DC-8 research jet sits on the tarmac at Osan Air Base in Korea.

The turbulence on this flight is intense. To take a picture I’m forced to crawl to the window, alternately wobbling on my knees and pinned to the floor in between millions of dollars of scientific kit.

But the view is worth it — I’ve never seen Seoul like this. Just 300 metres above the Han River, we are headed straight over Gangnam, one of Seoul’s busiest areas, participating in one of the most comprehensive air-quality studies ever attempted.

This bumpy ride means that our NASA research aeroplane has descended into the boundary layer, the lowest part of the atmosphere where heat and friction from the ground affects the wind, and cause the air to swirl. And that means the plane is now sampling pollution from the ground that has been carried up into the air.

The readings it takes could help to bring some clarity to a long-standing source of tension with China — understanding how much pollution and dust drifts over from that country, and how much is home-grown in South Korea.

In the spring, westerly winds from China drift over the peninsula, carrying not only pollution but also hazardous yellow dust kicked up from the deserts of Mongolia and Northern China. These dust particles are small enough to get into lungs and cause respiratory illnesses. Data from the state-run Korea Environment Corporation showed that in April, levels of PM10—a measure of small dust particles—in downtown Seoul exceeded safe levels of 80 micrograms (μg) per cubic metre on 20 days, peaking at more than 400 μg per cubic metre on 24 April.

A 2011 study commissioned by the city of Seoul concluded the problem comes roughly equally from local sources and countries upwind of South Korea, notably China. In Korea, many single out the contribution of Chinese industry, but environmental group Greenpeace has claimed that as much as 70% of some types of pollution originate locally. The NGO says South Korea’s government has in the past focused on China’s contribution to shift the blame from its own failing to tackle home-grown pollution sources.

Some in South Korea are also growing frustrated with the unreliability of national forecasts of particulate matter. Current forecasts are accurate only 60% of the time, You-Deog Hong of South Korea’s National Institute of Environmental Research (NIER) in Incheon said at a 29 April press briefing at the US air base near Osan where the NASA plane is based for this project.

South Korea makes for a “natural air quality laboratory”, says James Crawford of NASA's Langley Research Center in Hampton, Virginia, who is the US lead scientist on the international Korean air-quality study, known as KORUS-AQ. The Yellow Sea between China and the Korean peninsula acts as a natural divider, allowing scientists to measure China’s contribution over the water before it mixes with South Korea’s air. All told, KORUS-AQ involves more than 580 researchers from 72 institutions, three planes, two ships and 300 ground-based monitoring sites.

The DC-8 research plane NASA is operating is cleared to fly at low altitudes across the peninsula — both in rural areas and through the urban heart of Seoul, which is crucial to understanding how urban emissions and emissions from plants and agriculture mix.

“This way of flying is entirely new to the way this field works,” says Crawford. He has previously led the DC-8 on studies based in Asia, but those were only cleared to operate over the Pacific. “You couldn't go to the source; you couldn't measure directly.” 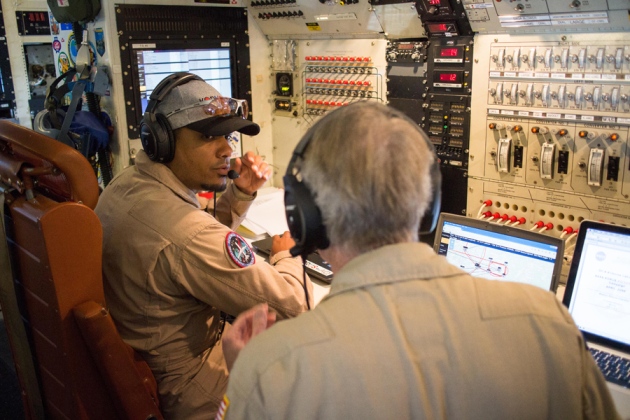 On a typical flight, the NASA plane will fly up and down the length of the Yellow Sea at varying altitudes, sampling the air with 25 instruments operated by dozens of scientists on board — then repeat the run over the Korean peninsula, flying as low as 300 metres.

The scale of the project dwarfs all previous, similar air-quality studies in South Korea, says Jeong-Hoo Park of the NIER. The last one, 14 years ago, involved “just three ground sites and one small airplane”, he says.

The new data will significantly improve understanding of atmospheric chemistry, particularly how gas-phase pollutants interact with particulate matter — the biggest weakness in these forecasts, says Lee Tae Sik, an atmospheric chemist at the Korea Polar Research Institute in Incheon.

"Nowadays the weather forecasting is quite good, which means we understand more or less the physics, the meteorology,” Sik says. "But still we need some knowledge about the chemistry, especially between the solid phase and the gas state."

It could lay some groundwork for South Korean negotiations with China about the pollution issue, says Sik. “If this kind of collaboration project gives us some result, then China will pay attention.”

Dust in the wind

After passing over Seoul, the 4 May flight I’m on heads for the Yellow Sea. Near the southwest coast of Korea, we start descending to the surface, buzzing Chinese fishing boats every few minutes.

Back in the cabin, spiking instrument readings indicate that we’re flying through plumes of Chinese pollution. The researchers consult with each other, debating which altitude to take for the next pass. 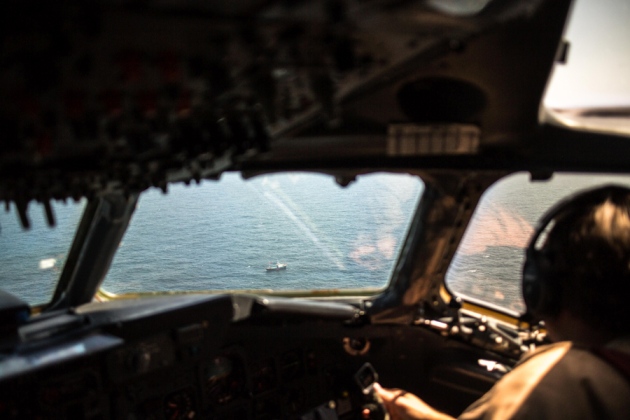