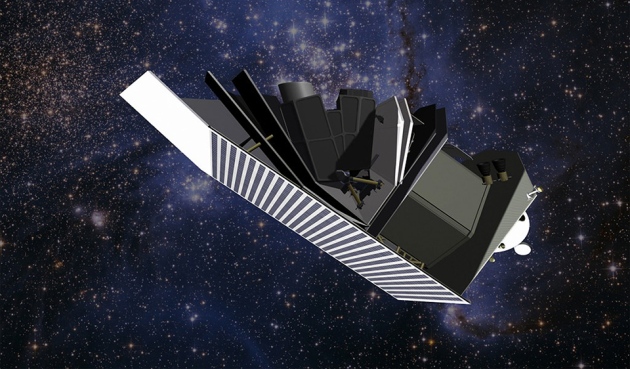 The Sentinel space telescope (artist's impression), in development by a private foundation, has lost NASA's support.

Update, 30 September 2015: NASA has chosen to fund the NEOCam asteroid-hunting proposal for possible launch in 2021.

NASA has cut ties with a private group that intends to launch an asteroid-survey mission. The decision clouds the prospects of the Sentinel satellite, currently the only large-scale space telescope being developed to seek space objects that have the potential to wreak havoc on Earth.

NASA said on 29 September that it has ended its commitment to provide analytical and data-downlink support to Sentinel, a US$450-million satellite designed to spot 90% of near-Earth objects (NEOs) larger than 140 metres. NASA said that they made the decision because the project has missed its development deadlines, and the money held in reserve for Sentinel operations is needed elsewhere.

The Sentinel team has vowed to continue, but it is unclear whether the project can overcome perennial cash-flow problems and NASA’s vote of no confidence. Money for the spacecraft’s development was supposed to come from private donors, but fundraising has lagged behind expectations.

Sentinel’s struggles are “disappointing,” says Timothy Spahr, chief executive of space consultancy NEO Sciences. If the mission ever launches, it has the potential to make a big dent in the estimated 500,000 undetected and potentially devastating asteroids that come within 45 million kilometres of Earth’s orbit. An object around 55 metres across ravaged trees across 2,000 square kilometres of Siberian forest in the Tunguska event of 1908; a direct hit from a Tunguska-sized asteroid could lay waste to a large city. Of the estimated 363,000 near-Earth asteroids as big as the Tunguska object, only 565 had been discovered as of a year ago.

A steady flow of scientific reports has urged the launch of a space-based telescope dedicated to finding these objects. In 2005, the US Congress passed a law requiring NASA to track down 90% of all objects 140 metres and bigger by 2020. The space agency’s NEO budget rose from about $4 million in 2009 to $40 million in 2014, but NASA continues to rely mainly on a patchwork of ground-based telescopes for NEO surveillance and expects to miss its deadline.

Hoping to make progress on that goal, NASA signed a 2012 agreement with the B612 Foundation, a non-profit group in Mill Valley, California, led by former astronaut Ed Lu. NASA agreed to provide assistance worth roughly US$30 million if B612 met a number of development milestones. But the group has missed its technical deadlines and raised only $1.6 million in 2013, the most recent year for which figures are available. The foundation needs roughly $30 million to 40 million annually to keep Sentinel on track.

NASA notified B612 in August that it was dissolving their agreement. The end of the deal, first reported by SpacePolicyOnline.com, “in no way changes the resolve of the B612 Foundation to move forward”, Lu says in a statement. But it may sway the chances of a different survey effort: NEOCam, an asteroid-spotting mission now under consideration by NASA. The NEOCam team, headed by astronomer Amy Mainzer of the Jet Propulsion Laboratory in Pasadena, California, expects to learn in the next few weeks whether it has made the first cut for funding from NASA’s Discovery programme, which supports relatively modest space missions. If NEOCam is selected, it will compete with a small number of other projects for a 2021 launch slot.

“I have nothing but admiration for the hearts and dedication of the Sentinel team,” says planetary scientist Richard Binzel of the Massachusetts Institute of Technology in Cambridge. “But this is such a large problem to tackle that it is going to require a dedicated space-agency effort.”

Some scientists think that without Sentinel as a distraction, NASA is more likely to fund a dedicated NEO telescope. “The promise of something for free was impeding NASA from making what was seen as a critical investment,” says NEOCam team member Mark Sykes of the Planetary Science Institute in Tucson, Arizona.

Sentinel is not the first ambitious NEO-spotting project to fall by the wayside, Spahr notes. “There’s a long history of things that didn’t work. But failure drives things forward.”