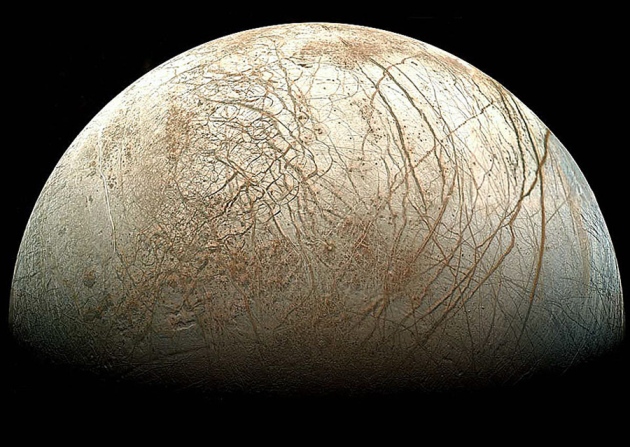 The recent discovery of geysers on Europa — photographed here by the Galileo probe during its mission from 1995 to 2003 — has rekindled interest in this icy moon of Jupiter.

The more we learn about Europa, the greater its allure. Galileo Galilei discovered Jupiter’s four largest moons in 1610, and in the intervening centuries Europa, the smallest of them, has revealed itself as a likely harbor for liquid water — and maybe even life. Last week NASA took tentative steps toward sending a robotic mission there — a goal long lauded by planetary scientists. But exploring Europa presents some serious technological, financial and political challenges.

For the last few year's NASA's planetary-science budget has seen a major crunch, and the lion's share of its remaining funds have gone to Mars missions. Despite the high priority given to Europa exploration in the US National Research Council’s last decadal survey, an overview of the most pressing goals in planetary science, NASA has not requested any money for planning a Europa mission in recent years. Nevertheless, Europa fans in Congress have allocated funding for it, granting $43 million in 2013 and $80 million in 2014. Proponents of the mission were therefore heartened last week to see the White House's 2015 NASA budget request include a line item of $15 million for Europa exploration planning, although the amount is far less than many would hope for. "If nothing else, we're excited to see NASA and the White House put it into budget lines and acknowledge it’s an important destination," says Casey Dreier, director of advocacy at the Planetary Society, a nonprofit organization devoted to solar system science and exploration. The size of the request — $15 million out of NASA's total budget request of $17.5 billion — is "a very small amount of money" but the symbolism of the move is significant, he says. "The fact that it's in there is a big, big shift, and I think a big part of that is the discovery of those plumes."

In December scientists announced that the Hubble Space Telescope had spotted geysers of water vapour shooting from Europa's surface, most likely originating from a liquid water ocean thought to exist under the moon's icy surface (see 'Hubble spots water spurting from Europa'). This theorized ocean has long been the focal point for hopes that Europa could host microbial life, but scientists assumed that a lander would be required to drill down into the ice to reach the liquid water for sampling. The geysers may make the water more accessible, however. "If that’s the case, maybe we don’t have to go to the ocean — the ocean will come to us," says astrobiologist Chris McKay of NASA Ames Research Center at Moffett Field, California.

The discovery of the geysers may have been the push that Europa needed to attain must-explore status. "The big question that ultimately drives us to study Europa is 'Does life exist there?'" says Kurt Retherford of the Southwest Research Institute (SwRI) in San Antonio, Texas, one of the co-discoverers of the water vapour plumes. "I think most of us had imagined that two or three large and expensive Europa missions would be needed before we find a clear answer to this compelling question, including future landers and deep-drilling devices."

Sending a probe to fly through the geysers would be cheaper but Retherford cautions against designing a Europa mission completely around the plumes. For one thing, the water vapour appears to be time-variable, and scientists cannot yet predict when the plumes will be active. "Until we are able to more firmly confirm our discovery of Europa’s water vapour plumes with additional observations in the next few years, it would seem inappropriate to focus a mission to exclusively study geysers at this time," Retherford says.

Europa presents other challenges as well: The moon is situated within Jupiter's intense radiation field, which would bombard spacecraft with radiation that could damage sensitive electronics. The best solution is to encase a Europa probe in thick shielding, which would increase its weight and thus the cost to launch it. The Jovian system is also far from Earth, probably at least a six-year journey, which adds to the time and expense of the total mission. "The Europa program is a complicated, expensive, step-by-step process because of these difficulties," McKay says.

Researchers have been working on Europa mission concepts for years. A proposed NASA mission called the Europa Orbiter, estimated to cost $4.7 billion, was canceled in 2002. Following that disappointment, scientists devised a reduced-cost plan for around $2 billion called the Europa Clipper, which would orbit Jupiter and make repeated low-altitude flybys of Europa. The Europa funding allocated to NASA in recent years has gone toward furthering that plan. "The Clipper concept is very mature," Dreier says. "They could basically start today on that mission."

After the NASA budget announcement last week, however, agency chief, Charles Bolden, said NASA was looking to spend less than $1 billion total on a Europa mission. That would put the spacecraft in a class of missions called "New Frontiers," a less expensive category than its bigger "Flagship missions." NASA plans to issue a "request for information" to solicit ideas from scientists on what type of Europa mission could be done for under $1 billion. But some worry that price point puts most major science goals out of reach. "No one has really thought much about what you can do with that minimal budget," Dreier adds.

Scientists' wish list for a Europa mission includes characterizing the chemistry of its subsurface ocean, learning how large the ocean is and determining the thickness of the ice shell that encloses it. "Measuring the composition of Europa's ice-water shell is important," says Lorenz Roth of the SwRI, lead author of the paper announcing the water geyser discovery. "Flying through plumes from active outgassing and measuring their composition" is another priority, Roth adds. Whether a New Frontiers mission can accomplish all those goals remains to be seen.

Europa has several champions in Congress. Texas Representative John Culberson, a Republican and a member of the House Appropriations Committee, has led the charge to insert Europa funding into the agency's budget. Culberson is next in line to become chairman of the subcommittee responsible for NASA's budget, where he could exert considerable influence to make the mission fly. That is comforting news to Europa proponents, who know it will take a cosmic alignment of political goodwill, money and technical know-how to reach Jupiter's enigmatic moon. If it happens, however, the payoff could be nothing less than finding life beyond Earth.