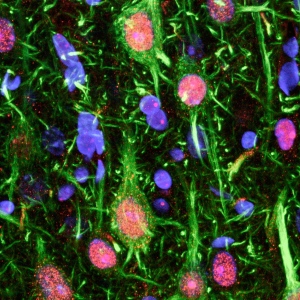 Nerve cells (red) that act as receptors for hypocretins, hormones that regulate the sleep cycle, are attacked by the immune system in narcolepsy patients.

As the H1N1 swine flu pandemic swept the world in 2009, China saw a spike in cases of narcolepsy — a mysterious disorder that involves sudden, uncontrollable sleepiness. Meanwhile, in Europe, around 1 in 15,000 children who were given Pandemrix — a now-defunct flu vaccine that contained fragments of the pandemic virus — also developed narcolepsy, a chronic disease.

Immunologist Elizabeth Mellins and narcolepsy researcher Emmanuel Mignot at Stanford University School of Medicine in California and their collaborators have now partly solved the mystery behind these events, while also confirming a longstanding hypothesis that narcolepsy is an autoimmune disease, in which the immune system attacks healthy cells.

Narcolepsy is mostly caused by the gradual loss of neurons that produce hypocretin, a hormone that keeps us awake. Many scientists had suspected that the immune system was responsible, but the Stanford team has found the first direct evidence: a special group of CD4+ T cells (a type of immune cell) that targets hypocretin and is found only in people with narcolepsy.

“Up till now, the idea that narcolepsy was an autoimmune disorder was a very compelling hypothesis, but this is the first direct evidence of autoimmunity,” says Mellins. “I think these cells are a smoking gun.” The study is published today in Science Translational Medicine1.

Thomas Scammell, a neurologist at Harvard Medical School in Boston, Massachusetts, says that the results are welcome after “years of modest disappointment”, marked by many failures to find antibodies made by a person's body against their own hypocretin. “It’s one of the biggest things to happen in the narcolepsy field for some time.”

It is not clear why some people make these T cells and others do not, but genetics may play a part. In earlier work2, Mignot showed that 98% of people with narcolepsy have a variant of the gene HLA that is found in only 25% of the general population.

Environmental factors, such as infections, probably matter too. Mellins’ working model is that narcolepsy happens when people with a genetic predisposition, which involves having several narcolepsy-related gene variants, encounter an environmental factor that mimics hypocretin, triggering a response from the immune system. The 2009 H1N1 virus was one such trigger: the team found that these same special CD4+ T cells also recognize a protein from the pandemic H1N1 virus.

Narcolepsy of course was around long before the 2009 pandemic. And since new cases of the disease tend to arise right after winter — following the seasonal peak in flu — it's possible that other strains or even other viruses are involved, too.

But the results do not fully explain the Pandemrix mystery, because other flu vaccines contained the same proteins but did not lead to a spike in narcolepsy cases. Regardless, Mellins says that it should be possible to avoid repeating the same mistake by ensuring that future flu vaccines do not contain components that resemble hypocretin.

Another loose end is that “they don’t show how these T cells are actually killing the hypocretin neurons”, adds Scammell. “It’s like a murder mystery and we don’t know who the real killer is.” He thinks that it is unlikely that the T cells are the true culprits; instead, they could be acting through an intermediary, or might merely be a symptom of some other destructive event.

“The results are very important, but they need to do a replication study in a large group of patients and controls,” says Gert Lammers, a neurologist at Leiden University Medical Center in the Netherlands and president of the European Narcolepsy Network. “If the findings are confirmed, the first important spin-off might be the development of a new diagnostic test.”