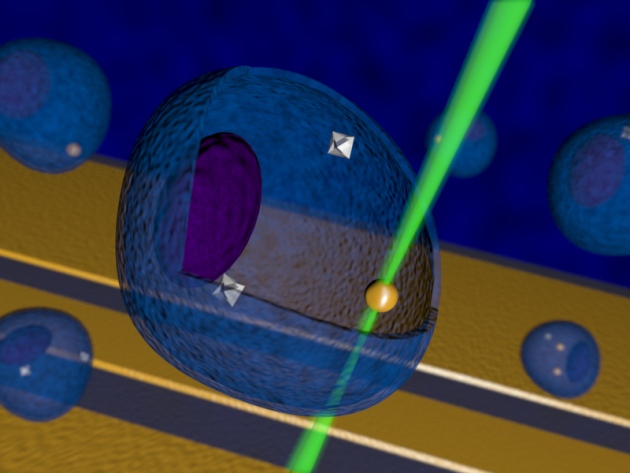 A tool originally developed for quantum computers can now map temperature changes within a living cell.

The technique exploits quantum effects in tiny diamond crystals, or 'nanodiamonds', to detect changes down to a few thousandths of a degree. The researchers were also able to heat selected parts of the cell using a laser. “We now have a tool to control temperature on a cellular level, and we can study how biological systems react to temperature change,” says Peter Maurer, a physicist at Harvard University in Cambridge, Massachusetts, and a member of the team publishing the result today in Nature1.

Diamond has emerged as a useful material for handling quantum information. In classical computing, information is stored in binary digits, or ‘bits’, which can be either a 0 or a 1. But a quantum bit, or ‘qubit’, can assume both states and an infinite number of states inbetween. Diamond stores qubits in the electron states of impurities in its carbon crystal lattice. The impurities typically comprise one nitrogen atom that has replaced one of the carbon atoms and a single-atom gap, or vacancy, next to the nitrogen.

Researchers have succesfully manipulated such nitrogen–vacancy centres — a step towards using them to perform quantum calculations. And because the nitrogen’s electrons are extremely sensitive to magnetic fields, diamond crystals have also shown promise in magnetic resonance imaging. Such magnetic probes are very sensitive to small temperature flucatuations. But researchers have begun to turn that potential weakness into a strength by using the probes as precise thermometers2, 3, and now Maurer and his colleagues have put this tool to work in biology.

Davide Castelvecchi interviews Peter Maurer on how he and his colleagues took the temperature inside a living cell.

For the latest technique, the researchers used a nanowire to inject diamond crystals into a human embryonic cell. They then shone green laser light on the cell, causing the nitrogen impurities to fluoresce with red light.

Variations in local temperatures inside the cell affect the intensity of red light emitted by the nitrogen–vacancy centres. The researchers were able to measure that intensity and use it to calculate the temperature of the corresponding nanodiamond. As diamond conducts heat well, the nanocrystal is likely to be the same temperature as its immediate cellular environment.

The researchers also injected the cell with gold nanoparticles, then trained a laser on them to heat up different parts of the cell. Thanks to their tiny diamond thermometers, they were able to precisely control where the temperature was rising and by how much. 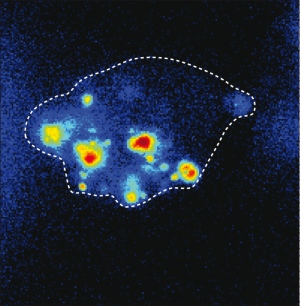 Nanothermometers can provide a 'heat map' of single cells.

A diamond-based thermometer could be a useful tool in basic biology, Maurer says, noting that a number of biological processes, ranging from gene expression to cellular metabolism, are strongly affected by temperature. For example, biologists could study the development of simple organisms, such as the nematode Caenorhabditis elegans, by controlling temperature locally. “You could heat individual cells and study whether surrounding cells slow down or speed up” their rate of reproduction, Maurer says.

Other teams have used fluorescent molecules to map temperature in human cells, but the Harvard thermometer is at least 10 times more sensitive than those techniques, Maurer says, detecting fluctuations of as little as 0.05 Kelvin. The authors say that there is room for improvement, however, because outside of living cells their tiny device has already achieved sensitivities of 0.0018 Kelvin.

The nanodiamond thermometers also have potential uses in chemistry to monitor how heat flows affect chemical reactions, especially at the interface between two substances, says David Awschalom, a physicist at the University of California in Santa Barbara, who led one of the earlier studies demonstrating diamond-based thermometry2.

“To me, it’s very gratifying to see that this works” in a living cell, Awschalom says.