Microchips could keep on getting smaller and more powerful for years to come. Research shows that wires just a few nanometres wide conduct electricity in the same way as the much larger components of existing devices, rather than being adversely affected by quantum mechanics.

As manufacturing technology improves and costs fall, the number of transistors that can be squeezed onto an integrated circuit roughly doubles every two years. This trend, known as Moore's law, was first observed in the 1960s by Gordon Moore, the co-founder of chip manufacturer Intel, based in Santa Clara, California. But transistors have now become so small that scientists have predicted that it may not be long before their performance is compromised by unpredictable quantum effects. 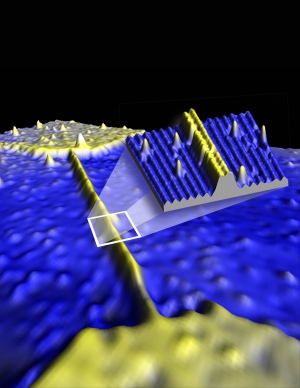 Resistivity, a measure of how much a material opposes the flow of electrical current, has previously been shown to increase exponentially as the width of a wire decreases below 10 nanometres, which would impede the performance of devices with atomic-scale components.

David Ferry, an electrical engineer at Arizona State University in Tempe, points out that key parts of Intel’s latest generation of microchips are just 22 nanometres long — only about 100 times the size of the spacing between atoms in a silicon wafer. “The question is, how much further can they go?” asks Ferry.

Potentially quite a lot further, according to a study published today in Science1. Michelle Simmons, a physicist and director of the Centre for Quantum Computation and Communication Technology at the University of New South Wales in Sydney, Australia, and her colleagues made atomic-scale wires by covering a silicon crystal with a layer of hydrogen atoms and then carving out several-nanometre-wide channels in the hydrogen using the tip of a scanning tunnelling microscope. They absorbed phosphorous atoms onto the exposed silicon and after heating covered the whole thing with crystalline silicon, creating wires of phosphorous-doped silicon in which the phosphorous provided the extra electrons needed to generate a current.

The width of the wires varied from 1.5 to 11 nanometres, but the researchers found that the resistivity did not differ substantially. This, they say, shows that the wires still obey Ohm’s law of classical electronics, which implies that resistivity should not change with sample size.

Simmons says that there are two main reasons that the resistivity is constant: a strong overlap of electron wavefunctions resulting from the high density of phosphorous atoms in the wires; and the wires are completely encapsulated in silicon, so they have no external surfaces that can inhibit the mobility and availability of electrons.

Simmons points out that her team's approach could not be used alongside current techniques for mass-producing computer chips, which involve printing entire circuits onto silicon wafers rather than painstakingly drawing out individual components. But, she says, the group's work is important because it shows that there are no fundamental electrical limits to making wires in silicon down to the atomic scale..

Ferry agrees that the work has significant implications for the microchip industry. “Before this paper there was perhaps one more generation of microchips, whereas now there might be two or three generations,” he says. He adds that it may be possible to reduce component lengths to as small as 5 nanometres.

But Suman Datta, an electrical engineer at Pennsylvania State University in University Park , doubts that Weber and Simmons' work will have a direct impact on the manufacture of conventional electronic devices. He praises the study as a “nice science experiment” but argues that making practical chips will probably involve lowering the concentration of phosphorous and therefore increasing resistivity.

Ferry doesn’t think that the low resistivity of the wires is in itself the crucial point. What matters, he says, is that the wires exhibit classical rather than quantum behaviour. “When you have quantum coherence the transistor doesn’t turn on and off like you expect it to,” he explains, “and if the transistor doesn’t work like it ought to then Moore’s law is ended.”