The surface of the dwarf planet Ceres (shown here) has fewer large craters than researchers expected.

Not all of the puzzling bright spots on the dwarf planet Ceres are alike. The closest-yet images of the gleams, taken from 45,000 kilometres away, show that at least two of the spots look different from one another when seen in infrared wavelengths.

NASA's Hubble Space Telescope spied many of the bright spots years ago, but the observations from NASA's Dawn spacecraft — which began looping around Ceres on 6 March — are the first taken at close range. The images were released on 13 April in Vienna at a meeting of the European Geosciences Union.

Scientists say that the bright spots might be related to ice exposed at the bottom of impact craters or some type of active geological features. The areas glimmer tantalizingly in a new full-colour map of Ceres that was obtained in February, but not released until the conference. The map uses false colours to tease out subtle differences on the otherwise dark surface of Ceres.

“This is the first idea of what the surface looks like,” said Martin Hoffmann, a Dawn scientist from the Max Planck Institute for Solar System Research in Göttingen, Germany.

The Dawn spacecraft's view of the bright regions is sharpening as it gets closer to Ceres. The new infrared images reveal differences between spot 1, near Ceres's equator, and a pair of bright spots collectively known as spot 5. Some scientists have speculated that the latter could be an icy plume.

Spot 1 seems darker than its surroundings in images from Dawn's infrared spectrometer, said Federico Tosi, a Dawn scientist at the Institute for Space Astrophysics and Planetology and the Italian National Institute for Astrophysics in Rome. This suggests that the area is cooler than the rest of the dwarf planet's surface, supporting the theory that the spot is made of ice.

But for some reason, spot 5 — the brightest feature seen on Ceres — does not show up in the infrared images. “One possibility is that we still don’t have enough resolution to see it in the proper way,” said Tosi. 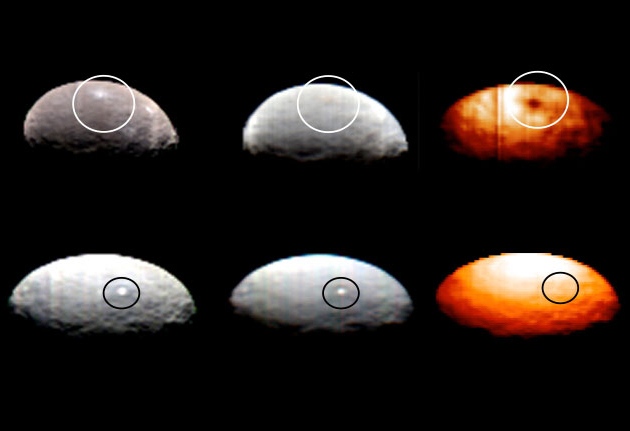 Infrared images suggest that Spot 1 (top row), an area on Ceres, is made of ice. But the pair of bright gleams known as Spot 5 were invisible to an infrared camera (bottom right).

Dawn has also shown that some parts of Ceres are pockmarked by impact craters, while other regions seem smooth. So far, there seem to be fewer large craters on Ceres than expected, says the mission's principal investigator, Christopher Russell of the University of California, Los Angeles.

At nearly 1,000 kilometres across, Ceres is the biggest object in the asteroid belt, which lies between Mars and Jupiter. Researchers expect that a close look at the surface of Ceres will reveal clues about the formation of protoplanets in the early Solar System, 4.5 billion years ago. Even at this distance, the images show complex craters and long, deep-curving features that hint at a violent past, Hoffmann said.

Dawn has been travelling towards Ceres since its 2007 launch, with a side visit to the asteroid Vesta in 2011. The spacecraft was technically captured by Ceres’s gravity on 6 March, but has taken weeks to approach the dwarf planet. (Scientists were forced to adopt a longer, more-leisurely trajectory to Ceres in September, after an errant cosmic ray hit the spacecraft and temporarily knocked it out of commission.)

Dawn produced another set of images on 10 April, but only a small fraction of Ceres’s surface was illuminated at the time and mission scientists have not yet released the pictures. The spacecraft will begin detailed science investigations on 23 April, after it settles into permanent orbit around Ceres.