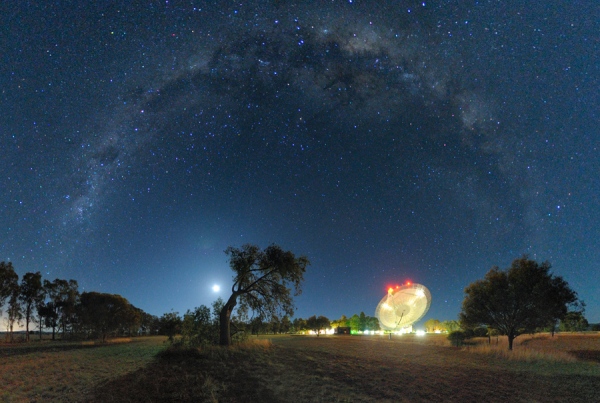 The mystery radio bursts detected by the Parkes Observatory, seem to be coming from way beyond the Milky Way.

Astronomers have for the first time detected a population of ultrashort radio bursts with properties that strongly suggest that they originate from outside the Milky Way Galaxy. Lasting for a few thousandths of a second and estimated to erupt roughly every 10 seconds, the mysterious bursts are likely to be caused by a previously unknown class of radio-emitting phenomenon, researchers report in Science1.

“This is one of the most important radio discoveries in the last couple of decades,” says Scott Ransom, an astronomer at the US National Radio Astronomy Observatory in Charlottesville, Virginia, who was not part of the study.

Although radio signals that vary over days to months have been recorded from distant galaxies for decades, ultrashort signals from beyond the Milky Way had never been definitively detected, notes study co-author Dan Thornton, an astronomer at the University of Manchester, UK. He and his colleagues embarked on a search for extragalactic radio bursts after a report in 2007 suggested that one such signal had been tentatively found2.

Using archived data from the 64-metre Parkes Radio Telescope in Australia — the same instrument that had recorded the tentative single burst — Thornton and his collaborators found four bursts that seemed to come from outside the Galaxy.

As radio waves travel through ionized material in space, they encounter a sea of electrons that slows down the lower-frequency components of the signals, but leaves higher-frequency components almost unaffected. As a result, a narrow radio signal travelling a long distance spreads out or disperses. The four radio signals found by Thornton and his team are so spread out that the distribution of electrons in the Milky Way can account for only 3–6% of their dispersion. That is a strong indication that all four signals, which come from different regions of the sky, originate outside the Galaxy. “These things look conclusively to be extragalactic,” says Ransom.

Models of the electron content of intergalactic space suggest that the bursts crossed between 1.7 billion and 3.2 billion parsecs (between 5.5 billion and 10 billion light years) of space to reach Earth, coming from much farther away than the edge of the Milky Way.

The brevity and brightness of the bursts suggests they were emitted by some kind of small, energetic object such as a magnetar, a neutron star with an extremely powerful magnetic field. The bursts “are signalling the existence of a cataclysmic event involving large amounts of mass and or energy”, says Thornton. But their origin remains a mystery because astronomers were unable to pinpoint where the fleeting signals came from.

Researchers at Parkes are now working to find bursts in real time, so that optical telescopes can hunt for any visible light that may be given off by the same source. They could use the wavelengths of that light to calculate exactly how far away the source is.

If astronomers can pinpoint the distances, they can use the dispersion of the radio signals to measure the number of electrons in the space between galaxies. The electron abundance is representative of the amount of baryons — protons and neutrons — that resides in intergalactic space.

That number is of intense interest because it could solve a cosmic riddle: why the abundance of baryons inside galaxies falls short of the total tally that observations of the early Universe suggest should exist today. The new class of bursts could finally locate the missing baryons, notes Thornton.