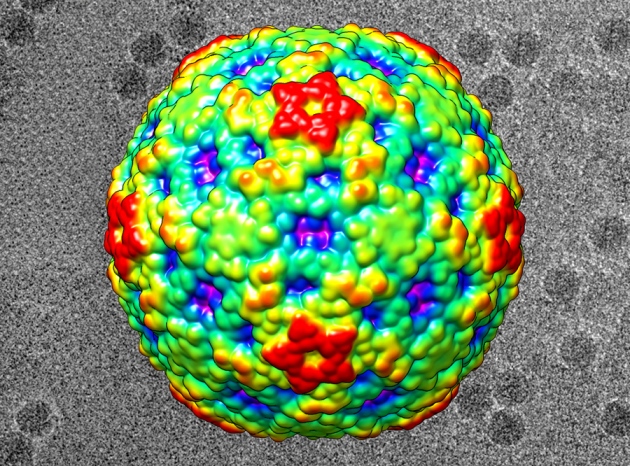 Enterovirus D68 causes respiratory infections, and there are suggestions that it could be behind mysterious cases of paralysis in children.

Since August 2014, more than 100 children and young adults in the United States have developed a mysterious paralysis. Many of them had fevers before losing strength in one or more limbs, and the cases coincided with a wider epidemic of a little-known respiratory pathogen. That virus, enterovirus D68 (EV-D68), is the leading candidate for the cause of the paralysis, which few children have recovered from.

Yet researchers have not definitively linked the two, or determined how the virus could cause the children’s symptoms. A study published on 28 January in The Lancet1 that describes a cluster of cases from Denver, Colorado, strengthens the link, but falls short of providing a 'smoking gun'. Here is what we know about the virus — and what scientists are trying to find out.

It belongs to the enterovirus family, which includes poliovirus and the pathogens that cause common colds; it is most similar to the rhinoviruses that cause respiratory infections. Although EV-D68 was first isolated in the 1960s, it is relatively uncommon among enteroviruses circulating worldwide. However, since August 2014, the virus has been linked to more than 1,000 respiratory infections in the United States, some of them severe, and France has seen cases, too. John Watson, a medical epidemiologist at the US Centers for Disease Control and Prevention (CDC) in Atlanta, Georgia, says that last year, EV-D68 was the predominant type of enterovirus circulating in the country. “That’s a first,” he says. Genome sequencing2 of viruses recovered from respiratory cases in St Louis, Missouri, shows that the EV-D68 strain circulating in the United States is most closely related to viruses that caused a pneumonia-like illness in three children in Thailand in 20113.

What is the evidence that links EV-D68 to the cases of paralysis?

It has mostly to do with the timing: the cases of paralysis appeared during a wider outbreak of EV-D68, says Watson, whose team at the CDC’s Division of Viral Diseases is investigating the link. Researchers detected EV-D68 in nasal swabs from 8 out 41 people with paralysis who were tested, and another 9 people tested positive for related viruses4.

The Lancet report adds to that circumstantial case. A team led by Samuel Dominguez, an epidemiologist at Children’s Hospital Colorado in Aurora, describes1 a cluster of 12 cases of paralysis that began between August and October 2014, during a surge in visits to the hospital for respiratory symptoms. Nasal swabs from 8 of the 11 children affected contained enteroviruses, with 5 of them containing EV-D68. Lesions of uncertain nature in the children's spinal cords and brainstems, detected using magnetic resonance imaging (MRI) scans, were characteristic of other enteroviruses, such as polio. However, the strongest proof that the virus underlies the paralysis would be if it were found in affected people's cerebrospinal fluid, says Watson, and neither Dominguez’s team nor any other researchers have found any such trace.

How else are scientists investigating the potential link?

It is possible that EV-D68 or another enterovirus is triggering an immune response that causes nerve damage. Researchers at the University of Texas Southwestern Medical Center in Dallas plan to collect blood from children with paralysis to see whether anything in it can damage laboratory-grown motor neurons, according to The New York Times. A team at Johns Hopkins University in Baltimore, Maryland, plans to compare the genomes of children with paralysis against the genomes of their siblings, who may have also been exposed to the virus, to see whether any genetic factors set them apart. It is also possible that the connection between EV-D68 and paralysis is merely a coincidence.

Is there any way of treating EV-D68 infections?

There are no approved antiviral treatments for enteroviruses. A team led by Michael Rossmann, a virologist at Purdue University in West Lafayette, Indiana, reported the molecular structure of EV-D68 in a Science paper this month5 and found that an experimental drug effective against other rhinoviruses binds to a portion of the virus involved in infecting cells. The drug, called pleconaril, prevents the virus from replicating in human cells. Its development was scrapped after clinical trials showed that it counteracted the hormones in birth-control medication; this would not be a problem in young children infected with EV-D68, Rossmann notes, but the small number of infections means that drug companies are unlikely to invest in its development.

Are there likely to be more cases?

Public-health officials will be looking out for them. Enteroviruses are always in circulation, and respiratory infections tend to spike in the late summer and autumn in North America and Europe. The incidence of EV-D68 respiratory infections has fallen off considerably since October last year, but it remains to be seen whether the virus will return with the same strength later this year. Improved tests to detect the virus and more diligent surveillance offer researchers an opportunity to learn more about the virus, says Kristine Wylie, a genome scientist at Washington University in St Louis, Missouri, who led the EV-D68 sequencing effort2. “Everyone is waiting to see what the next year brings: will it be this virus again, or will it be something different?”