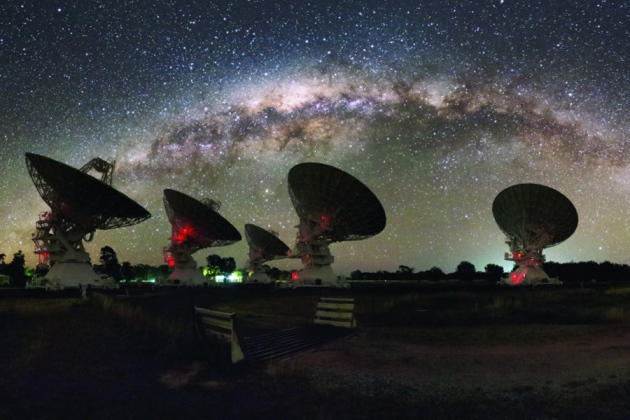 The Australia Telescope Compact Array, in New South Wales, which helped to identify the location of a fast radio burst.

Since 2007, astronomers have detected curious bright blasts of radio waves from the cosmos, each lasting no more than a few milliseconds. Now scientists have been able to pinpoint the source of one of these pulses: a galaxy 1.9 billion parsecs (6 billion light years) away. It probably came from two colliding neutron stars, says astronomer Evan Keane, a project scientist for the Square Kilometre Array (SKA). Keane, who works at the SKA Organization's headquarters at Jodrell Bank Observatory outside Manchester, UK, led the team that reports the detection in Nature1.

The discovery is the “measurement the field has been waiting for”, says astronomer Kiyoshi Masui of the University of British Columbia in Vancouver, Canada. By finding more such fast radio bursts (FRBs) and measuring the distance to their source, astronomers hope to use the signals as beacons to shed light on the evolution of the Universe.

“The field is about to transition from being kind of a fringe, astrophysical-curiosity freak show to potentially a mainstream research area”

Eyes on the skies

All but one of the 16 previously reported FRBs were found long after the signals reached Earth, by trawling through archives of telescope data. But today, supercomputers can process these signals in real time and detect them as they arrive, says Keane.

On 18 April 2015, the Parkes radio telescope in Australia detected a burst lasting less than 1 millisecond, one of the shortest yet. Parkes’ resolution isn’t fine enough to pinpoint the location of signals, but Keane, who saw the news when he checked emails buzzing into his phone, alerted a network of higher-resolution ground- and space-based telescopes. Two hours after the initial burst, the Australia Telescope Compact Array in New South Wales caught what appeared to be a fading radio afterglow in the same area.

This narrowed the search field enough for the 8.2-metre Subaru Telescope on Mauna Kea, Hawaii, to home in on a lone elliptical galaxy, which Keane and his team say is almost certainly the source of the burst.

The galaxy is relatively old, and so makes new stars very rarely. Because of that, Keane’s team thinks that the burst came from two colliding neutron stars, which orbited each other in a death spiral until they merged. The brevity of the burst is consistent with the expected timescale for such an event, rather than a collision between larger objects such as white dwarves, or a massive supernova. (If the event was a neutron-star merger, it would also have emitted gravitational waves — the ripples in space-time that the US Laser Interferometer Gravitational-Wave Observatory reported detecting two weeks ago.)

Not all FRBs fit the scenario for a neutron-star collision. Last December2, Masui and his colleagues reported a detection by the Green Bank Telescope in West Virginia that seems to originate from a young neutron star with a strong magnetic field emitting intense flares. This suggests that there are multiple kinds of bursts, from different origins. “The implications for the origins of FRBs are still a bit unclear,” says Victoria Kaspi, an astronomer at McGill University in Montreal, Canada.

Imprints of the Universe

As a radio pulse from an FRB ploughs through space, its staccato blast is smeared out by free-floating electrons in its path, so that radio telescopes detect the signal as more like a falling note.

Now that Keane and his team know the distance to the new FRB, they can use the length of the signal to reveal how much material it passed through. This could solve a longstanding mystery: precise measurements of the cosmic microwave background — the afterglow of the Big Bang — suggest that around 4% of the observable Universe today should be composed of ordinary matter (not dark energy or dark matter). But after totting up what they can see, researchers say around half that matter remains unaccounted for.

The amount of signal smearing from the team’s FRB indicates that the ‘missing’ matter is indeed there, Keane's team now report. Future bursts detected all around the sky could be used as probes to map that matter in detail. A similar approach could yield a map of the magnetic fields between galaxies, as they alter the bursts’ polarization signature in detectable ways.

Three instruments that will be able to detect several FRBs per day are either ramping up or set to begin operations this year: the Canadian Hydrogen Intensity Mapping Experiment in British Columbia, the upgraded Molonglo Observatory Synthesis Telescope near Canberra and the Five-hundred-meter Aperture Spherical Radio Telescope in Guizhou province, China.

“The field is about to transition from being kind of a fringe, astrophysical-curiosity freak show to potentially a mainstream research area,” says astronomer Duncan Lorimer of West Virginia University in Morgantown, who led the team that found the first FRB back in 20073, and wrote a News & Views4 to accompany the latest report. “We’ll have the potential to soon be overwhelmed by these things,” he says.

The original version of this article gave the wrong affiliation for Evan Keane.