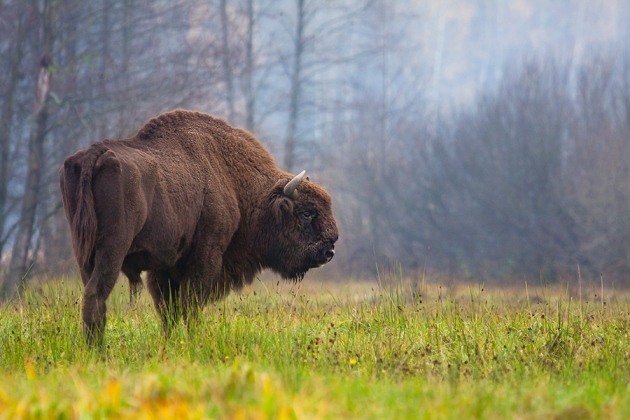 European bison could be the result of a hybridization between two ancient, now extinct, species.

The European bison (Bison bonasus) may be the continent’s largest land mammal, but its origins have long been a mystery. Hunted for millennia and pushed into the wild corners of Europe as agriculture expanded, the bison — also known as wisent — were reduced to just a few zoo specimens by the late 1920s. Today, a semi-wild population roams Białowieża Forest, near the Poland–Belarus border, where they slip between hornbeams and mighty oaks, their curly coats and horns lending an aura of the Pleistocene to the ancient forest.

It took a reach into the past using ancient DNA and cave art to unveil the wisent’s origin story. Researchers published the species’ family tree on 19 October in Nature Communications1.

The team took almost a decade to complete their work. Much of the analysis used ancient mitochondrial DNA derived from 65 bison specimens ranging from 14,000 to more than 50,000 years ago. But it wasn’t until technological advances made it possible to examine nuclear DNA that researchers were able to produce a coherent family tree.

According to the team’s analysis, the wisent is a hybrid of two extinct animals: the steppe bison (Bison priscus), the Eurasian ancestor of the American bison, and the aurochs (Bos primigenius), the ancestor of modern cattle. The steppe bison went extinct more than 11,000 years ago and the last aurochs was shot in 1627. From the DNA evidence researchers estimate that hybridization took place 120,000 or more years ago.

In most cases, hybrid animals are less fertile and fit than their parents. But in this case, a whole new species seems to have taken flight.

To have flourished, the hybrid must have had some qualities that made it competitive during climate changes in the Pleistocene, says author Julien Soubrier, a palaeogeneticist at the University of Adelaide in Australia.

In the Urals, for example, wisents (and an extinct related group the researchers call Clade X) were found before 50,000 years ago and again after 34,000 years ago, when Europe was very cold and vegetation in the Urals included tundra and grasslands. In between, steppe bison seem to have roamed the region during an era of warm summers. The cold-adapted wisent and related animals presumably moved further north.

To corroborate this timing, the team looked to an unusual source: cave art. Cave drawing and rock art around the world are a source of “incomparable and precious data because they were drawn by ‘artist-hunters’ trained to observe living animals for hunting,” says Gilles Tosello, a cave-art expert based in Toulouse, France. 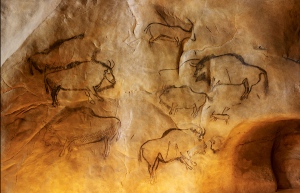 Paintings in Niaux cave of the European bison from about 17,000 years ago.

The alternating dominance of wisent and steppe bison might be reflected in cave paintings created during this period, says Colin Groves, an expert on cattle and their ancestors, and on human evolution, at the Australian National University in Canberra. He suggested that the team take a look at prehistoric cave art, because bison were a favourite subject among cave painters in Europe. Soubrier agreed, and asked Tosello and his wife and colleague Carole Fritz for help.

Fritz and Tosello, who were lead artists on a huge recreation of the art at Chauvet cave in France, had already noticed that there seemed to be two types of bison represented in European cave paintings. In the Chauvet art, which is around 30,000–36,000 years old, the bison were drawn with long horns and a very high shoulder compared with the rump. However, in more recent cave art from the Magdalenian period (around 17,000–10,000 years old), the couple saw animals with a more horizontal backbone and smaller horns.

Given the temporal correspondence with the fossil record, these two forms were likely to be the steppe bison and the wisent, respectively, the team says.

A matter of survival

This is not the first scientific paper to use cave art as data. Arne Ludwig at the Leibniz Institute for Zoo and Wildlife Research in Berlin and his team used the spotted patterns on horses in cave art as an inspiration to find genes in ancient horse DNA that could have given rise to the 'leopard' coat pattern recognized by horse breeders today2.

“In my opinion, people at this time had deep knowledge about details in their surrounding environment,” says Ludwig. “That was essential for their survival and of course it’s no surprise that they separated between the steppe bison and the wisent.”

But not everyone is convinced. “There is no evidence to link the two [lineages of] European bisons with the two kinds of bison morphs drawn in cave paintings,” says systematist Alexandre Hassanin at the National Museum of Natural History in Paris. He believes the steppe bison, the American bison, and the wisent are all the same species, and doesn't think that ancient hybridization with aurochs created a new species.

But others in the field give the work the thumbs-up. “This study again illustrates the power of the ancient DNA,” says Hans Lenstra, an expert on the genetics of domestic animals and their wild relatives at Utrecht University in the Netherlands. “Correlation with cave art and climate changes then yielded a consistent and interesting story.”