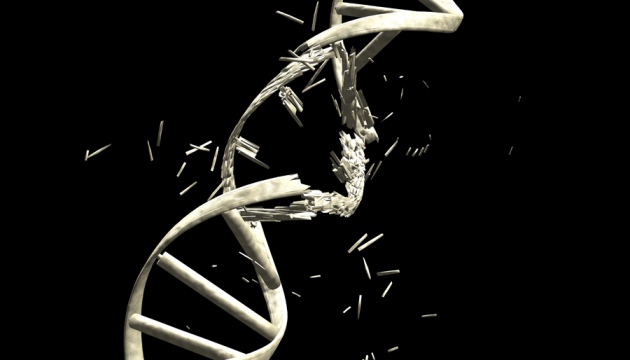 Modified DNA can be patented but isolated human genes cannot, according to the US Supreme Court.

There was a party waiting for Elizabeth Chao when she arrived for work last week at Ambry Genetics, a medical-diagnostics company in Aliso Viejo, California. On 13 June, the US Supreme Court ended the 30-year-old practice of awarding patents on human genes — an outcome that Chao, a geneticist and chief medical officer of Ambry, had wanted for a long time. “It’s such a win for patients,” says Chao. “Everyone was crying, jumping up and down and shouting.”

In Washington DC at law firm Sughrue Mion, patent lawyer William Simmons was having a rather different day, fielding phone calls from agitated clients in the US biotechnology industry. Although the Supreme Court case was limited to human DNA, the ruling will probably be applied to other molecules such as proteins, as well as to other organisms — including agriculturally important plants. “It’s a mess,” says Simmons. “We had a lot of clients saying, ‘What are we going to do?’” 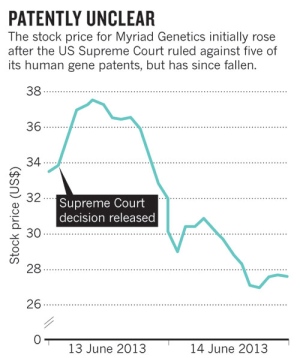 Despite the US Supreme Court decision, Myriad Genetics still has more than 500 claims covering its tests for breast-cancer genes. This reassured investors, and its stock price soared (see ‘Patently unclear’).

But the price later slumped as firms including California’s Ambry Genetics and Quest Diagnostics in Madison, New Jersey, said that they plan to launch their own tests. Myriad’s test costs US$4,000, but competitors’ tests could cost half that.

Some lawyers say that firms are risking lawsuits by infringing Myriad’s patents, but others think that the competitors could design genetic tests that avoid the remaining narrow claims. Any lawsuits could last for years — by which time many of Myriad’s patents will have expired.

Yet the grey area between this ruling and the court’s second point — that patents can be claimed on modified DNA — has puzzled observers. Gene patent holders, including Myriad, had long argued that the mere act of isolating a piece of DNA from a genome was enough modification for a patent claim, because isolation requires severing the chemical bonds that tether the gene to its surroundings. The Supreme Court justices — and many scientists — disagreed. But patent lawyers are now tearing their hair out over the issue of how much modification is enough. “They’ve created this bizarre rheostat about the amount of change that would need to take place chemically in order to justify a patent,” says Simmons.

Some of the confusion stems from how the Supreme Court justices defined the term synthetic DNA. The court seemed to use it to refer to DNA that had been modified by the inventor. It also gave explicit patent protection to a modified form of DNA called complementary DNA (cDNA), which is made in the lab with an enzyme that creates DNA using an RNA template. Patents on cDNA are deemed more commercially valuable than patents on naturally occurring genes, in part because cDNA tends to be shorter and easier to work with in the lab than genes in their natural state. It can also be used for diagnostic tests if the mutations of interest are contained within the RNA template, as is often the case. But patents on cDNAs, at least for known genes, are largely a dying breed because making cDNA is a common practice that would be considered too obvious for a robust patent.

Increasingly, scientists define synthetic DNA as that which has been made from scratch by assembling the individual bases of DNA into a given sequence, often using machines. And the justices did not say whether synthetic DNA of this sort could be patentable if it exactly copied a naturally occurring sequence.

Lawyer Patrick Waller, of Boston firm Wolf Greenfield in Massachusetts, says that the decision could jeopardize patents on short stretches of synthetic DNA that are used to check whether the genome contains certain sequences, or to create multiple copies of particular DNA regions.

These issues now fall to the lower courts and to patent examiners who must interpret the Supreme Court opinion. Shortly after the decision was issued, Andrew Hirshfeld, a deputy commissioner at the US Patent and Trademark Office in Alexandria, Virginia, issued a memo suggesting that such patents would no longer be granted. That memo, intended to serve as interim guidance until the office updates its policies to incorporate the new ruling, is a sign that the patent office will be interpreting the Myriad decision strictly, says David Berry, a professor of intellectual-property law at the Thomas M. Cooley Law School in Lansing, Michigan. “Companies are just going to have to think up different approaches to claiming their inventions,” he says.

Biotech companies might already be changing their approach. Simmons now tells clients to protect certain inventions as trade secrets, which are not publicly disclosed, rather than as patents. After the Myriad decision, he says, he may also instruct clients to introduce many modifications to the DNA or proteins they intend to patent, to make them as different as possible from naturally occurring forms. “There’s no guidance here as to what is a sufficient amount of change to warrant a patent,” says Simmons. “It’s insane.”