Two scientists recently hit the headlines when they created mutant strains of H5N1 influenza, which can spread between mammals (see ‘Fears grow over lab-bred flu‘). But although Ron Fouchier of Erasmus Medical Center in Rotterdam, the Netherlands, spoke publicly to explain and defend the work, Yoshihiro Kawaoka, of the School of Veterinary Medicine at the University of Wisconsin–Madison, has been far quieter, deliberately saying nothing to the press.

That has now changed. At a Royal Society meeting in London about H5N1 research yesterday, the thus-far silent scientist spoke openly about his results after the National Science Advisory Board for Biosecurity (NSABB), an independent advisory group to the US government, unanimously voted last week that Kawaoka’s paper should be published in full. Nature intends to “proceed with publication as soon as possible”. 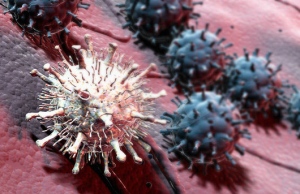 Lab-bred mutant versions of H5N1 influenza are transmissible in mammals.

His experiments began when he tweaked the H5N1 virus to reproduce in a ferret’s airways. He introduced random alterations into its haemagglutinin (HA) protein, which it uses to stick to host cells. From the resulting library of mutants, he isolated viruses with two mutations in HA — N224K and Q226L — that could stick to receptors in human tracheal cells. That is something H5N1 viruses cannot usually do.

Kawaoka then combined this mutated HA-encoding gene with other genes from the H1N1 virus behind the 2009 pandemic, mirroring the natural process through which wild viruses swap genes. This chimeric virus still would not go airborne.

However, Kawaoka noticed that one of the ferrets he infected had especially high levels of virus in its nose. These viruses had picked up a third HA mutation — N158D — and could now spread between neighbouring ferrets. Kawaoka found that two of six healthy animals picked up infections from neighbours they had no contact with. Along the way, the virus acquired a fourth mutation — T318I.

With all four mutations, the virus spread even more easily. Kawaoka exposed six more uninfected ferrets to sick peers in adjacent cages. Within a week, he had found signs of the virus in all of them.

However, this mutant virus didn’t kill any of the animals, and spread more slowly than the 2009 pandemic H1N1 strain. It was also vulnerable to our current antivirals and vaccines. Fouchier’s virus shares the same inefficient spread and non-lethal character, although at the time of the conference, he was still unable to share any details.

One of Kawaoka’s four critical mutations, T318I, is found on the stalk of the mushroom-shaped HA protein, and probably helps to stabilize it. The other three are found in the head. N224K and Q226L probably affect its ability to stick to human cells. The fourth mutation, N158D, abolishes a ‘glycosylation site’ — a part of the protein’s head where a carbohydrate molecule can be fused. It is unclear how this affects the protein.

Three of these mutations are new, at least in public databases. N158D is the only one of the four mutations that has been documented in wild birds. It was found in several samples collected from Egypt in recent years, and seems to be common among viruses that jumped into humans. This mutation is clearly one to study and watch. It also illustrates some of the benefits of this controversial work. Data about N158D were already in published flu sequences but Kawaoka says, “Unless you knew what to look for, you wouldn’t have found it.”

Here is a Storify giving a real-time account of how the meeting unfolded. And read more about the research and the controversy surrounding it in Nature‘s mutant flu special.

The original headline of this story, 'Dangerous flu mutations revealed' has been changed, to reflect the fact that while the mutations allowed the virus to spread easily in mammals, they did not make it more likely to kill those infected.