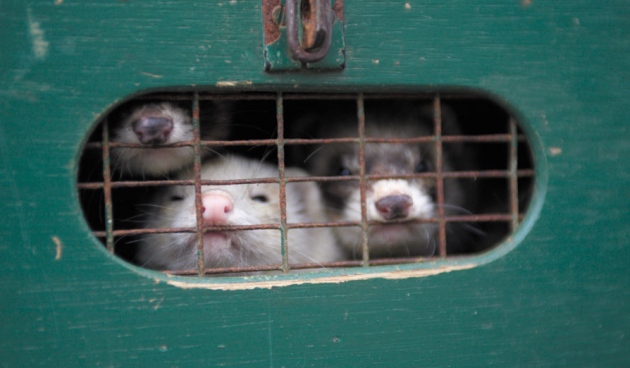 A mutant flu virus became more transmissible as it passed between lab ferrets, raising fears that mutations in the wild could create a human pandemic strain.

Avian H5N1 influenza viruses in the wild may be one small step away from spreading effectively between mammals. That is the sobering message from a controversial study by Yoshihiro Kawaoka at the University of Wisconsin–Madison, published online by Nature1 after months of debate about how to release the findings publicly.

“After wanting to read it for so long, it was like eating again after fasting,” says Vincent Racaniello, a virologist at Columbia University in New York. “And it does not disappoint.”

H5N1, commonly known as bird flu, is highly pathogenic and often lethal in humans, but it cannot spread efficiently between people and cases seem to be rare. To find out if H5N1 could evolve easy transmissibility between humans, Kawaoka and his team mutated its haemagglutinin (HA) gene, which produces the protein that the virus uses to stick itself to host cells. Because flu viruses in the wild can also gain new properties by swapping genes, the researchers combined this gene with seven others from a highly transmissible flu virus, the H1N1 strain that caused a pandemic in 2009.

Kawaoka found that the hybrid virus could spread between ferrets in separate cages after acquiring just four mutations. Three of these allow the HA protein to stick to receptor molecules on mammalian cells, and the fourth stabilizes the protein. “Before we initiated this experiment, we knew that receptor specificity is important,” says Kawaoka. “We didn’t know what else was needed.”

Worryingly, some Middle Eastern H5N1 strains can already recognize human receptors2. Kawaoka’s work suggests that they could be just one stabilizing mutation away from being able to spread between humans. Discovering “that HA needs to be stable to be transmissible through the air between mammals” is a key finding, says influenza virologist Wendy Barclay at Imperial College London.

The first hints of Kawaoka’s work emerged last year, along with details of similar experiments led by Ron Fouchier at the Erasmus Medical Center in Rotterdam, the Netherlands. The news sparked intense discussion about whether the benefits of knowing about these potentially dangerous mutations outweighed the risks of publishing them openly. The US National Science Advisory Board for Biosecurity (NSABB) — an independent government advisory board — recommended in December 2011 that both papers should be censored before publication, citing concerns that the strains could be used by bioterrorists, or that untrammelled proliferation of the work would raise the risk of an accidental release from a lab.

But after a meeting that included international flu experts and health-agency representatives, the NSABB decided in March that revised versions of the two papers should be published in full (see go.nature.com/5tqfen). The board was swayed by plans to tighten the oversight of such work, as well as by fresh information about the potential benefits to surveillance. It also acknowledged the difficulties in restricting access to the research. Fouchier has just received an export licence from the Dutch government, which has allowed him to submit his paper to Science (see go.nature.com/2c1hjr).

H5N1 viruses prefer to stick to receptor proteins containing Siaα2,3Gal, which are found on the surface of avian cells. In contrast, cells in human upper airways are dotted with receptors containing Siaα2,6Gal, which have a slightly different shape. To see whether H5N1 could come to recognize the human-type receptors, Kawaoka’s team randomly mutated its HA protein. Of the 2.1 million different strains they created, only one recognized the human-type receptors instead of the avian ones. This mutant had four amino-acid changes, two of which were necessary for its new-found specificity: one from glutamine to leucine (Q226L) and one from asparagine to lysine (N224K).

Next, Kawaoka fused the mutated HA gene with seven others from the H1N1 2009 pandemic strain. Such a hybrid virus might emerge naturally: both H5N1 and H1N1 have been found in pigs, and Kawaoka had previously shown that they have compatible genes3. The hybrid virus evolved further after Kawaoka’s team gave it to ferrets — the best animal model for human influenza. After six days, one ferret was riddled with tens of thousands times more virus than the others. On sequencing this particular virus strain, the researchers found that it had acquired a third HA mutation: from asparagine to aspartic acid (N158D).

This new addition allowed the virus to spread between the ferrets for the first time. After the researchers infected animals with the triple-mutant strain, the virus could infect some ferrets in nearby cages by airborne spread. Some of the transmitted viruses had a fourth mutation in HA — a threonine to an isoleucine (T318I) — and these proved even better at spreading in subsequent ferret experiments (see ‘Making mutant flu’).

The hybrid virus did not kill any of the ferrets it infected. It was slower to spread than the 2009 pandemic H1N1 strain, caused less severe damage in the lungs, and was vulnerable to both the front-line drug Tamiflu and a prototype vaccine against H5N1. It is unclear whether the virus could spread between humans as well as it did between ferrets, or whether the four HA mutations would confer the same ability on a purely H5N1 virus. The seven H1N1 genes in Kawaoka’s hybrid may have contributed to its airborne spread. Nevertheless, “this work reminds us just how vulnerable we potentially are to relatively small changes”, says virologist Jeremy Farrar, director of the Oxford University Clinical Research Unit in Ho Chi Minh City, Vietnam.

The nature of the four mutations suggests that the virus faces an important trade-off as it evolves. Flu viruses need to merge their membranes with those of their host cells in order to release genetic material. The HA protein initiates this process by changing shape in response to the cells’ pH, but the three receptor-binding mutations in Kawaoka’s new virus trigger this transformation prematurely, reducing the virus’s ability to spread. The fourth mutation, T318I, stabilizes the protein, so that it changes shape at the right time. It also makes the virus more resistant to high temperatures. All four mutations are necessary for the virus to recognize the right cell and infect it successfully. “That’s the value of our paper,” says Kawaoka. “It’s not just about identifying mutations. It’s about identifying the mechanisms through which they work.”

Another group had already found a similar mechanism at work in a hybrid H9N2–H3N2 virus4. This virus could spread between ferrets only after acquiring one mutation that allowed it to recognize the right receptors and a second that stabilized the fusion process. The need for specificity and stability may be common requirements for easy transmission.

H5N1 strains in Egypt and some other countries in the Middle East already carry the N158D mutation, as well as other mutations that let the virus bind to human-type receptors. Some also have a mutation in the PB2 gene, which is associated with effective virus replication in mammals. All that is missing is a stabilizing mutation.

Kawaoka says his experiments suggest that rather than watching for specific mutations, it is more important to scan for the traits they bestow. If a virus shows signs of binding to human cells, one further test can show how dangerous it is: heat it to 50 °C to check its stability. “It’s a very simple assay,” he says.

The study provides “the first clues about what properties of the HA protein, other than receptor specificity, might be important for mammalian airborne transmission”, says Racaniello. “It would have been a huge loss not to publish this.”