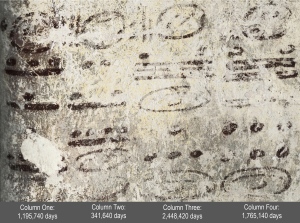 A table of numbers in four columns represent specific intervals that are multiples of the Mayan calendar and may relate to cycles of the Moon and planets.

Under an earthen mound deep in the Guatemalan rainforest, archaeologists have discovered what they say is the earliest evidence to date of the sophisticated astronomy and time-keeping rituals of the ancient Maya.

The find — dates, tables and depictions of lunar deities painted and carved onto the walls of a small chamber — was uncovered last year during excavations of the Mayan city of Xultun. The city was a thriving metropolis some 1,200 years ago, which corresponds to several of the dates in the mural.

“We think that this was a workspace for a calendar priest, a scribe or an astronomer,” says David Stuart, an anthropologist at the University Texas at Austin and co-author of a study of the paintings, which was published today in Science1. “It’s kind of like having a whiteboard in your office if you’re a physicist or a mathematician.”

The tables resemble those found in the Dresden Codex, a booklet made from tree bark that dates back to the Late Postclassic period of the Maya civilization, beginning around 1300. The Xultun paintings are the only sources to have been found that depict astronomical information from the Classic Maya period (around 250–900).

Odds were against the paintings’ survival and discovery. Although archaeologists mapped Xultun in the 1920s and 1970s, excavations did not begin until 2010. “In the intervening years, the site was heavily looted, absolutely ravaged,” says Bill Saturno, an archaeologist at Boston University in Massachusetts who is heading the Xultun excavation and co-authored the Science paper.

During a field season in March 2010, Saturno’s undergraduate student Max Chamberlain poked his head into one of the looter excavations and found an exposed wall, on which were what seemed to be strokes of red and white paint. Saturno decided to excavate 30 centimetres further and discovered a painting of one of Xultun’s rulers sitting atop his throne in a brilliant-blue-feathered headdress.

“Paintings are just not likely to be found. They don’t preserve well in the tropical Maya lowlands, unless you have special environmental conditions,” says Saturno. “The fact that it was so well preserved is pretty spectacular.” In this case, the Maya had carefully filled in the room with a mixture of stone, earth and ceramics before sealing the door, rather than collapsing the roof and levelling from above, as was customary when erecting new buildings.

Saturno decided to continue excavating, and to his surprise, every preserved wall yielded paintings adorned with Mayan hieroglyphs, including one of an orange figure with jade wristlets holding a stylus. The team also found an artefact: a device used to cut bark paper. Hieroglyphs covered the east wall, and in some cases, images had been plastered over to create new writing space. Two sets stuck out: an array of Mayan numbers, represented by bars and dots, on the north wall, and a 27-column table of numbers on the east wall.

Holding a desktop scanner up to the wall, Saturno and a colleague took images of the mural at night, when they could maximize the contrast and bring out details in the painting. Some of the symbols were not well preserved, and had to be reconstructed later on the basis of existing knowledge of Maya calendric calculations.

An analysis by Stuart revealed that the 27-column table represented dates, 177 or 178 days apart, with a different Moon deity depicted at the top of each column. The Maya are known to have recorded movements of the Moon in semesters of 177 and 178 days, or six lunar months. The table is similar to a multiplication table associated with the Dresden Codex’s lunar-eclipse table and “may have been used for calculating which god would be the patron of the Moon on which day”, Stuart hypothesized at a 10 May news conference to discuss the finding.

The table on the north wall contains four numbers, each of which represents a specific interval of days ranging from 935 to 6,703 years.All four numbers are multiples of a 52-year cyclic Mayan calendar, the researchers say, and could represent recurring events related to the cycles of Venus, the Moon, Mars and possibly Mercury.

“The Maya were wedded to this idea of commensuration — seeking numbers that are multiples of different integers,” says Anthony Aveni, a co-author and archaeoastronomist at Colgate University in Hamilton, New York. “I think it’s quite likely that what you have here are calendar-keepers who are seeking to mesh together big harmonious numbers by which the Universe is run.” 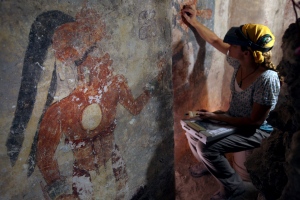 Conservator Angelyn Bass cleans and stabilizes part of a wall mural bearing the figure of a man who may have been a scribe.

Other experts say that the finding could be the kind of mathematical work that would have to have been done to compute the calendrical information seen in the Dresden Codex and other sources.

“A space like this would have to exist, but this is the first time it’s been found,” says Harvey Bricker, an archaeoastronomer at the Florida Museum of Natural History in Gainesville and professor emeritus at Tulane University in New Orleans, Louisiana.

“We’re getting a tantalizing glimpse of how these [paintings] and the codices are related,” says John Carlson, director of the Center for Archaeoastronomy in College Park, Maryland. “But we really can’t be certain why they were writing these inscriptions.”

Because the Mayan calendar is frequently misrepresented in popular culture as a harbinger of the apocalypse — an opinion not shared by scholars —  questions at the news briefing inevitably turned to this topic.  When prodded, the authors agreed that some of the larger numbers found in the chamber could refer to intervals that extend beyond  b'ak'tun 13 — a Mayan date popularized incorrectly as marking the end of the world.

The researchers identified 12 other etched or painted inscriptions in addition to those described in the Science paper, and analysis and excavation at Xultun continues. “We have 99.9% left to explore,” said Saturno. “We’re going to be working on it for many decades to come.”