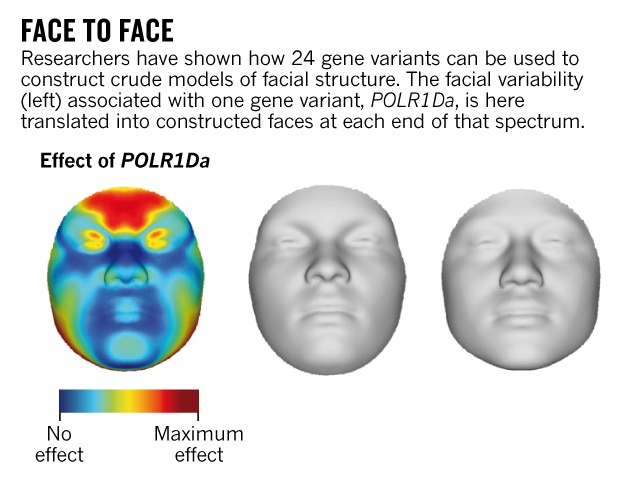 Leaving a hair at a crime scene could one day be as damning as leaving a photograph of your face. Researchers have developed a computer program that can create a crude three-dimensional (3D) model of a face from a DNA sample.

Using genes to predict eye and hair colour is relatively easy. But the complex structure of the face makes it more valuable as a forensic tool — and more difficult to connect to genetic variation, says anthropologist Mark Shriver of Pennsylvania State University in University Park, who led the work, published today in PLOS Genetics1.

Shriver and his colleagues took high-resolution images of the faces of 592 people of mixed European and West African ancestry living in the United States, Brazil and Cape Verde. They used these images to create 3D models, laying a grid of more than 7,000 data points on the surface of the digital face and determining by how much particular points on a given face varied from the average: whether the nose was flatter, for instance, or the cheekbones wider. They had volunteers rate the faces on a scale of masculinity and femininity, as well as on perceived ethnicity.

Next, the authors compared the volunteers’ genomes to identify points at which the DNA differed by a single base, called a single nucleotide polymorphism (SNP). To narrow down the search, they focused on genes thought to be involved in facial development, such as those that shape the head in early embryonic development, and those that are mutated in disorders associated with features such as cleft palate. Then, taking into account the person’s sex and ancestry, they calculated the statistical likelihood that a given SNP was involved in determining a particular facial feature.

This pinpointed 24 SNPs across 20 genes that were significantly associated with facial shape. A computer program the team developed using the data can turn a DNA sequence from an unknown individual into a predictive 3D facial model (see 'Face to face'). Shriver says that the group is now trying to integrate more people and genes, and look at additional traits, such as hair texture and sex-specific differences.

Kun Tang, a biologist at the Shanghai Institutes for Biological Sciences in China, says that facial reconstruction is turning out to be much more difficult than predicting, say, skin pigmentation. “One thing we’re certain of: there's no single gene that suddenly makes your nose big or small,” he says. The task is complicated further, he adds, by environmental factors, such as exposure to specific climates, which is hypothesized to influence the structure of faces.

Tang’s group has also been looking for genes associated with individual facial features, using an even more detailed scan that produces 30,000 data points per face. In a paper published in December 2013, Tang and his colleagues reported taking similar high-resolution 3D images of 1,001 Han Chinese, and trying to connect the faces to their genomes2. The researchers found five SNPs — different ones from those identified by Shriver’s group — that were significantly correlated with several facial features. For instance, one gene known to be involved in causing cleft palate strongly predicted lip shape in Han Chinese women. Tang says the group is now in the process of adding thousands more people of different ethnicities from around the country to see whether there are regional differences in facial structure.

Manfred Kayser, a forensic molecular biologist at Erasmus University Medical Center in Rotterdam, the Netherlands, says that although these 3D-modelling tools could be very useful in the future as the genetic predictors are developed, at present the genetic analyses in the two papers are of limited value.

Even seemingly simple features such as height have proved difficult to predict. A recent paper from Kayser’s lab reported an analysis of nearly 10,000 Dutch volunteers, taking 180 SNPs into account. It found that it was possible to predict whether a person would be unusually tall with reasonable accuracy, but not nearly as well as eye colour can be predicted3. “This is a large number of SNPs explaining a not-so-large number of height variations,” he says.

Faces will be much more difficult, he adds, and creating a test that looks at all of the possible SNPs will be a technical challenge requiring samples of high-quality DNA in more than trace amounts — a luxury that forensic investigators rarely have.