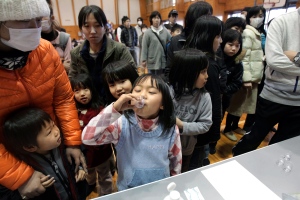 Children evacuated from the Fukushima region take potassium iodide to prevent thyroid cancer after the Fukushima Daiichi nuclear disaster of 2011.

The World Health Organization this morning released a relatively reassuring report suggesting few health impacts from the 2011 disaster at the Fukushima Daiichi nuclear power plant in Japan. But the accident is likely to cause small, but significant, increases in cancers in populations in a few hotspots exposed to higher radioactive doses.

These conclusions regarding the worst nuclear accident since Chernobyl in 1986 could be less comforting than they sound: In fact, Japan dodged a bullet thanks to the weather. The pattern of prevailing winds during the accident meant that most of the radioactive materials released from the plant were blown out to sea. The results therefore say little about the health risks of any future nuclear accidents.

"Had the winds been less favourable, the consequences could have been more serious than Chernobyl," says Keith Baverstock, a radiobiologist at the University of Eastern Finland in Kuopio.

The WHO's assessment last year of the doses of radiation received by the population in the area provided the basis for the health-risk estimates in today's report.

The report, drafted by a panel of international experts in radiation risks and public health, concluded that there was no additional cancer risk for the population in most of Japan — even most parts of Fukushima Prefecture — or in neighbouring countries. But the risks were slightly increased in hotspots such as Iitate village and Namie town, which were contaminated by plumes of fallout to the northwest of the plant.

In such hotspots the WHO panel estimated that the fallout has increased the risks of most cancers in children by only a few percent — though for thyroid cancer in young girls the increased risk was put at 70%. These figures are relative risks, however, and the absolute risks are less alarming. For thyroid cancer the baseline lifetime rate in women is 0.75%, so the risk in hotspots would be increased by 0.50%.

"Given the projected very low frequency, 3.2 per 10,000, of radiation-associated thyroid cancer among young people, it is unlikely that any excess would be detectable by the usual epidemiologic approaches," says Roy Shore, head of research at the Radiation Effects Research Foundation in Hiroshima, and a co-author of the WHO report. Most emergency workers were estimated to have minimal increased risks but around one-third had a small but significant increase in cancer risks.

Experts will probably argue intensely over the report during the coming weeks and months. Although many say the report is well done, the exercise largely depended on modelling of radiation doses rather than on direct measurements of population exposures, and the data were often sub-optimal.

"One of the major problems for those of us interested in estimating the public-health consequences of the accident has been the paucity of reliable data," says Baverstock. "That problem still persists. If the WHO data are not better than we have been able to obtain, then the resultant estimates will be of limited value."

Geraldine Thomas, a radiation-health expert at Imperial College London, argues that the report's cancer risks are likely be overestimates, as its authors openly erred on the side of caution in various assumptions. "Very few members of the population will have been exposed to any more than a lifetime dose equivalent to a single whole-body CT scan," she says.

Greenpeace on the other hand claims that the report is flawed. “The WHO report shamelessly downplays the impact of early radioactive releases from the Fukushima disaster on people inside the 20 km evacuation zone who were not able to leave the area quickly,” says Rianne Teule, a nuclear expert at Greenpeace International.

But the apparently limited health effects of the accident may have been largely a fluke, Baverstock says. "The health consequences of this accident are smaller than Chernobyl because of the very favourable wind direction, out over the Pacific ocean, and the fact that there are no near neighbours," he says. Tokyo, he adds, is less than 200 km away. "Had the winds prevailed in that direction, Fukushima would have been a whole different story."