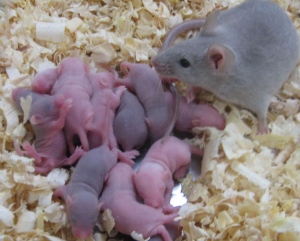 Mouse pups created using lab-made eggs went on to be fully fertile themselves.

Japanese researchers have coaxed mouse stem cells into becoming viable eggs that produce healthy offspring1. The work provides a powerful tool to study basic elements of mammalian development and infertility that have long been shrouded in mystery.

People have been trying to make sex cells from embryonic stem cells and from pluripotent cells for years, says Evelyn Telfer, a reproductive biologist at the University of Edinburgh, UK. “They’ve done it — and they’ve done it really well.”

Stem-cell scientists have derived many types of cells from stem-cell precursors, but have struggled with sex cells. These cells have significantly more complex developmental programmes, in part because of the difference in the way they divide. Most cells in the body undergo mitosis, in which both sets of chromosomes are copied, but sex cells are produced by meiosis, which results in cells containing a single copy of each chromosome.

Last year, the same team from Mitinori Saitou’s lab at Kyoto University in Japan successfully used mouse stem cells to make functional sperm2. Whereas sperm cells are some of the simpler cells in the body, oocytes are much more complex.

“It was always believed that making sperm was probably easier,” says Davor Solter, a developmental biologist at the Institute of Medical Biology in Singapore, who was not involved with the study. “The oocyte is the thing which makes the whole of development possible.”

In the latest study, published today in Science, Saitou and his colleagues started with two cell types: mouse embryonic stem cells and induced pluripotent stem cells, which can be derived from adult cells. Just as in the earlier sperm study, they used a cocktail of signalling molecules to transform the stem cells first into epiblast cells and then into primordial germ cells (PGCs), both egg precursors. Whereas male PGCs could be injected directly into infertile male mice to mature into sperm, the female version required further coddling.

The researchers isolated embryonic ovary tissue that did not contain sex cells and then added their lab-made PGCs to the dish. The mixture spontaneously formed ovary-like structures, which they transplanted into female mice. After four weeks, the stem-cell-derived PGCs had matured into oocytes. The team fertilized them and transplanted the embryos into foster mothers. The offspring that were produced grew up to be fertile themselves.

PGCs are scarce and difficult to isolate from mice, so researchers know little about their regulation, says Saitou. As PGCs develop into sperm or egg cells, certain genes are silenced in a process called genomic imprinting. Although this is crucial for development, little is known about how it starts or how genes are selected for silencing.

The details of meiosis are also poorly understood — particularly in oocytes, which remain dormant from the point at which they are formed in the female embryo until an organism starts ovulating. “That’s the biggest immediate impact of this work,” says Saitou. “Because we have succeeded in making functional sperm and oocytes, we can really study what is happening in this important lineage.”

Many of those questions will also have relevance to fertility research, says Telfer.

Saitou’s group is now trying to make PGCs from human rather than mouse cells. That could prove difficult because of differences between human and mouse stem cells. What’s more, practical and ethical implications mean that the researchers won’t be able to obtain human ovary tissue with which to culture the cells.

But with enough tinkering of the technique, says Solter, “usually such things end up being possible”. If the approach works in humans, he adds, it might also provide an unrestricted source of oocytes for use in research. “Right now,” he says, “using oocytes has this moral and legal burden.”