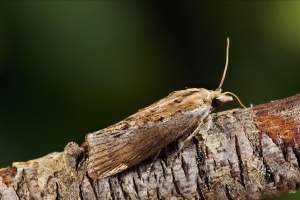 The greater wax moth (Galleria mellonella) can hear sounds of a higher frequency than any bat can produce.

Many moths have evolved sensitive hearing that can pick up the ultrasonic probes of bats that want to eat them. But one species comes pre-adapted for anything that bats might bring to this evolutionary arms race. Even though its ears are extremely simple — a pair of eardrums on its flanks that each vibrate four receptor cells — it can sense frequencies up to 300 kilohertz, well beyond the range of any other animal and higher than any bat can squeak.

“A lot of previous work has suggested that some bats have evolved calls that are out of the hearing range of the moths they are hunting. But this moth can hear the calls of any bat,” says James Windmill, an acoustical engineer at the University of Strathclyde, UK, who discovered the ability in the greater wax moth (Galleria mellonella). His study is published in Biology Letters1.

Windmill's collaborator Hannah Moir, a bioacoustician now at the University of Leeds, UK, played sounds of varying frequencies to immobilized wax moths. As the insects “listened”, Moir used a laser to measure the vibrations of their eardrums, and electrodes to record the activity of their auditory nerves.

The moths were most sensitive to frequencies of around 80 kilohertz, the average frequency of their courtship calls. But when exposed to 300 kilohertz, the highest level that the team tested, the insects' eardrums still vibrated and their neurons still fired.

Until now, the highest known hearing range of any insect belonged to the North American gypsy moth (Lymantria dispar), which can hear frequencies up to 150 kilohertz2. Some bats can make and hear calls of up to 212 kilohertz3. But the greater wax moth easily smashes both records.

“This shocking increase in the frequency sensitivity of moths' ears will require researchers to rethink the system,” says William Conner, who studies animal communication at Wake Forest University in Winston-Salem, North Carolina. “Most [scientists] normally don't think of testing at frequencies this high, nor do they have the equipment to do so.”

“It makes us wonder about the hearing capabilities of other insects, even those that have been investigated extensively,” adds Fernando Montealegre-Z, a sensory biologist at the University of Lincoln, UK. Crickets, praying mantises and lacewings are all sensitive to the ultrasonic cries of bats, but are usually tested on frequencies below 150 kilohertz.

Why has the wax moth evolved to hear sounds so high-pitched that no bat can make them? Recording ultrasonic calls is difficult, so it is possible that researchers have simply been underestimating the calls of bats, just as they did the hearing range of moths.

But Windmill has a different explanation. As a side effect of its sensitivity to high frequencies, the moth’s eardrum vibrates for only a short time after being hit by a pulse of sound. This allows it to distinguish between courtship calls of its own species, which consist of extremely closely spaced pulses, and bat calls, which are separated by much longer intervals.

Windmill now wants to investigate how the moth manages to hear across such a wide frequency range, from 20 kilohertz (the highest frequency audible to humans) to the record-breaking 300 kilohertz. “As an engineer, I know that we would struggle to design an artificial version of this ear,” he says. “We are, however, working on it.”