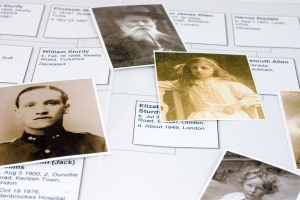 Any two Europeans are likely to have had a common ancestor several centuries ago.

Whether they are a Serb and a Swiss, or a Finn and a Frenchman, any two Europeans are likely to have many common ancestors who lived around 1,000 years ago. A genomic survey of 2,257 people from 40 populations finds that people of European ancestry are more closely related to one another than previously thought, and could help to bring about new insights into European history.

The first efforts to trace human ancestry through DNA relied on ‘uniparental genetic markers’ — DNA sequences from the mitochondrial genome, which is inherited through mothers, or on the Y chromosome, which men inherit from their fathers.

Those studies captured the broad strokes of human history, such as Homo sapiens' migration out of Africa less than 100,000 years ago and their subsequent colonization of Europe and Asia. But uniparental markers do little to inform more recent history, in part because they represent only a single lineage in a family tree — such as a mother’s mother’s mother, and so on.

In recent years, researchers have looked to the rest of the genome — the DNA that can come from either parent — to understand ancestry. In the latest study, population geneticists Peter Ralph, now at the University of Southern California in Los Angeles, and Graham Coop, at the University of California, Davis, looked to the entire genome to reconstruct European ancestry. Their work is published today in PLoS Biology1.

The researchers' approach relies on the way in which genes are reshuffled each generation, when an individual forms new egg or sperm cells by mixing and matching the chromosomes he or she inherited from each parent. As a result of this process, a person’s genome is made from interspersed chunks of his or her ancestors’ chromosomes. The locations where DNA sequences are swapped are different each time, so that the uninterrupted segments a person passes down become shorter with each generation. For instance, the chunks of DNA shared between first cousins are longer than those shared between second, third and fourth cousins.

Gene-sequencing companies such as 23andMe, based in Mountain View, California, use this property to connect distant cousins enrolled in their databases. Ralph and Coop looked for even more distant relatives by identifying stretches of the genome shared by people living throughout Europe. By looking at the length of these chunks, the researchers were able to determine approximately when distant cousins’ common ancestor lived.

They found common ancestors from as recently as 500 years ago mainly within populations. Older stretches of DNA, however, connected more geographically distant Europeans.

The work also uncovered genetic signatures for key events in European history, such as the migration of the Huns into Eastern Europe in the fourth century, and the later rise of Slavic-speaking people there. Present-day inhabitants of Eastern European countries share many ancestors who lived around 1,500 years ago, Ralph and Coop found. Italians, meanwhile, are connected to other European populations mainly through individuals who lived more than 2,000 years ago, perhaps as a result of the country's geographic isolation.

Studies such as this one have the potential to solve longstanding historical questions, says Coop. It has been unclear, for instance, whether the expansion of Slavic languages was driven by migration of Slavic-speaking people, cultural diffusion or both. Genetic studies “can tell us how people moved, rather than just what’s in the written record”, Coop says. John Novembre, a population geneticist at the University of Chicago in Illinois, says that the study marks “a huge step in that direction”.