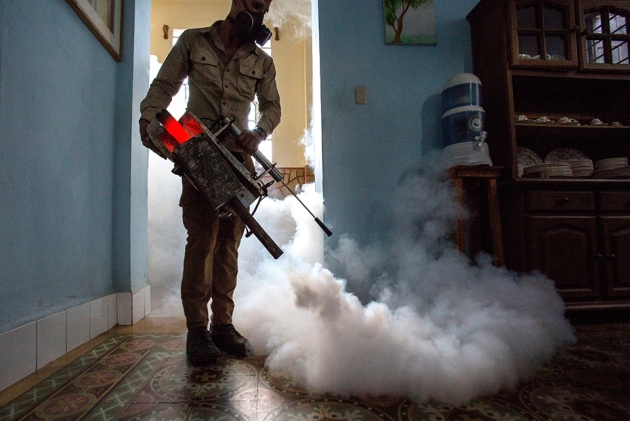 A fumigator sprays a Havana home with pesticide to kill mosquitoes. Eradication campaigns across Cuba have helped to ward off Zika until now.

As soon as the rain stops, mosquitoes flood the guard house of an upscale tourist resort near Cuba’s Bay of Pigs. Without hesitation, one of the guards reaches under his desk to pull out a device that looks like a very large hair dryer. “Mosquito gun,” he says. He walks around, spraying a thick, white cloud of fumigant that engulfs the booth. Slowly, the mosquitoes disappear.

It’s not uncommon to see clouds of pesticide wafting through Cuba’s houses and neighbour­hoods. It is largely because of such intensive measures by ordinary citizens that the country has been among the last in the Caribbean to succumb to local transmission of Zika. As of 11 August, Cuba has recorded three people who were infected by local mosquitoes rather than contracting the illness abroad, compared with 8,766 confirmed cases in nearby Puerto Rico (see ‘Zika in the Caribbean’).

Although scientists and public-health officials are disappointed that Zika has finally arrived in Cuba, they are not surprised. “It’s not easy to avoid an introduction, because a lot of people are coming to Cuba from a lot of places,” says Maria Guzmán, head of virology at the Pedro Kourí Tropical Medicine Institute in Havana. The country has recorded about 30 confirmed imported cases.

Zika is especially insidious because most people who have it show either no symptoms or only common ones such as fevers, which could be attributed to other illnesses. Yet, with the exception of one locally acquired case in March, Cuba mostly managed to keep Zika out until this month. 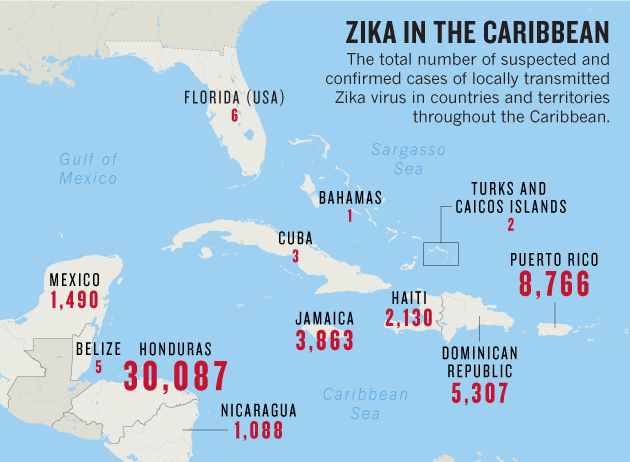 That success was the result of its excellent health-care system and an extensive surveillance programme for vector-borne diseases that the government set up 35 years ago, says Ileana Morales, director of science and technology at Cuba’s public-health ministry.

In 1981, Cuba saw the first outbreak of haemorrhagic dengue fever in the Americas, with more than 344,000 infections. “We turned that epidemiological event into an opportunity,” says Morales. The country sent medical workers to affected areas and began intensively spraying pesticides to eradicate the Aedes aegypti mosquito that carries the disease.

It also created a national reporting system, as well as a framework for cooperation between government agencies and public-education campaigns to encourage spraying and self-monitoring for mosquito bites, even among children. One of the most effective measures was a heavy fine for people found to have mosquitoes breeding on their property, says Duane Gubler, an infectious-disease researcher at Duke–NUS Medical School in Singapore. With all these measures in place, Cuba eliminated the dengue outbreak in four months.

Now, when another outbreak threatens, “it’s no problem for us to reinforce our system” and intensify such efforts, says Morales.

In February, before any Zika cases had been detected in Cuba, the government dispatched 9,000 soldiers to spray homes and other buildings, while workers killed mosquito larvae in habitats such as waterways. Airport officials screened visitors arriving from Zika-infected countries and medical workers went from door to door looking for people with symptoms. The health-care system already conducts extensive prenatal examinations, so it is primed to detect Zika-caused birth defects such as microcephaly. 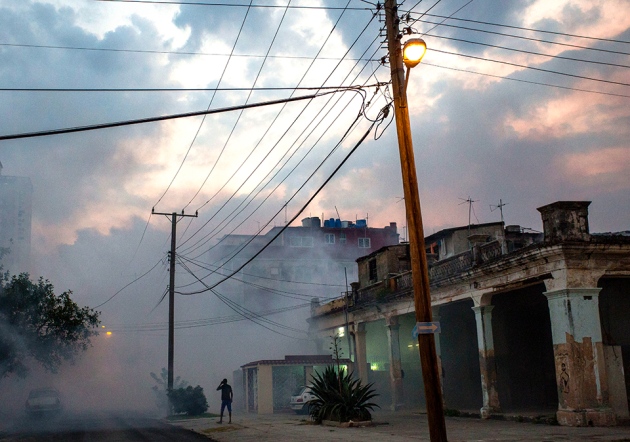 Clouds of pesticide waft through a neighbourhood in Cuba.

Cristian Morales, head of the Cuba office of the Pan American Health Organization (PAHO), says that it is probably unrealistic for other countries to simply copy Cuba’s mosquito-control programmes. The country’s health-care network is one of the best in the developing world, and the decades-long stability of its government has ensured policy continuity and enforcement of measures such as fines. He adds that the most important aspects of a response, for any country, include collaboration between government sectors and increased surveillance.

“Cuba probably does a better job of controlling mosquitoes than any other country in the Americas, but it hasn’t been totally effective,” says Gubler. This is partly due to dips in funding. A resurgence of dengue in 1997 was probably exacerbated by the fall of the Soviet Union, Cuba’s major trading partner, which decimated the economy and weakened health funding.

Another disadvantage stems from the 56-year-old US trade embargo, which prevents Cuba from acquiring drugs and medical supplies that include components made in the United States. It must instead buy them from other countries, such as China, often at higher cost.

Yet success has come despite these issues. According to PAHO, health workers have intensified efforts to spray pesticides and eradicate standing water — where mosquitoes can breed — within 150 metres of the homes of each of the two most recent people to get Zika, in the southeastern province of Holguin. Workers are also searching houses for infected people and collecting mosquitoes for study. Guzmán adds that Cuban researchers have begun to plan work on a Zika vaccine.

She says that international cooperation will be important in helping Cuba and others to address Zika. “It’s a problem of everybody. It’s a new challenge for the world.”