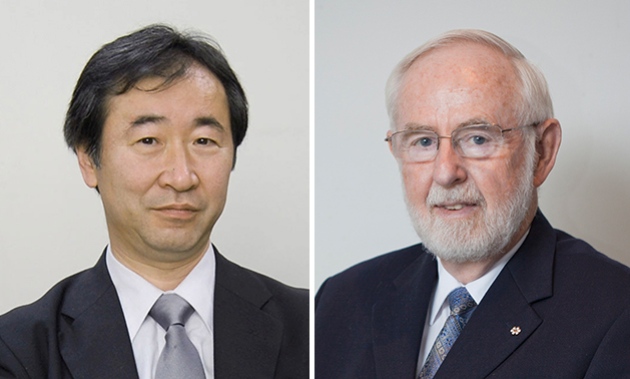 Two researchers who helped to demonstrate that neutrinos oscillate between types, or 'flavours', as they travel — which proved that the ghostly particles have mass — have won this year's Nobel Prize in Physics.

The standard model of particle physics — the current best explanation of the Universe’s particles and forces — struggles to explain why neutrinos have mass. So the two teams’ discoveries, in 1998 and 2001, spurred a wave of new experiments seeking to pin down the neutrino’s properties.

“Other than the Higgs boson, I’d say this is the biggest discovery in particle physics in the last 30 years,” says Daniel Hooper, a theoretical physicist at the University of Chicago in Illinois.

Neutrinos come in three flavours: electron, muon and tau, names that relate to the sister particle they are produced with. They are more abundant than any other particle in the Universe except the photon: every second, billions of them stream through every square centimetre on Earth. But they interact so weakly with other matter that remarkably little is known about them.

The first hint that neutrinos were stranger than expected came in the 1960s. But an experiment at the Homestake gold mine in South Dakota threw up a mystery: it detected fewer electron-type neutrinos streaming from the Sun than theorists had predicted. (Alongside Masatoshi Koshiba of the University of Tokyo, Raymond Davis, who led the Homestake experiment, later shared half of the 2002 Nobel Prize in Physics for developing techniques to detect such neutrinos from space).

Kajita’s group began unravelling this conundrum in 1998, when it reported that neutrinos might change flavours as they travel. Muon neutrinos created in collisions between cosmic rays and Earth’s atmosphere seemed to disappear on their way to the Super-Kamiokande detector, a steel tank filled with pure water located in a zinc mine.

Conclusively proving this, however, meant not just spotting ‘disappearing’ neutrinos, but showing they had turned into other flavours. The Sudbury team, using a tank of water in a nickel mine more than 2,000 metres beneath Earth’s surface, announced in 2001 that neutrinos oscillated between flavours as they travelled from the Sun to Earth.

“There was certainly a eureka moment in this experiment when we were able to see that neutrinos appeared to change from one type to the other in travelling from the Sun to the Earth," said McDonald, speaking today on the telephone to journalists at the Royal Swedish Academy of Sciences in Stockholm. 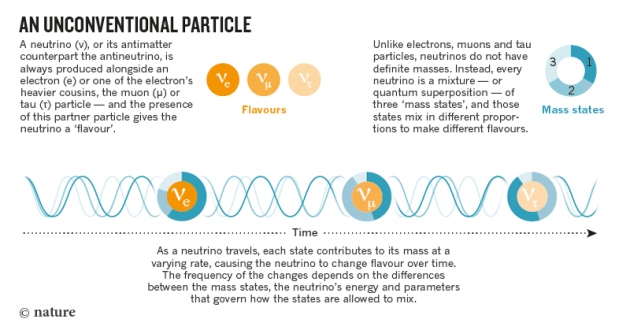 The discovery has profound implications. Rather than the three neutrinos having no mass, or indeed any fixed masses, physicists now reason that neutrinos must be made from mixtures — or quantum superpositions — of three different mass states, which change in proportion as the particles travel. Pinning down the properties of neutrinos and their antimatter counterpart, antineutrinos, could lead to an understanding of physics beyond the standard model, says André Rubbia, a neutrino physicist at the Swiss Federal Institute of Technology in Zurich.

“We believe that differences in the way neutrinos and antineutrinos oscillate, for example, is the best possible explanation we have for why the Universe is today dominated by matter and not antimatter,” says Rubbia.

Another Japanese researcher, Yoji Totsuka, led the Super-Kamiokande project at the time of its 1998 discovery but died in 2008. He would have shared the prize if still alive, Rubbia believes.

An earlier version of this story implied that physicists knew about all three types of neutrino in the 1960s. The text has now been amended to avoid that.