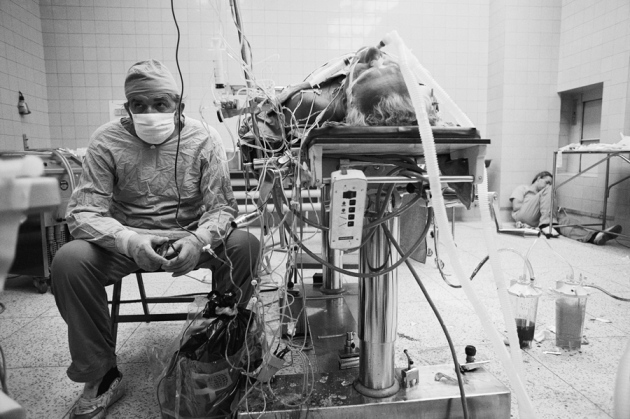 Surgeon Zbigniew Religa next to his patient after a 23-hour heart transplant in Poland in 1987.

In Steven Soderbergh’s classy television show The Knick, set in a New York City hospital in the early 1900s, competitive and obsessively driven surgeon-scientists work on the burning medical issues of the day — identification of blood groups to allow blood transfusions, for example, and facial reconstruction surgery that returns dignity to those disfigured by syphilis.

Would-be healers have been testing surgical procedures since the Iron Age first delivered the necessary cutting tools. And the need for surgical advances remains. From the first heart transplant in 1967 to the emergence of deep brain stimulation and hopes for regenerative medicine, research is needed to transfer benchside discoveries to the bedside.

It is a problem, then, to find that surgeons are increasingly turning their backs on research. Evidence suggests that, compared with a decade or two ago, surgeons apply for and receive fewer grants, publish less, and — perhaps most perniciously — feel that research is not part of their role. Anecdotal reports suggest the trend is widespread, and not restricted to the United States — where it is best documented.

The latest report on the subject, published last September in Annals of Surgery, indicates that, according to two different measures, academic surgeons’ interest in research in the United States is falling in linear fashion (S. G. Keswani et al. Ann. Surg. http://doi.org/b52r; 2016).

The report, compiled by the Society of University Surgeons (SUS), looked at grants awarded by the National Institutes of Health (NIH) to the 25 top-funded academic medical centres, and found that the proportion of funding to surgical departments dropped from 3% to 2.3% over the period 2006–14. Within individual medical faculties, the proportion of money going to surgical departments also fell. This is consistent with earlier studies showing that fewer surgeon-scientists apply for NIH grants and that those who do tend to be less successful than their medical colleagues in non-surgical disciplines (S. J. Rangel and R. L. Moss Surgery 136, 232–239; 2004).

The SUS report also looked at the number of abstracts submitted to the annual Academic Surgical Congress between 2011 and 2015, and found that the proportion relating to basic science fell by 24%.

What is behind this dismaying trend? In a survey conducted among academic surgeons in 2000, the majority of respondents reported a belief in the value of basic scientific research, even if they were finding that growing clinical and administrative duties hindered their success. But by the time of the SUS report, there had been a mood shift. Some 1,000 academic surgeons responded to a survey that the authors carried out. More than half said that basic research was a priority in their departments — but just one-third said that it was realistic to expect surgeons to succeed in basic research. Most respondents said they had neither the time nor the motivation for research, and in any case lacked adequate departmental support and funding. Nearly two-thirds believed that basic research among trainees should be limited to a select few residents with the ambition and talent to be successful in future research activities.

“Policymakers must stop seeing surgeons as easy sources of revenue.”

Non-surgical medical departments are not affected in the same way. This is probably because the time pressures on surgeons are even greater than those on other physicians. Surgeons are faced with the same increases in administrative duties as other medical-faculty members, but their clinical duties have grown faster. US hospitals depend increasingly on the income that surgeons generate — and have little motivation for encouraging them to spend time on research.

The flow of surgeons out of research is a problem that must be recognized and stopped. Translational medicine needs them too much. Transplantation and transplant immunology have always been dominated by surgeons, and these areas are set to embrace a future that includes regenerative medicine and possibly xenotransplantation (transplantation of tissues and organs from other species). They are also much needed for crucial research into surgically treated diseases that only rarely hit the headlines — particularly in the correction of congenital birth defects, but also in adult disorders that rely on surgical skills, such as pancreatic cancers.

Involvement in research also allows surgeons to develop rigour in their everyday work, and to judge — and so maintain and improve — the quality of the work done by their peers.

Policymakers must create a health-care environment in which hospitals have incentives to think of patient care as inevitably linked to science, and to stop seeing surgeons as easy sources of revenue. But that’s not going to happen any time soon. In the meantime, and at the very least, funding agencies should make it less burdensome for busy surgeons to apply for grants — and, in response, academic surgeons should apply more often, and thus increase their chances of success.