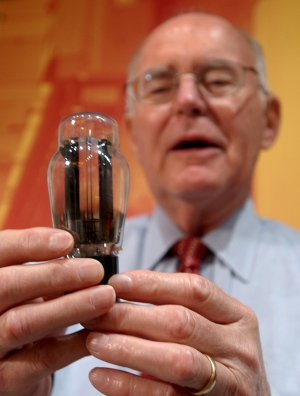 Intel co-founder Gordon Moore holding a vacuum tube, a precursor of the transistor. His prediction that transistor cost would decrease exponentially over time seems to apply to a wide range of technologies.

Predicting the future of technology often seems a fool’s game. In 1946 for example, Thomas J. Watson, founder of International Business Machines — now known simply as IBM — is said to have made the prediction that the world would need just five computers. But US researchers now say that technological progress really is predictable — and back up the claim with evidence regarding 62 different technologies.

The claim is nothing new. But what a group of researchers at the Santa Fe Institute in New Mexico and the Massachusetts Institute of Technology (MIT) in Cambridge, Massachusetts, have done is to put it to the test.

In a study published in PLoS ONE1, they compared several mathematical laws that purport to describe how the costs of technologies evolve, and found that the most accurate was one proposed as early as 1936.

That proposal was made by aeronautical engineer Theodore Wright, who pointed out that the cost of aeroplanes fell as the number of planes manufactured rose2. Specifically, he said that the cost was proportional to the inverse of the number of planes manufactured raised to some power. This theory has since been put forward as a more general law that governs the costs of technological products, and is often explained on the basis that, the more we make, the better and more efficient we get at making.

But much more famous than Wright’s law is a relationship proposed in 1965 by Gordon Moore, co-founder of the microelectronics company Intel. He observed that computer power per dollar was increasing exponentially over time3 — which means, in effect, that the cost per transistor was falling exponentially.

Several other relationships between scale and cost of production have been suggested: for example, that costs fall purely because of economies of scale. All these ‘laws’ predict that costs will fall over time, but each suggests a slightly different rate.

“These hypotheses haven’t really been tested against data before,” says MIT's Jessika Trancik. She and her collaborators collected data for 62 technologies, ranging from chemicals production to energy devices (such as photovoltaic cells) and information technologies, spanning periods of between 10 and 39 years. “Assembling a large enough data set was a big challenge,” says Trancik.

The researchers evaluated the performance of each six such ‘laws’ using hindcasts — use of earlier data to predict later costs — and then looked at how these compared with the actual figures.

In fact, the laws didn't differ much at all. The most accurate was Wright’s law, but Moore’s law was close behind, at least for a relatively modest time horizon of a few decades. The predictions were so similar for these two laws, in fact, that the researchers suspected they might be related.

A link seems quite likely. In 1979, political scientist Devendra Sahal pointed out that if production of an item grows at an exponential rate, then Wright’s law and Moore’s law are equivalent4. The data confirm that production does indeed grow exponentially for a wide range of products. “You wouldn’t necessarily expect that,” says Trancik.

That Moore’s law applies at all to so many different industries is a surprise, since computing has often been regarded as a special case. “It’s a much more general thing,” says author Doyne Farmer, currently at the University of Oxford, UK.

Economist William Nordhaus of Yale University in New Haven, Connecticut, warns that almost by definition the laws will work only for technologies that survive, so they can’t predict the trajectory of very young technologies. “History is written only about the victors,” he says. “Those technologies that didn’t make it in the market don't make it into the data set. This is one reason why it is so difficult to forecast which of many nascent energy technologies will survive.”

The future of some technologies depends crucially on governmental policies, not just conventional market forces. For example, the evolution of climate-change technologies, in which Nordhaus specializes, will depend on the future pricing policies of carbon emissions. “Some technologies, such as carbon capture and storage, won’t even get off the ground with a zero carbon price,” he says.

Estimating the potential costs of climate-change mitigation technologies is one of the main applications the researchers envisage for their findings. The results seem to imply that stimulating growth through public policies might accelerate the fall, as Wright’s law implies. “We have more control over these things than we might think,” says Farmer.