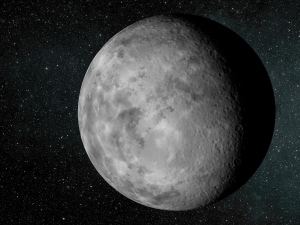 A newfound world called Kepler 37 b could easily blend in to the long and growing list of known extrasolar planets, given its nondescript name. But the new addition to the catalogue of 800-plus exoplanets stands out in at least one major respect—it is far smaller than any planet yet discovered outside of our solar system. In fact, it is just a shade larger than Earth’s moon.

“What makes this very interesting is this is a planet smaller than anything we see in our own inner solar system,” says Thomas Barclay, a research scientist at the NASA Ames Research Center in Moffett Field, Calif. Barclay is lead author of a study published online February 20 in Nature announcing the discovery of Kepler 37 b and two slightly larger worlds in the same planetary system. (Scientific American is part of Nature Publishing Group.)

The researchers used NASA’s Kepler space telescope to identify the three planets orbiting Kepler 37, a star some 200 light-years away that is somewhat smaller than the sun. The spacecraft monitors more than 150,000 stars in the Milky Way for occasional winks, or dips in brightness, that might be caused by a planet passing in front of its star, from the probe’s perspective. The Kepler mission has already discovered more than 100 new planets since its launch in 2009 and has identified thousands of additional candidates that await confirmation.

Planets smaller than Earth block relatively small amounts of starlight, which limits astronomers’ ability to detect them with Kepler. But the star Kepler 37 is bright and relatively free of disturbances, such as starspots, that can obscure a faint planetary signal. By observing the planet Kepler 37 b as it transited, or passed in front of its star, more than 50 times, Barclay and his colleague drew out a subtle but recurrent pattern. Every 13 days or so the star dimmed by a tiny fraction—just 0.002 percent—as the tiny planet passed across the star’s face.

The exoplanet that previously held the record on the tiny end of the size spectrum—a Mars-size object known as Kepler 42 d—is nearly twice the diameter of Kepler 37 b. The newfound body is just 80 percent Mercury’s diameter and 30 percent that of Earth. (Kepler measures the diameters and orbital properties of exoplanets but is usually unable to pinpoint their masses.) All three of the exoplanets found by Barclay and his colleagues, in fact, will rank among the smallest known: Kepler 37 c is 74 percent the diameter of Earth, and Kepler 37 d is roughly twice our planet’s diameter.

Orbiting its star at one tenth the distance between Earth and the sun, tiny Kepler 37 b must be extremely hot. “Any water on the surface would disappear very quickly,” Barclay says. “There is almost no chance of an atmosphere or liquid on the surface.” The researchers predict that Kepler 37 b would be a barren, rocky world similar to Mercury. The larger worlds in the planetary system orbit somewhat farther out but would still suffer scorching heat from the star.

All three planets keep closer to the star Kepler 37 than any planet orbits the sun. “It just shows that Kepler has just an extraordinary ability to see a wide diversity of planetary architectures,” says Greg Laughlin, a professor of astronomy and astrophysics at the University of California, Santa Cruz, who did not contribute to the new study.

Kepler was built to search for exo-Earths—rocky planets in cooler orbits than the uninhabitable worlds of the Kepler 37 system. But in the meantime it has found numerous planetary systems that little resemble ours. “What Kepler is also showing, and this is a side dividend to the main mission, is that the galactic planetary census is a lot different than we had believed from looking at our own planetary system,” Laughlin says. “Our solar system just contains nothing whatsoever inside Mercury’s orbit. But it turns out that the average planetary system has a lot going on in the inner region.”

There is one catch in Kepler’s search for worlds comparable with or smaller than Earth: Whereas giant Jupiter-size planets often exert a gravitational tug on their host stars that is detectable with Earth-based telescope spectrographs, smaller exoplanet discoveries have proved difficult to confirm with observations other than Kepler’s. So researchers have turned to statistical arguments instead to quantify the probability of a false positive—for instance, a pair of undetected binary stars whose regular eclipses mimic a planetary signal. Barclay and his colleagues used computer modeling to identify potential false positives and then rule them out with additional observations from the ground. In the end, based on population estimates of exoplanets, binary stars and other astronomical objects, the researchers calculated the probability that the signal collected from Kepler represents a true planet. “In this case, with the innermost planet we are confident that it is a true planet orbiting the target star with a confidence of 99.95 percent,” Barclay says. “So we’re very confident that this is what we think it is."