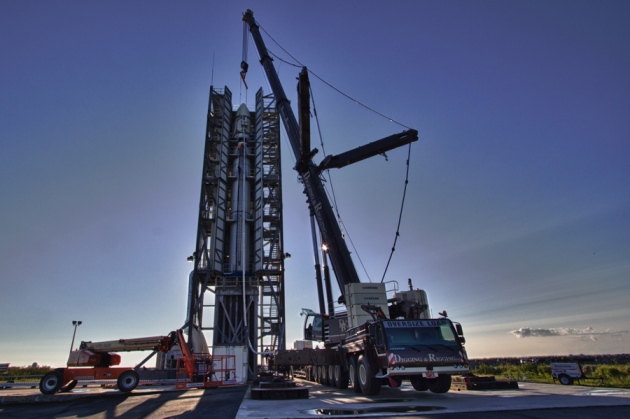 On 6 September, NASA plans to send a vacuum cleaner to the Moon. Called the Lunar Atmosphere and Dust Environment Explorer (LADEE), the orbiter will collect dust and gas molecules to figure out what floats above the Moon and how it got there. "These mysteries have not really been addressed since the Apollo missions," says Rick Elphic, LADEE project scientist at the NASA Ames Research Center in Moffett Field, California.

The US$263-million project began in 2008 as part of former US president George W. Bush’s vision for returning astronauts to the Moon. Lunar dust had been a big problem for the Apollo missions: the sticky, abrasive stuff clung persistently to spacesuits and wore down equipment — breaking the seals on boxes protecting samples of Moon rock, for instance.

NASA no longer plans to send people to the Moon. But LADEE could herald a new way of building interplanetary spacecraft. Instead of designing a one-off vehicle specialized for the Moon — NASA’s usual approach — LADEE’s engineers drew up a blueprint for a craft that can be adapted for other missions, cutting research and development costs. "It could save as much as half of the price," says Peter Klupar, the former director of engineering at Ames.

Borrowing a concept from the commercial satellite industry, Klupar and his colleagues designed the spacecraft's body to be modular, built in layers like a cake. Segments can be swapped in and out or customized depending on requirements. For example, one arrangement would yield an orbiter suitable for monitoring the Sun, while another possible configuration could land on asteroids.

In its current incarnation, LADEE will look for the cause of a twilight glow above the Moon's horizon, seen by NASA's robotic Surveyor missions of the 1960s. Apollo astronauts orbiting the Moon also noticed unusual patterns of light. In 1972, on Apollo 17, astronaut Eugene Cernan scribbled a description on a sketch pad, noting that the light "came from non existense [sic] to subtle in nature then just before sunrise quickly sharp"1.

In each case something was catching the light. Dust motes seemed to be the obvious candidate. With no wind to lift dust from the Moon's surface, researchers suggested solar radiation as the cause. Ultraviolet light and X-rays on the day side of the Moon could strip negatively charged electrons off atoms in the dust during the day, imparting a positive charge to grains. On the dark side, electrons carried by the solar wind could give dust grains a negative charge. In both cases, charged dust particles would repel each other, like strands of hair rubbed by a balloon, allowing clouds of dust to float up from the Moon's surface.

Although small-scale laboratory experiments have shown that lunar dust can behave in this way, there has been no definitive detection of this process on the Moon — researchers do not know how much dust could be lifted in this way or how high it could go. An instrument left on the surface by Apollo 17 in 1972 recorded some signs of charged dust particles moving slowly above the surface. "The evidence is circumstantial so far,” says Mihály Horányi, a physicist at the University of Colorado Boulder. “There are other possible explanations for the observations." For instance, a 2011 reanalysis of the signal from the surface instrument blamed it on electrical interference from heaters that warmed the instrument at night2.

Horányi built the dust sensor on LADEE to help settle the debate. The orbiter will fly at altitudes of between 20 and 50 kilometres above the Moon's surface. Fine grains of dust striking the instrument will generate a current to reveal the total quantity of dust. Because dust clouds levitated by solar radiation are predicted to move around, following the Moon's cycles of night and day, the current should strengthen every time the spacecraft flies into a sunrise. 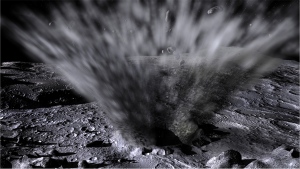 At the end of its mission, LADEE will crash into the lunar surface, beaming data back all the way to the end.

Another LADEE instrument will sniff out gases dislodged from the surface by solar radiation. Once thought to have no atmosphere at all, the Moon has been found to have a wispy 'exosphere' containing molecules such as helium and potassium. LADEE will search for silicon, magnesium and other elements ejected from Moon rocks, as well as materials deposited on the Moon by comets, including methane and carbon dioxide. The spacecraft will also demonstrate a new laser-communication system designed by NASA to boost the bandwidth of data transmission from space.

A successful mission could spur other spin-offs of the modular spacecraft, says Elphic. But so far, the only endeavour to have shown interest in the modular design publicly is the company Odyssey Moon, based in the Isle of Man. The firm had been jockeying to win the $30-million Google Lunar X PRIZE, a competition to put a lander on the Moon by 2015. In partnership with NASA, Odyssey Moon planned to adapt the modular orbiter blueprints for its entry. But in November, the company teamed up with competitor SpaceIL, and now, Odyssey Moon will help the Israeli non-profit organization to build its own spacecraft instead.

With no other missions lined up, Klupar worries that the clock may be ticking for the modular experiment. "There is a time limit on these things," he says. "If we wait 5 years for the next mission, the technology will have aged."