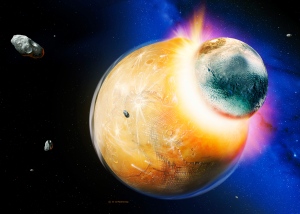 The Moon-forming impactor may have been four or five times the size of Mars, or much smaller, according to new models.

In the widely accepted model for the Moon's formation, a renegade, Mars-sized body dubbed Theia slammed into the infant Earth 4.5 billion years ago and kicked up a disk of debris that then coalesced to build the satellite. The model has racked up many successes, including accurate predictions of the mass of Earth and the Moon. But it also predicts that most of the lunar-forming debris came not from the proto-Earth but from Theia, which is thought to have originated from a different part of the Solar System with different abundances of certain elemental isotopes. That conflicts with increasingly sensitive measurements of the past decade showing that rocks from Earth and the Moon have identical isotopic ratios of oxygen, titanium, chromium and tungsten.

By putting different spins on the old impact model, two teams of researchers now report that they have solved the chemical conundrum and upheld the lunar origin theory. But they predict very different sizes for Theia: one smaller than Mars1, and one four to five times bigger2. “The two papers show that a wide variety of impact scenarios are possible,” says Sarah Stewart of Harvard University in Cambridge, Massachusetts, a co-author on one of the papers, both of which are published today in Science.

Both teams assume that Earth once rotated about twice as fast as it does now, because of the Moon-forming collision or previous impacts. Although a fast-spinning Earth is natural consequence of impacts, researchers had studiously avoided such a possibility because no one had figured out a way to slow Earth back down to its present-day rate of rotation. Stewart and her co-author Matija Ćuk, of the SETI Institute in Mountain View, California, show that a known but often-overlooked gravitational interaction between the Moon and the Sun could have drained the spin of a rapidly rotating Earth1.

In the other study, Robin Canup of the Southwest Research Institute in Boulder, Colorado, one of the originators of the Mars-sized impact model, now considers a collision in which the impactor and the fledgling Earth had identical masses, about half of Earth’s current heft2. When two equal-mass bodies collide, they would mix so thoroughly that the isotopic composition of the debris would be indistinguishable from that of either body. The impact would also have revved up Earth’s spin, and Canup invokes the same gravitational mechanism invoked by Stewart and Ćuk to slow it down.

The mechanism, known as evection resonance, comes about when the short axis of the Moon’s elliptical orbit around Earth precesses in sync with the orbit of Earth about the Sun. In this configuration, some of the angular momentum from a rapidly spinning Earth would be transferred to the Moon, which in turn allows the rotational energy to be absorbed by the Sun.

Theorist John Chambers of the Carnegie Institution for Science in Washington DC, says that both teams present convincing arguments for forming a Moon with an identical isotopic composition to that of Earth, although he notes that it is unlikely that exactly equal-mass bodies would have collided in the early Solar System, as required by Canup.

Other theorists are creating plausible Moons by tweaking the impactor's speed and angle of impact rather than size. Andreas Reufer of the University of Bern in Switzerland and his colleagues, for example, describe a model in which an impactor hits Earth with such high velocity that it generates an unusually high proportion of terrestrial material in the debris disk3. The researchers don't need to invoke the spin-down mechanism, because the disk is so hot that some of the material is lost into space, carrying with it some of Earth’s excess angular momentum.

“The positive take-home message is that this is a very lively and evolving area, both on the observational side and on the theoretical modelling side,” says planetary scientist David Stevenson of the California Institute of Technology in Pasadena, a referee of the Science papers. “The game goes on.”