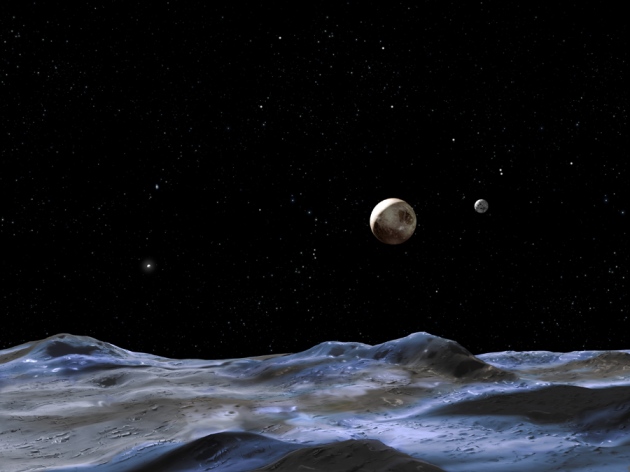 A view of Pluto imagined from one of its moons. Names are being considered for the fourth and fifth moons.

Over breakfast one day in 1930, Falconer Madan, a librarian at the University of Oxford, UK, read a newspaper report about a newly discovered planet to his 11-year-old granddaughter. Little Venetia Burney piped up: why not name the new world Pluto? Madan passed the tip to a friend, a well-connected astronomer at the university. Within two months, what was then considered the ninth planet got its name.

Eight decades later, the public is still fascinated with naming other worlds, but the process of doing so can be contentious. In the coming weeks, the International Astronomical Union (IAU) in Paris, the organization in charge of nomenclature, is expected to decide on the names of the two most recently discovered moons of Pluto, now classed as a dwarf planet.

The IAU is considering two names submitted by the discovery team: Vulcan and Cerberus, the top vote-winners in a popular contest run by the SETI Institute in Mountain View, California. Star Trek actor William Shatner suggested Vulcan, the runaway winner with more than 174,000 votes.

Even as people chuckle over the naming of Pluto’s moons, tension is rising in another realm of celestial nomenclature: extrasolar planets. Nearly 1,000 exoplanet discoveries have been confirmed. With thousands more on the horizon, some scientists are saying that it is time for selected exoplanets to receive popular and easy-to-remember names, in addition to their technical codes, which do not exactly trip off the tongue. One example is HD 209458 b, a Jupiter-sized gas giant discovered in 1999 — the first exoplanet to be found by watching for a dimming of its parent star’s light.

In February, Uwingu, a space-education company based in Boulder, Colorado, launched a public contest, asking for contributions to what it calls “a baby book of names” for astronomers to draw on. Suggesting a name cost US$4.99; voting was 99 cents. In March, Uwingu focused the contest to solicit names for the planet around the nearby star α Centauri B. Uwingu co-founder Alan Stern, a planetary scientist at the Southwest Research Institute in Boulder who helped to discover Pluto’s newest moons, hopes that people will refer to the exoplanet by whichever name wins, regardless of whether the IAU endorses it.

Proceeds from Uwingu’s competition, after expenses, are to be donated to space exploration and education projects, says Stern. By the time it ended on 22 April, the contest had received 1,242 nominations and 6,178 votes, for total earnings of around $10,000. The winning name was Albertus Alauda, a Latinized version of the name of the nominator’s late grandfather. But on 12 April, the IAU issued a press release titled “Can One Buy the Right to Name a Planet?”. Without mentioning Uwingu by name, it re-asserted the IAU’s role as the official astronomical namer. Uwingu countered with a release pointing out that many informal names for astronomical objects remain in use despite not getting IAU approval. For example, some astronomers have used Osiris as an informal name for HD 209458 b. And the IAU has sanctioned informal names for 17,766 of the Solar System’s 360,190 catalogued asteroids.

Alain Lecavelier des Etangs, an astronomer at the Paris Institute of Astrophysics and chairman of the IAU exoplanet-naming commission, says that the group expects to make a decision on whether to adopt popular names within the next six months.

The IAU’s decision on the moons of Pluto is expected much sooner. However, the names Vulcan and Cerberus may not pass muster, because the IAU tries to avoid duplication. Vulcan is already the name of a hypothetical mini-planet once mooted to exist between Mercury and the Sun, and Cerberus is a 1.2-kilometre-wide asteroid. If the IAU rejects the proposed names, it will be up to Mark Showalter at the SETI Institute and his team, who discovered the moons in 2011 and 2012, to suggest alternatives.