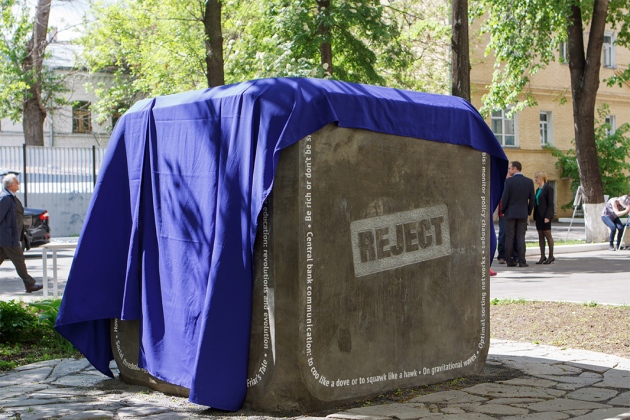 The ‘Monument to an Anonymous Peer Reviewer’ was unveiled at a ceremony at Moscow’s Higher School of Economics on 26 May.

A 1.5-tonne stone tribute to peer review is the latest addition to Moscow’s rich cultural heritage.

On 26 May, a good-humoured crowd of more than 100 people — including students, researchers and Russia’s deputy minister of education and science — gathered outside Moscow’s Higher School of Economics (HSE) to witness the unveiling of what is probably the world's first monument to peer review.

The sculpture takes the form of a die displaying on its five visible sides the possible results of review — ‘Accept’, ‘Minor Changes’, ‘Major Changes’, ‘Revise and Resubmit’ and ‘Reject’.

Last year, the director of the HSE’s Institute of Education, Isak Froumin, had asked his faculty for ideas about how to turn a useless block of concrete outside the university into something attractive and meaningful.

HSE sociologist Igor Chirikov suggested having the awkward lump chiselled into the die tribute, called 'Monument to an Anonymous Peer Reviewer'. “When I started working in academia I realized that there is an important role for peer reviewers, whose contribution is not always recognized,” says Chirikov, who splits his time between Moscow and the University of California, Berkeley. “At the same time, I feel for researchers — it’s hard to deal with rejection letters and, sometimes, nasty comments from reviewers.”

The idea struck a chord and Chirikov quickly mobilized a crowdfunding campaign to make it a reality. Researchers from all over the world pledged more than US$2,500 to the project.

The edges of each cube face are also carved with the titles of 21 papers; most are by the researchers who made the largest contributions to the funding campaign.

The monument has a tongue-in-cheek air about it, but the tribute is sincere, says Chirikov. “Peer review in academia is a story of love and hate” — but reviewers are “invisible heroes in science”, he says. “I thought that the monument would be the best way to pay tribute to their work.”