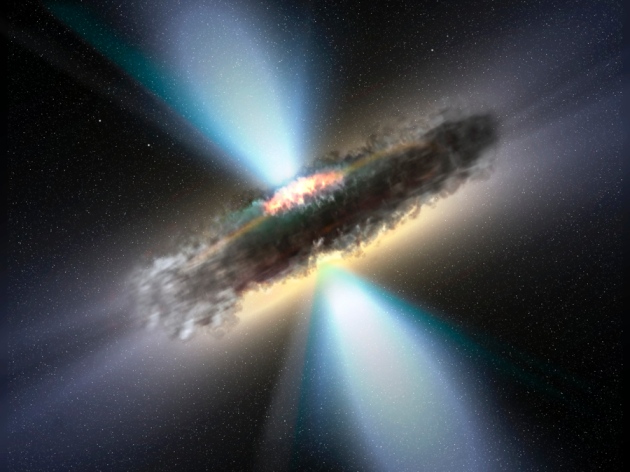 Matter falling into supermassive black holes can get so hot that it emits X-rays.

Astronomers have for the first time found strong evidence for a giant black hole in a Lilliputian galaxy. The finding suggests that supermassive black holes could be twice as numerous in the nearby Universe as previously estimated, with many of them hidden at the centres of small, seemingly nondescript galaxies known as ultra-compact dwarfs.

Anil Seth of the University of Utah in Salt Lake City and his colleagues report the findings on 17 September in Nature1. The team became intrigued by the ultra-compact dwarf galaxy M60-UCD1, some 16.6 million parsecs (54 million light years) from Earth, in part because its X-ray emissions suggested that it might house a black hole. Images taken with the Hubble Space Telescope showed that the galaxy harboured a high concentration of mass at its centre, but the team had no idea how heavy the putative black hole might be.

To weigh the beast, the researchers measured the velocity of stars whipping about the galaxy’s centre using an infrared spectrometer on the Gemini North telescope atop Mauna Kea in Hawaii. The high velocity of the stars is best explained by a central black hole that tips the scales at 21 million times the Sun’s mass, concluded Seth’s team. That is more than five times heavier than the black hole at the centre of the Milky Way — even though M60-UCD1 has an estimated diameter of about one-six-hundredth that of our home galaxy.

And whereas supermassive black holes typically have about 0.5% of the mass of the stars that are concentrated in the centre of their galaxies, the black hole in M60-UCD1 is about 18% of the mass of the galaxy's stars, enabling the gravitational monster to wield a much greater influence over the galaxy’s shape and structure. Recognizing the dominant role that some supermassive black holes have in the evolution of small galaxies is the most important result of the study, says astronomer Karl Gebhardt of the University of Texas at Austin.

“This is a very strong confirmation that small galaxies can have big black holes,” Gebhardt says. “This is a new class of galaxy — and that’s very exciting.”

At its current size, M60-UCD1 lacks the heft to have assembled such a massive black hole, but the galaxy might once have been much bigger, suggest Seth and his collaborators. They speculate that a collision with an even larger neighbouring galaxy, M60, stripped the outer parts of M60-UCD1 more than two billion years ago, leaving behind a dense remnant — the ultra-compact dwarf and its now oversized black hole. 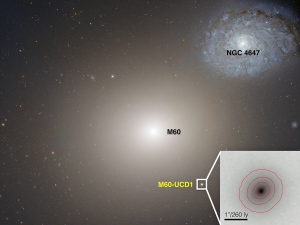